The exhibition takes as its starting point the notion that all artists have the capacity to be hopeful and that this inherent attitude is often counter to the subjects, ideologies, understandings and materials that artists are drawn to, as well as the very real and dramatic context in which art is made. 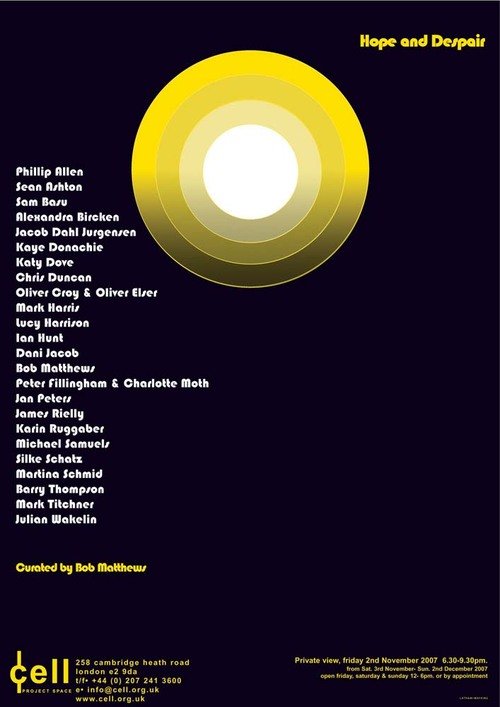 Hope and Despair is an exhibition that takes as its starting point the notion that all artists have the capacity to be hopeful and that this inherent attitude is often counter to the subjects, ideologies, understandings and materials that artists are drawn to, as well as the very real and dramatic context in which art is made.

The works within this exhibition have been chosen because of their relationship to this ambiguity. Whilst some works deal directly with notions of hopefulness, exuding a spirit of general positivity or worth, others are tinged with doubt and even propose a bleak future. Some works seem to champion past artistic movements and ideologies, adopting the aspirational strategies of a previous generation, perhaps in the hope of continuing the inquiry. Other works reflect upon current ideas of experimental and communal living and notions of political and social change. Other works deal more directly with an attitude towards materials and making, where formal investigations have the potential for re-growth.

Oliver Croy & Oliver Elser’s film Counter-Communities (2003) is a documentary film about five alternative architecture projects in the USA that all share common origins to the 'Utopian tendencies' of the 1960s/70s. This project looks directly at 'idealistic' impulses and is exemplified within Buckminster-Fuller's Dome Village, which provides accommodation for the homeless in Downtown Los Angeles.

Kaye Donachie’s paintings utilize found film footage of counterculture groups where rebellious and revolutionary activities become the source material to investigate group dynamics and power structures. Donachie considers painting an appropriate medium through which to probe radical beliefs and their paradoxes. Her interest lies in manipulating cultural references that have, over time, become embedded in our collective consciousness.

Katy Dove’s works in both painting and flim evoke the early 20th-century abstract paintings and the films of Viking Eggeling, Oskar Fischinger and Len Lye. The paintings on show here demonstrate the apparent optimism within mesmeric compositions and forms.

Chris Duncan’s laboriously rendered works on paper reflect a preoccupation with process and transformation, and deals with the essentials of form and structure. This artistic activity creates ephemeral moments which champion the transient nature of human existence. Duncan pursues the visible threads between nature, science, and spirituality by reduction of image and ideas into forms of energy.

Peter Fillingham & Charlotte Moth’s collaborative sculpture utilizes found objects of domestic use to perform a celebratory function within the gallery space. Construction is at the heart of this venture and various craft-forms are evoked.

Lucy Harrison’s recent projects have involved specific communities and sites where collaborations, interventions and activities have forged links and opened new possibilities for contrasting audiences and groups. The work for this exhibition is from archive material and shows the artist when she was 8 years old posing for a protest image against the activities at Greenham Common.

Ian Hunt is a writer on art and a poet. His contribution to this exhibition is a text that reflects on the themes and issues surrounding hopefulness.
Ian Hunt lives and works in London.

Dani Jakob’s work evokes a multitude of styles and cultural references including German Romanticism, esotericism, Hip-Hop, Heavy Metal and Far-Eastern as well as Western genres of cultural history. The ironic, forthright mixture of signs and symbols fragments the viewer‘s perspective into a myriad of meaningful possibilities, further emphasized by the unusual choice of material.

Bob Matthews’ paintings and sculptures reflect upon recent visits to communes in Germany. Reworking utopian motifs such as the hanging mobile, and considering the kaleidoscopic properties of various transparent materials he creates openly optimistic and well-meaning artworks that relate to eachother. This ongoing project is drawn to the possibility that the right arrangement of inanimate objects may have the possibility to cause change.

Jan Peters’ films are personal explorations and over many years have documented and charted his personal feelings about society and culture. He makes films in a fast-talking diary documentary style alternating gently between fact and fiction, comedy and tragedy. His work features anecdotes about his immediate circle of friends commenting on the multicultural and historical realities of everyday life. This exhibition includes his film Wie ich ein Höhlenmaler wurde (How I became a cave painter).

James Rielly’s works on paper depict quietly intense memories of childhood. Thinly veiled washes of paint on thick handmade paper create a mood of tactility and sensitivity that can be in stark contrast to the darker, more brooding subjects that underlie the apparently latent imagery.

Karin Ruggaber’s wall based sculptures use unpredictable casting processes in combination with natural and artificial materials to create subtle variations in texture and colour tone. These complex collage-like constructions come from an interest in architectural facades where erosion and incongruity of surface can open up subtle formal relationships.

Michael Samuels’ sculptures utilizing everyday furniture are built through an initial process of deconstruction and then meticulous reconstruction to achieve new and various architectural, formal and playful sites. A Lilliputian relationship to scale combined with nostalgic recycling opens up the potential for re-growth.

Silke Schatz’s drawings, collages and sculptures reflect her interest in architecture as both a public and private space. Recent work is informed and inspired by the German artist and teacher Ewald Mataré whose utopian public artworks and sculptures evoke a period of pure celebration within the cultural life of a city. Schatz’s work for this exhibition takes this connection further by combining Mataré’s work within exuberant collages, prints and sculptures.

Martina Schmid’s recent paintings evolve from an initial mark-making process that responds directly to formal impulses where the selection of palette tones is gleamed from various personal sources. The structures within the paintings evoke the spirit of Modernist ideology and the apparent aging of the surface mimics the remnants of historic works such as weathered murals.

Barry Thompson’s makes intricate and densely worked pencil drawings that depict images of idyllic landscapes. Although composed from personal memories of a childhood hideaway in suburban Essex, the scenes are somewhat generic, and act as visual triggers for the romantic ideals we all project on the natural world.

Mark Titchner’s art explores the tensions between the different belief systems that inform society, be they religious, scientific or political. Presenting conflicting ideologies and outmoded ideas without mockery or cynicism he allows the viewer to form their own conclusions. In so doing, his works questions both our blind faith in science and our obedience to authority.

Julian Wakelin’s paintings are both heavily worked and playfully spontaneous in equal measure. Through a combination of subtle layering and gestural flare the paintings evoke the early heydays of expressive abstraction, yet on closer inspection his work reveals and questions the extent to which the activity of painting itself has become self-referential, where the final spirit of painting, the act itself, has now become paramount.

Phillip Allen’s works exude a genuine optimism towards the activity of painting. Thick encrusted layers of paint line the top and bottom integrating the physical artist’s palette within the surface of the painting. Intertwining a range of patterns and shapes that construct illusionary space, referencing a long lineage of painting styles and gestures.

Sean Ashton is an artist and writer. His contribution to this exhibition is a text that reflects on the themes and issues surrounding hopefulness. His first book Sunsets and Doghists, published by Alma Books was released this year.

Sam Basu’s other worldly sculptures consider craft, design and arcitecture as worthy of revolution. Over the past year Basu has inhabited a factory complex in a remote part of central France. Working in isolation, he is slowly reshaping a number of disused industrial buildings by hand. From this base Basu is also continuing his own experimental research project, the Institute of Transmitted Architecture “set up to monitor the spontaneous descriptions of dwelling and community that appear outside of the architectural world.” The factory complex also operates as his studio.