Next Exit. Solo show. The new series of drawings depicts the often banal and frequently universal imagery of the roadways and streets in the urban and suburban environment through freeway driving. 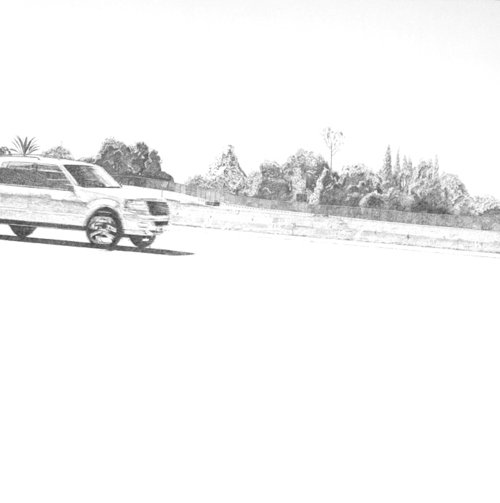 The new series of drawings depicts the often banal and frequently universal imagery of the roadways and streets in the urban and suburban environment through freeway driving. Referencing the act of intra-city travel, “Next Exit” also explores the places that lie just beyond the exit ramp.

In Jennifer Celio’s work there is an attempt to extract the hidden beauty in the ordinary places that she commutes on a daily basis. The myriads of freeways and roadways have all played critical routes of transport at various points of the artist’s life. Although driving and negotiating the entanglement of traffic can be an all-consuming experience, she finds herself distracted by situations or objects that are visible just beyond the roadway.

The nurseries alongside the concrete riverbed in suburban Downey are a common sight that she has incorporated, for example, into “Riding the Graffiti Highway.” The process and the stories behind the changing landscapes of suburban sprawl and urban deterioration and renewal fascinate her. The subjects of her drawings lead the artist to immortalize one moment in their tale and to find the correlation to her personal route in life.

Utilizing a laborious and detailed technique in graphite pencil on white gessoed wood panels, Celio seeks to portray a world hidden in plain view by creating representational images floating in a sea of white. This allows the subject to be viewed without surrounding influences in a still and calm world on the panel's surface. These drawings are comprised of thousands upon thousands of tiny, directional pencil lines, creating obsessive yet realistic images. The simplicity of the graphite pencil reduces the representation to a quieter beauty, a place of both emotion and objective observation.

Each "Next Exit" can deliver either diversion or the familiar, both the banal and the surprisingly extraordinary.
Jennifer received a B.F.A. in Drawing and Painting from California State University, Fullerton in 1996. She was born and raised in the Los Angeles area and currently lives and works in Long Beach, CA .