Banzai! The artist photographs street scenes in Tokyo, which at first sight seem to show quite normal people on normal streets. A closer look reveals details that we, as Western viewers, find strange, weird or even grotesque. 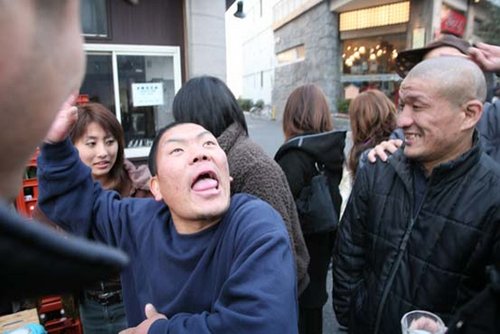 In his third solo exhibition at Galerie Barbara Weiss Boris Mikhailov (born 1938 in Kharkov, Ukraine) is presenting photos taken in Tokyo in winter 2006/07 for the first time. Mikhailov first attracted attention in the West with his photo series of homeless people in Kharkov, Case History, and has received many international awards for his photography, including the Hasselblad Award.

"I want to know what is real Japan and what is the difference between Japan and me", was Boris Mikhailov's motto, as he embarked on his first long stay in Japan with his digital camera. With a selection of around thirty framed and unframed colour photographs in very differing formats and quality, Mikhailov presents a concentrate of his observations on life in a large Japanese city. His aim is also to give the viewer an opportunity to reflect on his or her own expectations of what a "Japan exhibition" might be.

The exhibition /Banzai!*/ concentrates on perfectly "normal" life in the city, quite similar to Mikhailov's earlier exhibition at Galerie Barbara Weiss, /In the Street (Berlin),/ 2004. Mikhailov photographs street scenes spontaneously, which at first sight seem to show quite normal people on normal streets. A closer look reveals details that we, as Western viewers, find strange, weird or even grotesque, a feeling we share with the photographer himself. Mikhailov does not show us the hip, consumer-oriented youth of the metropolis, nor does he show us typical businesspeople. Instead he looks at old, poor, or particularly small people, and is interested in their sense of isolation, or their relations to each other, their faces, gestures, clothes, and body language. Another focus in this exhibition is the subject of "love", which Mikhailov also visualises by means of photographs from a museum of the erotic. Here -- and elsewhere - Mikhailov is interested in the question as to how traditional Japanese society and also sexuality and pornography have been transformed through American influence since the capitulation of Japan in 1945.

A third group of photographs turns to "politics" -- in an ironic gesture Mikhailov shows himself with his fist raised in defiance, imitating the well-known writer and political activist Mishima Yukio (1925-1970), who committed seppuku ritual suicide (hara-kiri) after a failed appeal to his supporters. The artist also confronts us with pictures of homeless people lined up at a soup kitchen, or with people who live under a permanent sense of fear after the poison gas attack of 1995, and now wear face masks as they move through the city.

Boris Mikhailov's critical and respectful view is aimed at various cultures. As an observer who was born in the former Soviet Union, he reveals social ambivalence that is not normally seen in standard clichéd images of Japan. In English /Banzai/ means "Hurrah!", as a battle cry.