Remix Paintings. The artist has revisited the most provocative aspects of his own history, such as 'Die grosse Nacht im Einer' and 'Die grossen Freunde', and made new versions or interpretations of them, with the experience of hindsight. The paintings are radical transubstantiations - part-caricature, part-ghost - of their muted, more ponderous predecessors. The spontaneity with which they are executed gives rise to mnemonic flashes of things in the past, present, and future. 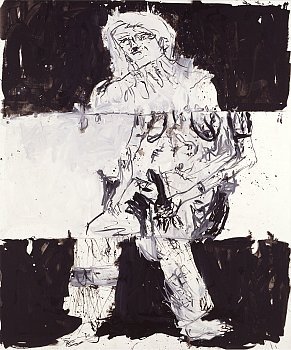 "If you're remixing popular music you change the rhythm or the sound…What I do is something entirely different. I have thought for a long time about what to call what I do.
I liked the word 'remix' because it comes from youth culture.

What I could never escape was Germany, and being German."
--Georg Baselitz

Gagosian Gallery is pleased to announce an exhibition of recent paintings by Georg Baselitz.

Baselitz's long and challenging career is marked by intense periods of activity, usually culminating in a heroic masterpiece or group of master works, followed by startling renewal and rethinking of his subject. A traditional artisan, he works in equally traditional media---painting, drawing, printmaking, and wood sculpture—often on a monumental scale.

From the outset, Baselitz confronted the visceral realities of history and the human and cultural tragedies of a world in turmoil with a cast of tragic anti-heroes, from the grotesque, masturbating boy of Die grosse Nacht im Einer(Big Night Down the Drain) of 1963, to the broken soldiers of the Fracture paintings and the inverted figures of the disturbing "upside-down paintings." In 1980, at the German pavilion at the Venice Biennale, he caused a stir with a monumental carved wooden figure, which appeared to making a Hitlerian salute. Evidently, what it is to be German and a German artist have been very much on Baselitz's mind throughout his career –paintings abound with child Hitlers and dismembered woodcutters-- although his oeuvre owes as much to a broader range of influences, including art brut and the drawings and writings of Antonin Artaud, as well as the sixteenth century German woodcuts and African sculptures. With the reunification of Germany in 1990, however, the angst seemingly ebbed from his vision and he produced a series of paintings that he refers to as "sentimental pictures" about his childhood, home, and family in the former East German province of Saxony.

In the recent Remix Paintings, Baselitz has revisited the most provocative aspects of his own history, such as Die grosse Nacht im Einer and Die grossen Freunde, and made new versions or interpretations of them, with the experience of hindsight. Enlarged and rapidly painted with swathes of bright, transparent hue across white canvas and explosive, meandering lines, the Remix paintings are radical transubstantiations – part-caricature, part-ghost-- of their muted, more ponderous predecessors. The spontaneity with which they are executed gives rise to mnemonic flashes of things in the past, present, and future. The references to Hitler, once ambiguous, are now clearly articulated. The impulse to improve, clarify, and update is clearly evident, but the haunting, fleeting quality of the Remix work has also to do with a mature artist's meditations on time, presence, failure and possibility.

Georg Baselitz was born in 1938 as Hans-Georg Kern in Deutschbaselitz, Saxony. His work has been exhibited extensively in solo and group exhibitions internationally since the early sixties, and was the subject of a major retrospective at the Solomon R. Guggenheim Museum in 1995, traveling to the Los Angeles County Museum, the Hirshhorn Museum and Sculpture Garden, Washington D.C., and the Nationalgalerie, Berlin. Currently, a retrospective of his work is on view at the Royal Academy of Arts, London. Baselitz lives in Munich, Germany and Imperia, Italy. The Remix Paintings were recently shown at the Pinakothek der Moderne, Munich, and the Albertina, Vienna. This is the first time that they will be shown in the U.S.

A fully illustrated catalogue, with an essay by Jill Lloyd, Associate Scholar at the Courtauld Institute of Art and a specialist in twentieth century Austrian and German art, will be available.

Opening reception for the artist: Friday, November 9th, from 6 to 8 pm