Of Two Minds, Simultaneously. The first comprehensive retrospective in Europe by the America. The exhibition follows his almost inimitable development up till now, starting with his collages from the 1990s. The extensive exhibition contains some 90 works that give a nonlinear, non-chronological survey of artist's oeuvre in all its diversity, seen from different angles. In the Shadow Cabinet a shadow curator has invited Alberto de Michele, whose installation focuses on an Italian bank robber who for a period of time was hiding in Amsterdam. 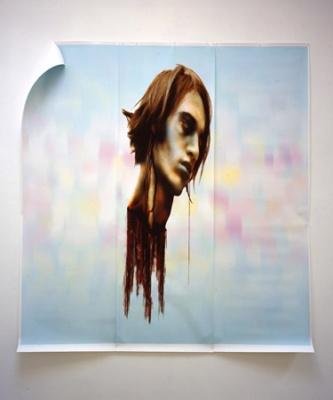 De Appel presents the first comprehensive retrospective in Europe by the American artist Richard Hawkins (USA, 1961). The exhibition follows Hawkins' almost inimitable development up till now: starting with his collages from the 1990s; intriguing because they show how a powerful artwork can originate from very few visual means, right up to his recent dolls' houses transformed into brothels that herald another completely new direction in Hawkins' heterogeneous oeuvre.

The extensive exhibition contains some 90 works that give a nonlinear, non-chronological survey of Hawkins' oeuvre in all its diversity, seen from different angles. In his work Hawkins looks both critically and appreciatively at social, cultural and historical phenomena, mixing these with autobiographical motives to create a multiform body of work linked by countless internal references in ideas, material and style. These formal and internal links resonate throughout the whole Appel exhibition space as components of themes that range from male desire, gender issues and pop star idolization to the struggle of mixed-race Native Americans or the function of hermaphrodite statuary in the Roman era.

The Los Angeles-based Hawkins began his career as a curator and writer. He first became active as an artist in the early 1990s and now ranks as one of the most remarkable artists from the American West Coast. Hawkins' earliest, invariably erotically-tinged collages, consist of photos of film celebrities, male models or porn stars, their contexts remodelled and turned into compositions which tease out homo-erotic admiration and desire. This obsessive desire is mixed with a certain sweet nostalgia as private yearning blends with public images. The late 1990s saw the creation of the controversial series "Disembodied Zombies"; inkjet prints with decapitated heads of idealized male icons bleeding profusely from their severed necks against brightly coloured polychrome backgrounds. Horror and fantasy are interwoven in these alluring, shocking works.

Quite suddenly towards the end of the 1990s, Hawkins began to wield a paint brush, resulting in a diverse series of paintings typified by an extraordinarily flexible aesthetic and wide ranging thematic variation. Brushy "pure abstraction" in garish, lively hues lead into figurative history paintings in which Hawkins reworks his own Creek Indian roots and that place him in the tradition of such urban satirists and American Scene painters as Reginald Marsh and Philip Evergood. More recent vividly painted canvases of bar scenes in the sex-tourism industry of S.E. Asia, described by Hawkins himself as "hallucinations from a Viagra overdose", sit next to another new segment of his work, "Urbis Paganus", an ever-expanding series of collages that celebrate the diversity of gender and sexualities under pagan rule.

To accompany the exhibition a publication with contributions by a.o. Ann Demeester and Bruce Hainley will be issued. For more information please contact Edna van Duyn at ednavanduyn@deappel.nl

In addition to its regular menu -- the exhibitions -- de Appel is offering a selection of 'side dishes' -- additional events that run from lectures and book presentations to the mini-exhibitions in the Shadow Cabinet. In The Shadow Cabinet past and present students from the Curatorial Programme (CP), the course for young talented curators which de Appel has been running since 1994, are invited to present their own projects to a wider public in the former director's office. This time a shadowcurator has invited Alberto de Michele (IT/NL 1980), whose installation focuses on an Italian bank robber who for a period of time was hiding in Amsterdam.

Within the framework of the lecture series 'Indian Summer 2007,
Artists' lectures', Richard Hawkins will give a lecture at De Ateliers in Amsterdam.
For more info see: http://www.de-ateliers.nl Reservations at: office@de-ateliers.nl