Life in a High-Rise. For the first time since 1910, Germany was invited to participate in the annual exhibition of the Societe des Artistes decorateurs, which was held at the Grand Palais in Paris. The Section allemande encompassed five large gallery spaces devoted to a theme chosen by Gropius (joined by a team of previous Bauhaus colleagues): living in a ten-storey boarding house. 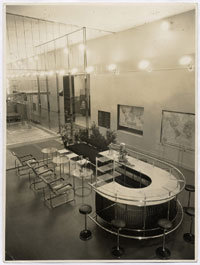 Only a few modernist exhibitions have attained the degree of importance attached to the 1930 exhibition of the German Werkbund in Paris. It combined an uncompromising design approach with a new social model – the vision of modern life in a high-rise apartment building. Responsibility for the exhibition lay with Walter Gropius, who was joined by a team of previous Bauhaus colleagues: Herbert Bayer, Marcel Breuer and László Moholy-Nagy.

For the first time since 1910, Germany was invited to participate in the annual exhibition of the Société des Artistes décorateurs (Association of French Interior Designers), which was held at the Grand Palais in Paris from 14th May to 13th July 1930. The Section allemande (German section) encompassed five large gallery spaces devoted to a theme chosen by Gropius: living in a ten-storey "boarding house".

The highlight of the Section allemande was the design of a spectacular communal area, which offered both collective and individual recreational activities to residents (coffee bar, dance floor, library), with a special emphasis on health and fitness (swimming bath, gymnastics equipment, massage tables). The communal area had the elegant atmosphere of a modern club, without a trace of mandated collectivism. In another gallery, Marcel Breuer furnished a model apartment with lean tubular steel furnishings as a demonstration of what a space-saving habitation for a couple without children might look like.

Herbert Bayer created an unusual display of recent German architecture by suspending panoramic photographs from the ceiling at different angles. On the walls, identical chairs were hung in vertical rows as a visual illustration of the principles of serial production. This latter intention was similarly evident in an exhibit of standardized utilitarian objects, which demonstrated Germany's major contribution to the development of modern manufactured products.

The Section allemande also included a dramatic presentation of experimental theatre design. László Moholy-Nagy's Light-Space Modulator – a kinetic light sculpture – was shown for the first time in a reflective housing with coloured incandescent bulbs. With the 1930 Werkbund exhibition in Paris, Gropius and his team presented a radically modern view of Germany to an international audience. To commemorate the 100th anniversary of the founding of the German Werkbund, the Bauhaus Archive has reconstructed the communal area, the architectural exhibit and parts of the theatre display from the seminal 1930 Section allemande in Paris.