It's not the eye of the needle that changed - The Self. The artist presents a large-scale installation including elements of sculpture, banner and collage. An invitation for the resolution of multiple forms of conflict. 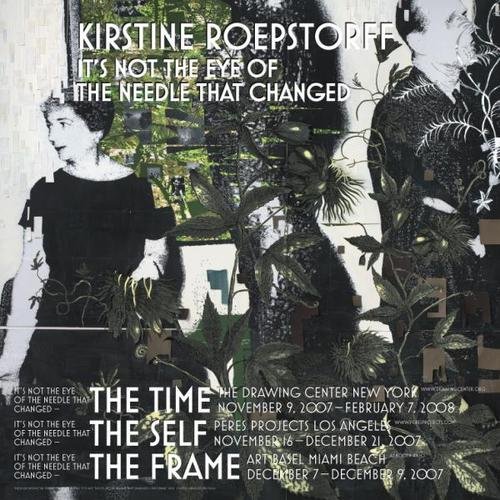 Kirstine Roepstorff is a human prism. She knows that we know this much about her:

(1) She is from Denmark, working mostly in Berlin, Germany, creating works of art and publishing artist's books with trickster-esque English titles such as "Who Decides Who Decides." (Revolver, 2004)
(2) She uses the language of collage to produce sculptures and wall works.
(3) Her collages are produced in the semi-consistent form of a pure fragmentation: fragmented because their components have been spectra-sized by the human prism, usually with scissors and an adhesive agent, and pure because she succeeds in removing all but the most transparent layers of Lacanian ink.
(4) She informs her collage production with a politicized cosmology, incorporating at once the most esoteric and relevant social concerns.
(5) Her politicized cosmology is informed by an unconventional wisdom that collapses the hyper-feminine into a space as small as the sleeping cabin of a tractor-trailer in the parking lot of a truck stop deep in the American South.
(6) She would prefer to go to the cathouse next to the truck stop, if we agreed to wake up and join her there.

As the title suggests, "It's not the eye of the needle that changed: The Self" offers the most intimate installment from the artist's ongoing three-part exhibition. It is an exercise in reflection, and an invitation for the resolution of multiple forms of conflict, not limited to the aesthetic, geometric, perceptive, external, internal, platonic and corporeal. Despite the abundance of motifs (pagan, mirror, language, monolith, and others) that remind us of the timelessness--and the futility-- of our innate compulsion to bring absolute resolution to even the least complex of these issues, Roepstorff circumnavigates any vantage of pessimism or optimism. One lives with or leaves these works with a palpable longing for closure, knowing the feeling is probably the same as the artist's. After all, she knows she does not know.

Kirstine Roepstorff (b. 1972, Denmark) lives and works in Berlin and will be present for the opening.

Her work will be featured in the forthcoming exhibitions "The Triumph of Painting: Germania," Saatchi Gallery, London and "Fit to Print,” Gagosian Gallery, New York. She has been in the recent exhibitions "The Subject of the West: Between Two Deaths," ZKM, Karlsruhe, Germany, the Prague Biennale 3, Prague, Czech Republic, "Ortsbegehung 12 -- Reality in general is almost unavoidable," Kunstverein Gottingen, Germany, curated by Bernd Milla "Fantastic Politics," Museum of Contemporary Art at the National Museum, Oslo, Norway, and "Panic Room" works from the Dakis Joannou Collection, Deste Foundation Centre For Contemporary Art, Athens, Greece. "It's not the eye of the needle that changed -The Self" will be on view at Peres Projects (969 Chung King Road, Los Angeles) through Dec. 21, 2007. Hours: Tuesday through Saturday, from 11:00 A.M. to 6:00 P.M and by appointment.