More Light, More Power, More People. Fusion Now! asks what art and society might look like if we thought positively about a world based on more energy, not less. The work of artists who explore the widest meaning of energy in art and politics, from radically divergent standpoints. Featuring Liam Gillick, John Russell, Roger Hiorns and many more. 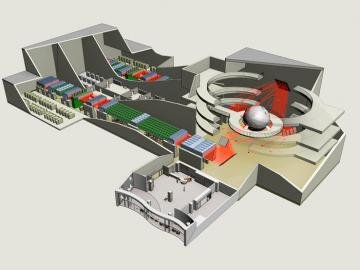 curated by JJ Charlesworth for ROKEBY, in association with The Manifesto Club

At a time when we are told that our excessive use of fossil fuels threatens the environment itself, environmentalism advocates that the only solution is restraint and reduction. FUSION NOW! asks what art and society might look like if we thought positively about a world based on more energy, not less.

Bringing together artists, social and scientific commentators, FUSION NOW! takes as its starting point the rapidly developing science of nuclear fusion. As a revolutionary science that heralds an unprecedented advance in society’s access to energy, nuclear fusion can provide energy that is abundant, potentially unlimited and clean. A big solution to a pressing problem, fusion is however strangely absent from a public discussion that seems more comfortable with self-imposed limits and a pessimistic approach to how society might meet the challenges it faces.

Instead of asking artists to respond directly to the politics of energy, or to illustrate the issue in a didactic way, FUSION NOW! presents the work of artists who explore the widest meaning of energy in art and politics, from radically divergent standpoints. Energy is present as a symbolic or cosmological dimension, as in the work of Roger Hiorns and the late John Latham; it appears as an aesthetic force, in the work of John Russell and in the paintings of Andrew Rucklidge. Elsewhere, the politics of energy and their relationship to the legacies of Utopian modernism are addressed in work by Mark Titchner, Sam Basu and Alasdair Duncan; and the contemporary political dimensions of energy, as a key issue in how wealth, work and social division operate, are addressed in contributions by Liam Gillick and the artists’ group Freee, while WITH and Laura Oldfield Ford present satirical and politicized responses to the orthodoxies of green pessimism.

FUSION NOW! will be accompanied by a publication with writing by Prof. Mike Dunne, director of the new EU-funded laser fusion project HiPER, political writer James Heartfield, and technology writers Joe Kaplinsky & James Woudhuysen, with an introduction by JJ Charlesworth.