"Urban Journey" by Albert Irvin reflects Irvin's belief that starting a new painting is like going for a walk without knowing where you are going. "Downstairs Review" brings together a selection of wall based and sculptural work. 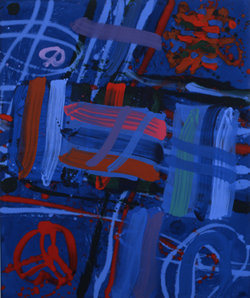 "Bold in colour, fast and light in spirit" is how Financial Times critic Michael Glover has described Albert Irvin's painting. Gimpel Fils is delighted to announce an exhibition of new paintings by Irvin, who continues to find energy and inspiration from the act of painting. Irvin's conversion to abstraction occurred in the mid-1950s, and since then he has been exploring the possibility that paint can conjure up profound feelings: he believes that like music, art can and does, mean and narrate "everything".

Urban Journey reflects Irvin's belief that starting a new painting is like going for a walk without knowing where you are going. Anything could happen. Having lived and worked in London his whole life, Irvin's paintings embody not only the spirit and vibrancy of the city, but also its history. Brushstrokes create their own architecture, and in this latest body of work Irvin introduces us to new motifs including a curved bell shape. It is a testament to Irvin's continued commitment to exploring the possibilities of paint that overlooked details of the city can provide fresh and exciting components for his visual language.

Gimpel Fils is particularly pleased to be hosting this exhibition, which marks the 25th anniversary of Irvin's first show at the gallery. Since William Packer lamented that "Albert Irvin...is under-shown and under-valued in this country", in 1978, Irvin has become one of the country's most admired artists. To celebrate his achievements, a catalogue with a new essay by Paul Moorhouse will accompany the exhibition.

Born in London in 1922, Albert Irvin attended Northampton School of Art from 1940-1941, when he began his service in the Royal Air Force. In 1946 he resumed his studies at Goldsmiths, where he subsequently became a tutor. In 1982 Gimpel Fils held its first solo exhibition of his work, and we have exhibited his work regularly ever since. The Serpentine Gallery held a major retrospective of his work in 1990, and Irvin was elected a Royal Academician in 1998, and an honorary member of the Royal West of England Academy in 1999. His work was most recently seen in the Royal Academy Summer Exhibition.

In November 2004 Gimpel Fils held the inaugural exhibition of its new contemporary art project space at 30 Davies Street. Downstairs provides a dedicated exhibition space for emerging artists and hosts one-off projects by established artists. This exhibition casts an eye over the seventeen exhibitions held Downstairs and brings together a selection of wall based and sculptural work. Reviewing the Downstairs exhibition programme enables us to take a second look at the work of some of the artists who have exhibited, and find new links and associations between them.

Gedi Sibony's exhibition Some Places Exist was held in September 2005. His work springs from a desire to create more space between and around things rather than create sculptural works that fill space. Questioning the nature and form of contemporary sculpture and the environments in which it is seen, Sibony's work initially appears ephemeral and tentative but is surprisingly evocative.

Working from eighteenth century paintings by George Stubbs and JMW Turner amongst others, Michelle Dovey gives the spaces and details often overlooked in art a prominent position. Bringing the background into the foreground, Michelle Dovey's paintings are infused with excitement over how a detail, or an innocent backdrop, might become the fulcrum of an image. Dovey is successful in redirecting our attention to the unnoticed.

In looking for the perfect vista, Hannah Brown identifies key components of a classic landscape image: fields, hills, trees, hedgerows. The painted surfaces of Hannah Brown's work, combined with sculptural objects, point to the human construction of our environments. Her work highlights the historic division between town and country that has enabled a situation in which the truth of the landscape is jettisoned for a romantic version of it.

Doug Fishbone recycles the language of the mass media in order to critique some of the more unseemly aspects of life in the modern age. Appropriating photographic and digital imagery from the internet, he constructs witty and occasionally shocking film narratives from apparently unrelated material, questioning the way the mind processes controversial visual images and concepts. His work exhibited Downstairs in October 2006, demonstrated a particular interest in the operation of jokes as commodified pieces of language and thought.

Belfast seems a familiar city: images of it have been in over-circulation during the 'troubles'. John Duncan has been making photographic work in Belfast over the last decade as the city has been affected by the Peace Process, the ceasefires, the influx of capital investment and as it has slipped off the front pages. His images depict Belfast as it is dragged into the contemporary world, while remaining conscious of it as a place that resists standardisation and normalisation.

Jock Mooney's hand crafted small-scale sculptural objects exhibited in February 2007 have been discussed in terms of the carnavalesque: folly, excess and the mocking of established norms and codes of behaviour. Challenging the distinctions between high, low and popular forms of visual material, Mooney works as a satirist, commenting on the folly of contemporary society. He utilises humour as a subversive tool that can be understood as defying a world of gloss and sheen.

The Downstairs programme demonstrates Gimpel Fils' commitment to contemporary art and we are proud to announce that 2008 will see the project space continue to support emerging artists. Forthcoming exhibitions include paintings by recent graduate Arabella Hope, sound installation by Clare Gasson, etched photographs by Lee Edwards and photographic investigations into parapsychology by Susan Macwilliam.