The Lentos-Collection from artists' points of view 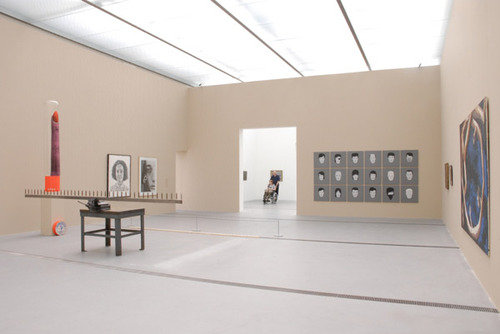 2007 marks the 60th anniversary of the first exhibition of the Gurlitt Collection in Linz, which was to become the New Gallery of the City of Linz - Wolfgang Gurlitt Museum and finally the Lentos Art Museum Linz. This is an occasion to develop a completely new hanging of the holdings to present to the public in the second half of the year.

Which works of art history seem especially relevant today and why? How does an artwork accrue attention, significance, affection - in which context and from whom? Glimpses into art history can be searching movements. They can trace out possible answers to specific questions, follow personal paths of thought, pursue long-term passions or spontaneous impulses - and suddenly veer off at any time.

A museum that understands art as a medium of confrontation with contemporary worlds and conditions of life cannot be content with conveying art history as an educational canon and factual knowledge. It must create impulses for its visitors to develop individual approaches to works, which are not burdened by prescribed valuations and representations of history: idiosyncratic and self-determined. Lentos has invited contemporary artists to comb through the museum's holdings following their own interests and passions, and then to develop an arrangement for one room of the collection gallery. The only specification is that each room is to contain one or more works by the respective artist or artists from the Lentos holdings.

Starting from the artists' own works, thematic and formal connections to works from the museum's holdings are drawn by the painter and filmmaker from Linz, Dietmar Brehm, the Hamburg based photo artist Bernhard Prinz, the Vienna based artists working with intermedia, Lois Renner, Eva Schlegel, and Lois and Franziska Weinberger. The results are dense arrangements of space, in which elements of color, text or installation play significant roles alongside the selected artworks: Gustav Klimt greets Gottfried Helnwein, photographs from the classical avant-garde meet present day paintings, a Californian drawing of today corresponds unexpectedly harmoniously with one from Vienna of the post-war period. The art historical, canonical valuation as "masterpiece" or as a less appreciated work is suspended; some works that have long been unseen were rediscovered in the depot.
This very personal selection of works is purposely juxtaposed with a room with a classically chronological museum presentation, in which exemplary landscape depictions from the 19th century remain hung.

We want to thank the participating artists most warmly for their work; in light of collection holdings of about 1600 paintings and sculptures, roughly 850 photographic works and several thousand works on paper, this was not unsubstantial. In this way, they have enabled entirely new perspectives not only for the public, but also for us as art scholars in Lentos.

The exhibition centers around a giant billiard ball, a white pneumatic mattress 15 x 15 meters large and one meter high with three inflated balls made of PVC. The mattress can work as a stage, on which the people become actors in the scene. Within the framework of this intervention, the point at that time was to break open the perspective immanent to the museum and to playfully question the status of the recipient at the same time. The museum as a playground? Today, almost forty years later, the expectations of the visitors have changed: in addition to the basic functions of a museum, high quality entertainment has become a standard.

In the 1960s the young architects and artists left their studio with the intention of changing society. With the first moon landing, technical progress seemed boundless. This development led to a sense of setting out for new horizons, loudly attracting attention, evincing a joy in experimentation and an interest in new materials, and resulting in a transregional response from the media.

The group HAUS-RUCKER-CO (authors 1970: LAURIDS, ZAMP, PINTER)* became active in the space of the museum and in public space: it was a time of expanding consciousness and arranging urban space. Prototypes for new ideas for living were created, influenced by new building materials, and proposals for redesigning people's living space.

The exhibition of the architect-artist group is expanded with objects and graphic works from the Lentos Collection and loaned works from the Museum of Modern Art Ludwig Foundation Vienna, the artists' archives, private archives, and others.

Original films and literature from the Lentos Library about the artists and their context round out the show.

A catalogue is published for the exhibition, which is availalbe in the Lentos Shop for EUR 18,-.

Until 17.2.2008
Ursula Mayer Zeitkristalle / The Crystals of Time

The exhibition The Crystals of Time offers a concentrated insight into Ursula Mayer's current film work. Mayer's most recent film The Crystal Gaze (2007) is presented here for the first time. The trilogy Portland Place 33, Keeling House and Villa Mairea (2005/06) can be seen in a thematic conjunction with this most recent work.

In the three short works of the trilogy Ursula Mayer exhibits the basic elements of the filmic: the setting, the protagonist, the camera movement. The selected locations are charged with historical, social and ideological facts and references: a Victorian townhouse, a residential tower in London from the 1950s, a modernist private villa in Finland. Complex interactions evolve here between a woman, the spaces and the camera. No stringent narrative results from the fragmented actions, yet the viewers are drawn into a fascinating network of fictions, looks, gestures, forms and the suggestive soundtrack in an ellipsis of time.
In The Crystal Gaze, shot in the art deco rooms of Eltham Palace in London, Mayer works with a script for the first time. Narrative and visual parallels are drawn to the tradition of the classical Hollywood film, and a cinematic role play of power relations between actresses is mirrored and framed by the opulent elegance of the historical setting.

Ursula Mayer, born 1970 in Upper Austria. Studied at the Academy of Fine Arts in Vienna, at the Royal College of Art and at Goldsmith College in London. International exhibitions since 1996. Lives and works in London.

For their generous support for the realization of The Crystal Gaze the artist thanks Giorgio Fasol, Valentino Barbierato and Gallery Monitor, Rome.

from 6:00 pm: invitation to view the newly arranged rooms
from 7:00 pm: Opening: Stella Rollig, Director
Video Statements by the Artists produced by xxkunstkabel
Lecture: Prof. Dr. Rainer Metzger, Professor of Art History at the Art Academy Karlsruhe, "Cabinets of Admiration. About art, how it comes into the museum."
Celebration in the Auditorium with music by Electronic Candy