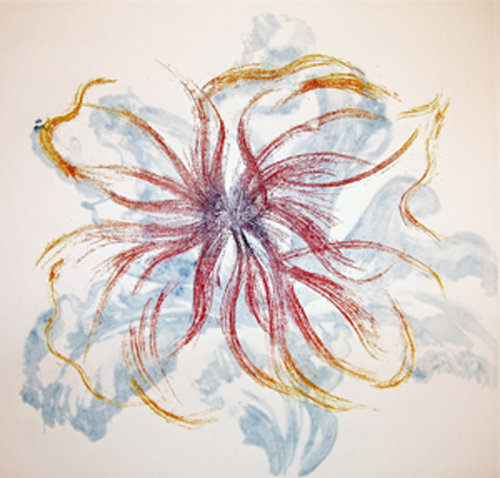 Paul Sharpe Projects presents “Lenore RS Lim: Evocations” on view at 547 West 27th Street, Fifth Floor, from 27 November 2007 through 5 January 2008. A reception with the artist will be held Thursday, November 29th, from 6 to 8 PM.

Lim, a Filipino printmaker who resides in New York and Manila, will present a new body of work based on flower blossoms. Using spitbite, intaglio, and Chine Colle, she manipulates four plates to explore the diversity of expression found in a limited imagematic range. All of the prints utilize a combination of the same plates. The floral motif is akin to a Magnolia blossom or orchid or open tulip. The first, is a soft abstraction of the fully open flower; plates two and three draw from more abstract notions of the yet to fully open bloom; and the fourth plate incorporates the words peace, love, and eternity written in Filipino.

The images were pulled at the Robert Blackburn Printmaking Workshop at the Elizabeth Foundation for the Arts. The images are on white BFK Reeves paper. The works in the series generally are in an edition of three with several Color Test Proofs on smaller sheets. The image size for all of the works is 12 x 12 inches and the sheet size for the edition is 22.5 x 30 inches.

The suite of prints, all produced in 2007, will be featured with a larger body of work at the Metropolitan Museum Manila in a solo exhibition of the artist’s works in February 2008.

Lim, who is highly regarded in the Philippines having received a Presidential Medal of Honor (specifically, the Pamana ng Pilipino Award, for Filipino Overseas) for her accomplishments in the arts, enjoys a growing audience of collectors in the United States. Her work is included in the U.S. Library of Congress and the private collection of Agnes Gund. Ms. Gund penned the forward to her monograph Profound Afterglow: The Prints of Lenore RS Lim, published by Reyes Publishing in 2005. She has shown exclusively with Paul Sharpe Contemporary Art since 2002.