The motivation to curate an exhibition on the subject of Art and Politics results from the recently perceivable change from the so called retreat into privacy to the formation of little circles of attitudes. The scientific analyis of historic, cultural and political motifs also serves the invited international young artists to develope statements, reviews or projections of utopia. 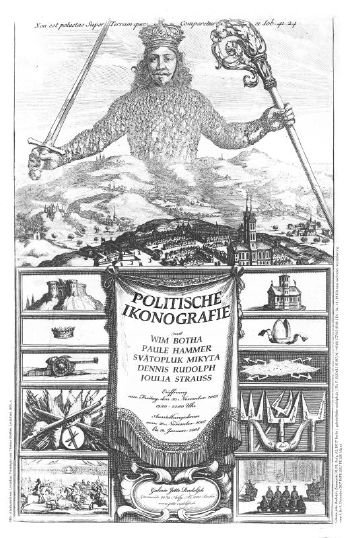 Political Iconography means the scientific investigation of political images. The homonymous tutorial for Art History at the University Hamburg as well as well-known scientists e.g. Aby Warburg, Martin Warnke, Horst Bredekamp and Michael Diers analyze the history of illustrating governance and the theory of states, gestures of messages in the era of media, based on the tools of chromatics, composition and the rhetoric of the image.

The motivation to curate an exhibition on the subject of Art and Politics results from the recently perceivable change from the so called “retreat into privacy” to the formation of little circles of attitudes. The scientific analyis of historic, cultural and political motifs also serves the invited international young artists to develope statements, reviews or projections of utopia. Comparable to the transdisciplinary sciences the arts are dealing with the visual strategy of combining history and topicality, the oscillation between the different media and genres.

The South African artist Wim Botha (* in 1974, Pretoria) builds up fascinating installations of sculpture and prints, reflecting the motive of mortality through the visualization of power and religion, in order to redetermine the for hundreds of years effective ideology concerning the attitude for life and death. Referring to baroque stylistic elements Botha’s threads on the subject of life are set into the context of here and there, modernity and history, the momentariness of the individual contra the symbols of power.

Some of the works of the Leipzig based artist Paule Hammer (* 1975, Leipzig) carry a nearly provocative tenor. He contrasts in an nonorthodox mixture the word to the picture, the meticulousness against gesture, quotation against irony, to create a world concept demonstrating the “conflict of the artist against himself, of the art against reality as well as against the reality of arts” (Maik Schlüter). In the show Hammer presents personal as well as political engaged of “connections”, in medium of painting and collage on paper. Obviously there is a network of odd lines adapting the social structures of the artist. Points=Persons and Lines=connections assemble into a family tree alike construction within its traces the recipient can attempt his own reconstructions.

The heraldic and iconografic diskussion is significant for the work of Dennis Rudolph (* 1979, Berlin). Based on the antiquated media of art and propaganda the artist works with etchings and painting to express his mission of a new religion of art. His adaption of C. D. Friedrichs “Ice sea” in the middle of painting is shadowded by a dark whirl of clouds which itself is penetrated by a by a hopefully glow of illumination. This scene is foiled by spiked steel helmet visible in the foreground of the painting to provoke the democratic- liberal attitude of the recepiecent.

Svätopluk Mikyta (* 1973, Cadca) has chosen the motif of mass movement as a subject of his work. Referring to socialist roots the artist deals with oversubscription of book prints with the picture of the Spartakiad as an socialist answer on the Olympic Games as well as an example for geometric formations. Within these formations the individual is subsumed under the crowd. Mikyta uses the medium of subscription as an expression of the political manipulation of images, but besides because of its psychological quality.

It is the Russian artist Joulia Strauss (*1974 in Leningrad) trying to set a direct link to the current politics through her figurative sculpture casted in brick. Using the operational connection of art and science as well as neoacademic stilistic elements Strauss stages two women on a pedestal with their arms raised to a salutation. Simoultanously with the other hands they present a bowl. The (tea)bowl refers to polonium, an chemical element which became famous in November 2006 when the Russian secret agent Litwinenko died by an overdose. It is still open if this happened as a political attack. For this reason the sculpture oscillates between the character of being a memorial or an advertizing media.