An exhibition of work from the Irish Museum of Modern Art's Collection based on the depiction of nature in art and includes works by artists such as Hamish Fulton, Marie-Jo Lafontaine, Alice Maher, Barrie Cooke, Oliver Comerford and Avis Newman. 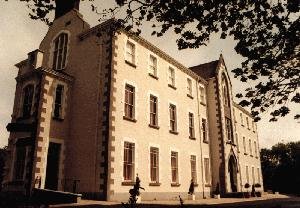 An exhibition of work from the Irish Museum of Modern Art's Collection has opened to the public at the Cavan County Museum in partnership with the IMMA National Programme. Alternative Nature is based on the depiction of nature in art and includes works by artists such as Hamish Fulton, Marie-Jo Lafontaine, Alice Maher, Barrie Cooke, Oliver Comerford and Avis Newman.

Tipperary-born Alice Maher works within the realms of nature and culture, subversion and transformation, mythology and memory. Working with materials like bees, berries and hair she builds up a strong relationship with their histories and cultural associations in the creation of surreal works that appear like enchanted objects from a medieval folk tale. Maher's lack of conformity to a single medium and wide use of natural materials are typified in Berry Dress, 1994, which presents the delicate shape of a child's dress, decorated with berries. On closer inspection, the dress loses its innocence, taking on a more sinister appeal. The pins, which hold the berries in place, are arranged internally: should the dress be worn, these pins would pierce the skin.

Nests There Are..., 1986-7, by Avis Newman presents a complex combination of natural objects (bird's feathers and honeycomb), industrial material (steel) and painting and refers at once, to nature, craft, and to art. It also focuses on the intangibility of the imagination, as real objects fuse with the artist's drawn image and symbols of freedom and nature are tightly contained in its glazed and boxed frame.

Also included in the exhibition is the film-work Waves, 1998, by Marie-Jo Lafontaine. One of the most prominent figures in contemporary European art, a number of Lafontaine's monumental film installations deal with passion and violence. In Waves, shot on the west coast of Ireland, Lafontaine shows the theatre of the elements in fury, the power and passion of the natural world. The viewer is drawn into the work through Lafontaine's use of sound that alternates between dramatic pieces of classical music which the artist distorts post-production, and mysterious otherworldly voices. The crescendos of the powerful and dramatic work echo the tumultuous movements of the breaking waves leaving the viewer with a sense of the incommensurable mystery and power of the ocean.

Alternative Nature is curated by Johanne Mullan, National Programmer, IMMA. The National Programme is designed to create access opportunities to the visual arts in a variety of situations and locations in Ireland. Using the Collection of the Irish Museum of Modern Art and exhibitions generated by the Museum, the programme facilitates the creation of exhibitions and other projects for display in a range of locations around the country.

Alternative Nature continues at the Cavan County Museum until 13 January 2008.