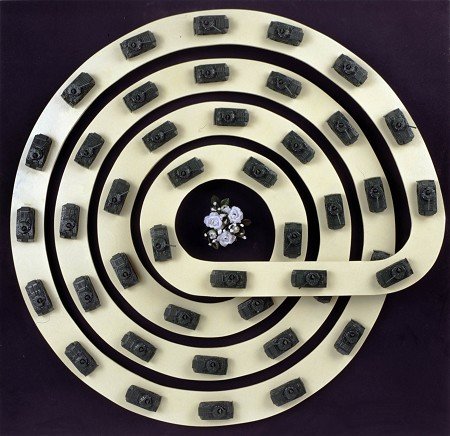 Rusty Scruby's works are literally woven. Pieces of paper, plastic or any other material that interest him are woven into each other until it forms an image. Based on his background as an engineer he creates his own formulas to calculate the amount of materials he needs for each piece. From that point he works until the image is 'composed' by several other pieces of the same image in a sort of logical puzzle. His obsessive approach to art and his meticulous system allows him to create monumental pieces with the same procedure as the smaller ones.

Kazuya Sakai was a true Renaissance man, he was a musician, a writer, a translator, an educator and a painter. Most of his art work pertains to the abstract geometric movement, of which he was an important part in Latin America in the '80s. In the late '80s and beginning of the '90s he experimented with computer generated art. His work can be found at the Museum of Modern Art in New York, the Bibliotheque National in Paris, the Museum of Modern Art in Mexico, and at the Jack S. Blanton Museum of Art at the University of Texas at Austin among others.
Leon Ferrari recently participated in the Venice Bienal and Documenta in Europe and the Bienal de Sao Paolo in Brazil shortly after a large retrospective exhibition at the Recoleta Cultural Center in Buenos Aires. Ferrari has been actively producing since the early 60's and his work is two fold, either lyrical drawings and paintings, or controversial installations criticizing the lack of separation of Church and State and the resulting war and violence.

Joe Ramiro Garcia paintings deal with memories from his childhood. Some of the images are made from mementos of this stage in his life. He is confronting the past, with melancholia and humor. He treats good memories and traumas equally, mixing all these feelings and placing them in his works. Elements from cartoons and other icons of his generation are placed in his work, creating a context.

Project Room: In the project room we will display mobile pieces by Daniel Joglar. Daniel assembles his modular pieces using vibrant colors in a playful mood. He uses everyday materials, part of toys, etc, which he combines in artful mobiles. He is a young and up-coming Argentinean artist whose work has been exhibited in Argentina and in the States. In 2006 his piece "The Invisible Jump" inaugurated the Workspace in the new Blanton Museum building at the University of Texas in Austin.