The Circus Comes to Town

A free exhibition featuring circus-themed work by 17 contemporary artists who talk about the arrival of the circus train with its gaily decorated box cars, followed by the wonderful parade of the animals through downtown streets to the spectacular big tent. 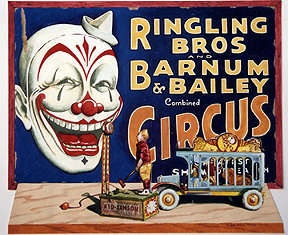 What is more magical than the circus? That same excitement and wonder will fill the Palos Verdes Art Center with The Circus Comes to Town, a free exhibition featuring circus-themed work by 17 contemporary artists. The magic, wonder and excitement will be at its greatest at the free opening reception from 5 – 8 p.m. Friday, December 7, when the artists will be honored and surprise circus activities are planned.

Recall your childhood excitement when you learned the circus was coming to town: the arrival of the circus train with its gaily decorated box cars, followed by the wonderful parade of the animals through downtown streets to the spectacular big tent. Then the big day itself: the roar of the lions and tigers, the death-defying stunts of the trapeze artists and acrobats, the noise of the crowd, the antics of the clowns, the smell of the elephants, the taste of the buttery popcorn!

As participating artist Carolyn Fernandez said: “The circus was the perfect gift of comedy, drama and action….I hope that I share that same element of surprise, delight and suspense that captivated me as a kid.”

Yet there’s a dark side to the circus, said Exhibitions Director Scott Canty, curator. “It’s the haunting, somewhat scary, side behind the bright lights, shining costumes and upbeat music. It’s the sad clown, alone at night in his tiny trailer.”

“This work is an unflinching look at the merry but lonely life of the buffoon,” said Tom Miller of his series of paintings exploring the “magical, shape-shifting qualities” of the clown. “Under layers of makeup roll the tears of thousands of years of human folly.” The dual nature of the clown (“to amuse and, more often than not, to horrify”) is also the topic of Jorg Dubin’s paintings.

The circus and its performers comprise a small city with all its ups and downs, “the universal human moments that make up their daily lives,” explained photographer Meg Escude, who has chronicled the everyday life of the Italian-Brazilian Circo Orlando Orfei, one of Latin America’s oldest traditional circuses, and the 100 people traveling with it.