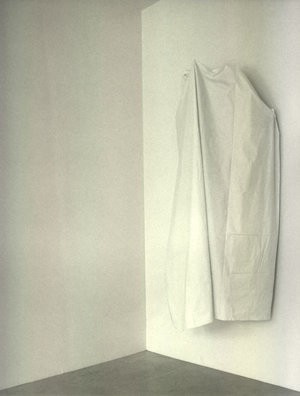 Chacun à son gout presents a selection of contemporary Basque artists who have all produced new projects in an exhibition specially conceived for the Guggenheim Bilbao Museum’s tenth anniversary. Taken from Diderot, the title of the exhibition champions individual taste and freedom of choice. As a phenomenon relative toperception and time, taste may evolve according to social and individual preferences, and is influenced by class, gender, geopolitics, and aesthetic education. Every new artwork, every new exercise in interpretation contributes new perspectives to the public’s reservoir of tastes and values. The twelve selected artists are part of a generation established in the late nineties using international art languages to respond to the complexities of their local milieu.

Horizons is a series of bright pennants by Ibon Aranberri that zigzag from the roof of the museum, recycling and modifying Chillida’s graphic and sculptural legacy. In an ironic linguistic operation, cultural and political icons and anagrams are reconfigured to playfully demystify symbolism and memory.

In his latest film, Disarmingly Cute Manu Arregui explores the physical and psychological transformation of Vanesa Jiménez, known as “the glass girl” due to a degenerative illness, to question the concept of hyper-reality and the ethics of TV reporting.

Clemente Bernad uses photography as a social document in series that are either commissioned by newspapers or the result of his own inspiration, such as Day Laborers, Basque Chronicles, and Open Tombs a report on extreme left-wing Turkish prisoners.

Abigail Lazkoz’s black-and-white drawings double as a kind of restrained, synthetic writing in 130,000 Years of Last Tendencies, a large mural work that alludes to the art industry’s obsession with fashion and novelty, while recalling burial rites as a form of anthropological culture.

Maider López returns to the concept of spatial geometry to work an ironic, chameleonic transformation on one of the museum’s more classically designed galleries. By turning it into a “Frank Gehry gallery”, the artist borrows the architect’s signature style to question notions of authorship.

In Nom de guerre, Asier Mendizabal takes an apparent ready-made from an incident of street violence: a can that burns away on a concrete block like an urban joss-stick holder. In the limpid context of the museum building, the flames act as a sign of social angst, questioning both notions of control and the commemorative function of sculpture.

Sentences like Have You Given in to Your Desire to Master? are inscribed on placards by Juan Pérez Agirregoikoa to signify social urges and political violence. Some of them are to be found in Project Turned into Installation, fixed to a sports hurdle.

With Irrintzi, an action shot on video, Itziar Okariz moves around the museum emitting irrintzis, an ancestral Basque shout. This tour in sound apprehends the space semantically in a play of contrasts between remote signifiers, such as the traditional connotations of the irrintzi and the spectacular modernity of the Guggenheim Bilbao.

Aitor Ortiz’s Y combines a series of photographic panels with a real opening in one wall of the museum. The work explores our phenomenological perception of architecture and the lines between reality, sculpture and photographic representation.

The concept of sculpture as intervention rather than merely object has led Sergio Prego to install Sequence of Dihedrals in the courtain walls of the museum Atrium. Although the title appears to be a simple allusion to geometrical abstraction, the work is in fact a conceptual challenge to the actual function of art in a museum.

Ixone Sádaba explores issues of identity by splitting her own image, organizing theatrical dance routines in sublime, apocalyptic landscapes. Poétique de la disparition and Leviathan are two photo series in which intimate or atmospheric turbulence becomes a metaphor for a tragic, contemporary dysfunction.