Calling the elephant. It is an exhibition in which individual works might reveal something of each other, where characters are shadowed by caricatures, and through which the gallery transforms into both a stage and a screen. Curated by Tessa Giblin. 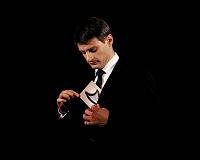 In Aurélien Froment's film Théâtre de Poche, a magician like the forgotten Human Card Index - Arthur Lloyd, who could produce almost any kind of printed item from one of his pockets on request, conjures images into the air telling a cyclical tale. The sequences being performed have something of the quality of a child's film - there's a rabbit and a hat and a turtledove-duck - but one in which the innocently clear images belie the careful navigation of its own construction. Set within the gallery, the new film is one of the characters in a cast of odd bed-fellows. The Jack of Hearts and the Jack of Spades turn on their heel and disappear into the blackness, while a Prompter searches through his things for a magazine with forgotten images. Théâtre de Poche, Volume 1 - the first publication in a series of new interview scripts - introduces us to an architect, a retoucher and a puzzle maker, continuing the exploration of Théâtre de Poche the film. One after another, they sustain an ongoing vaudevillian conversation.

It is an exhibition in which individual works might reveal something of each other, where characters are shadowed by caricatures, and through which the gallery transforms into both a stage and a screen.

Prompter (softly) - Hey!
Aurélien - Hey?
Prompter (softly) - You talking to me?
Aurélien - You talking to me?
Prompter (softly) - What's that supposed to mean?
Aurélien - What's that supposed to mean?
Prompter (softly) - Say, stop repeating everything I say.
Aurélien (muttering) - Say, stop repeating everything I say!
Jack of Spades and Jack of Hearts (in unison) - If you please, Aurélien. …He's not repeating everything you say, you're the one responding to his prompts. You only say what he wants you to say.
Prompter (muttering) - They're right, those knaves. I've got a script to follow, it's my job. I'm afraid that's just the way it is.
Aurélien - A script to follow? Ok, I think I understand, I didn't mean to ruffle you. Have you been in there a long time?
Prompter - Of course. I live here. Seen from above, it may not look like much, but down here it's pretty roomy. You should come have a look. What's more, I have everything I need here. All my books. What's more, I've got my tape recorder.
Aurélien - Tape recorder?
Prompter - That's right. One day I completely lost my voice, and I realized I could use a tape recorder as an understudy - an understudy for a prompter, just think of it! I also use it during the plays, to record myself when I prompt and now I have a great collection of complete blanks of memory. Everyone has their own way of passing the time.
(Excerpt from Théâtre de Poche, Volume 1)

Aurélien Froment has recently shown in Twice Told Tales, Galerie Michel Rein, Paris 2007, In the Stream of Life, Betonsalon, Paris 2007, A Hole in the Life, Store, London 2006, Mercury in Retrograde de Appel, Amsterdam in 2006, Of Any Actual Person Living or Dead, with Ryan Gander, Les Laboratoires d'Aubervilliers, 2005 and continues to work and show with Store Gallery, London.