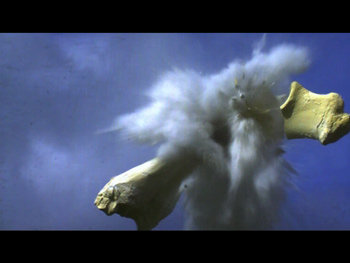 Since the Carnation Revolution in 1974 which marked the end of an authoritarian regime that had been in place for more than forty years, artistic creation in Portugal has not ceased to evolve and accelerate. If migration was an essential condition to exist for the outstanding figures of the art scene of the 60s and 70s, things started to change in the 80s. Those years saw the emergence of tutelary figures who managed to break into the international scene without having to become exiles. Today, this reality continues to be stated through the singular identity of artists capable of constantly reinventing their own models. The necessity of settling elsewhere to exist has mutated into an active participation in contemporary debate, and if, henceforth, certain artists live in London, Berlin or Paris, they are no longer exiles but are integrated into a global artistic community.

The exhibition PORTUGAL AGORA -- À propos des lieux d’origine provides an outside view of the contemporary scene of a country. The Portuguese community represents a significant proportion of the population of Luxembourg and greatly contributes to the dynamism of the Grand Duchy. However, it remains culturally under-represented and its contemporary production is too often ignored. Consequently, the creation of PORTUGAL AGORA seemed to be an obvious step as the quality, dynamism and diversity of current artistic production deserves more exposure. The guiding principle of this project, that brings together 38 artists, is about meeting, exchanging and the idea of opening. The exhibition offers a voyage through the work of artists from different generations and hailing from a variety of horizons. It proposes a succession of views that are critical, inspired, difficult or out of step but which are always pertinent and conscious of the issues that drive the contemporary world.

A catalogue created by Marco Godinho, a Portuguese artist who lives and works in Luxembourg, is being published for the exhibition. In this publication, conceived as a sketchbook, Godinho poses questions concerning place and origin, delocalisation and ties and establishes a cartography of artists participating in Portugal Agora. The book also includes texts by Natxo Checa, Oscar Faria, João Fernandes.

With the support of Fondation Calouste Gulbenkian, TAP PORTUGAL and Instituto Camões Portugal. Mudam thanks all the donors and sponsors, and particularly the Banque de Luxembourg, the Leir Foundation, Inc., KBL European Private Bankers and Cargolux for their generosity.