The gallery presents three show: CriKCity & The Walls That Scour Us, an exhibition of watercolors and intricate wall drawings by Santiago Cucullu divided in two parts, and a group exhibition with works by Tauba Auerbach, Daniel Buren, Sol LeWitt, Mike Quinn, and Robin Rhode. 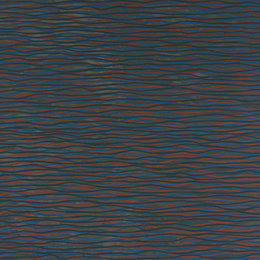 Successive approximation: n. A method for estimating the value of an unknown quantity by repeated comparison to a sequence of known quantities. (The American Heritage Dictionary)

Perry Rubenstein Gallery is pleased to present Successive Approximation, a group exhibition of multi media works by five artists in various stages of their careers. Whether intentional or not, the problem-solving or computational method where a succession of approximations is used to achieve a desired degree of accuracy is an integral factor in each of the included works.

Auerbach riffs on the popular children's game of telephone; in her video a word or phrase is whispered from person to person around a circle and then announced after one rotation. This exchange of information morphs language so much that ultimately the meaning is altered completely. Mike Quinn presents a series of collages that combinesports pennants with sections of the New York Times' coverage of March Madness laced with remnants of the drugs that mark the artist's celebration or ritual of watching each game. Quinn develops a visual system of mapping out the irrational behaviors and emotions that come with escape and addiction that is as haunting as it is beautiful.

The mathematical method of successive approximation becomes not only a conceptual factor but also a literal one. Each line or stroke or cut-out is followed by a second, and the second by a third, and a third by a fourth until the "desired" result is formed, until the unknown becomes known, until the work reveals itself. Parts are lined up/ layered until and in order for there to be a whole. The process also becomes a theory of context: each of the artists is a figure or "quantity" with his or her own unique and respective language; but, when presented together, the impact of that language is heightened.
Concurrently on view at the gallery's 24th Street spaces is CriKCity & The Walls That Scour Us, an exhibition of watercolors and intricate wall drawings by Santiago Cucullu.

Perry Rubenstein Gallery is pleased to present CriKCity & The Walls That Scour Us, an exhibition of watercolors and intricate wall drawings by Santiago Cucullu. This will be Cucullu's second solo exhibition in New York, arranged in two of the gallery's exhibition spaces on 24th Street.

In his new body of work, Cucullu sets aside his knowledge and predisposed notions of urban life to engage in a metaphysical exploration of both metropolitan structures and the detritus found within cityscapes. Through a dramatic experiment with free-association, he collects and fuses together images of streetlights, clock towers, meandering alleyways, brick walls, vehicles and the discarded remnants of rented domesticity into a curious and disorienting network of abstracted forms. Cucullu's execution further infuses these depictions with a dynamic sense of movement through his use of formal ploys such as competing perspectives, shifts in scale, and slips between representation and abstraction. Ultimately, Cucullu illustrates a vision of a peculiar, delirious environment actively in flux.

The discarded furniture items displayed within 'Blood on the Tundra' and 'D.T. CriKCity' are borrowed images from photos taken off the streets of Milwaukee, and further manipulated into monochromatic vinyl wall drawings. An underlying sentiment in these two works are referent to the songs 'Kill City' by Iggy Pop and James Williamson and 'Downtown' by Tony Hatch which comically result in a discordant abstraction echoing his seemingly suspended cityscapes.

A suite of watercolors at 534 West 24th Street addresses a mildly psychotic reaction to living in a city. Some are particular to downtown Milwaukee, specifically in the neighborhood of the third ward. They are paintings of forgotten mistakes, such as broken walls, tossed furniture or public abstract sculptures. The palette is wholly kitsch, with multiple narratives unfolding within a single work.

Santiago Cucullu recently exhibited work in the group exhibition 'Latin American Modernism, the Sequel' at the Museum of Modern Art. He has also recently exhibited works at the Calouste Gulbenkian Foundation, Lisbon, Portugal, and at both the Camden Arts Centre, London and at Le Plateau, Paris. Cucullu is scheduled to create an expansive installation at the Milwaukee Art Museum in April of 2008.