Contemporary Art Project Murcia 2008; curated by Nicolas Bourriaud. The urban reality is currently an open book in which artists can explore the stratum of the past, and the footprints of what is to come. More than 20 international artists propose different layers that make up the present, while others do it by creating a space that redistributes the usual order of time. The show will also features a selection of films and a parallel program of exhibitions by local galleries and institutions. 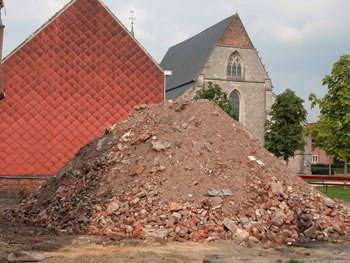 “What if the past played an identical role for us that, in times gone by, the future played for modernists? This was the first question that came to mind when, during my first visit, I was taken aback by the layout of the Arab city, and by the numerous remains of Islamic civilisation surfacing beneath the European present. This historic sedimentation can be made out in the urban fabric, taking the form of an open-air archaeological site, in which the past and the present coexist, and echo one another.

The urban reality of Murcia is the ideal place for carrying out an exhibition about this key problematics in contemporary art: many artists today borrow archaeological methods, excavating in the contemporary world or digging into History, giving their research the same attention to detail that specialists in lost civilisations do.

In this case, archaeology is seen from the point of view of the method, not so much as an area of expertise, and even less as a form of nostalgia: far from extolling the past, these artists survey it, in order to better explain the present. They also apply archaeological techniques to the field of contemporaneity. The arche, the foundation, is unearthed in their work to illuminate us about ourselves. This archaeological research can then be applied to the most distant past, as well as to the most recent events in time, even up to the present moment.

For the modern age, the past represented the tradition only recently replaced by what was new. For the postmodern, it served the purpose of a catalogue, or a repertoire. Today, the past is defined in territorial terms: when we travel, we do it to change temporality; in contrast, examining an art history book refers us to the options chosen by the geography of contemporary styles and techniques. Therefore, the urban reality is currently an open book in which artists can explore the stratum of the past, and the footprints of what is to come.

ESTRATOS’’ poses these questions. Some artists respond to them through the exploration of the different layers that make up the present, while others do it by creating a space that redistributes the usual order of time. As when walking through the streets of Murcia, here we find the complexity of the questions raised by the persistence of memory in a modern time, tired of its flight forward.”

The PAC MURCIA Proyecto de Arte Contemporáneo (Contemporary Art Project) is one of the most ambitious initiatives conceived by the Regional Administration of the Region of Murcia to lay the foundations for a consistent and referential context in the contemporary art field. As well as the exhibition curated by Nicolas Bourriaud, titled ESTRATOS”, it will also feature a selection of films with this same topic in the Filmoteca Regional during the month of February; a parallel program of exhibitions by local galleries and institutions.

With a view to raising interest in PAC MURCIA, a series of activities will be organised to coincide with the event and to attract other artists and players in the contemporary art world to the city.
Conferences and seminars organised in collaboration with CENDEAC, exchanges with the public and local Fine Arts students from Murcia, workshops and guided visits will round off this initiative making it an interactive event that will last for the duration of the project.
More specifically, CENDEAC has programmed for Mondays and Tuesdays from 24th January through 10th March 2008, a seminar titled “Heterocronías: temporalidad e imagen en la contemporaneidad” [Heterochronies – Temporality and Image in Contemporaneity]. Guest speakers at the seminar include Mary Ann Doane, Pamela M. Lee, Peter Osborne, José Luís Molinuelo, Manuel Cruz, Gary Shapiro, Nicolas Bourriaud plus some of the artists in the exhibition.

Seizing the occasion of PAC MURCIA, the Regional Dept for Culture, Youth and Sport has signed a number of agreements with various artists’ residencies in Berlin, London and Rotterdam, for local art practitioners.