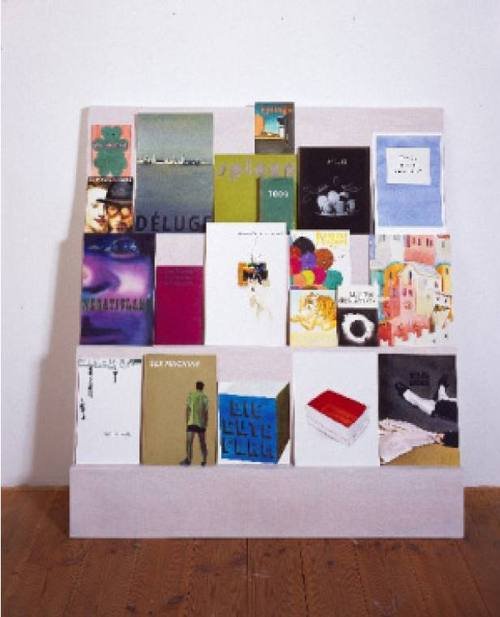 On display is the title of German artist ANNE BERNING’s second solo show at Espacio Minimo. Last summer we had the chance to see her Encyclopeadic Incompleteness at the CAC de Malaga, and now she surprises once again us with her personal vision of art history and, in particular, the history of painting. The Painted Concept was the title given to an enlightening text about ANNE BERNING by Nina Jaenisch, where she analyzes the production, reproduction, and reception of a work of art. Berning’s subject matter is the history of painting, and her relationship with that history. Her position is one of distancing, she does not attempt to imitate, nor aims to create an illusion or an appropriation. Her effort aim towards a documentary representation of her chosen subjects, be they exhibition catalogue covers, or postcards of famous paintings, or a bookshelf of filled with books about painting. This way of painting could be compared to the structuralist process. Sometimes the paintings subject – postcards, book spines, catalogues… – include texts – titles, artist names, artists signatures, …- as an additional explanation to clarify what is being painted.

All the periods of art history are treated in ANNE BERNING’s work, establishing a relationship between different historical, chronological, stylistic or genre categories, creating a subtle, and sometimes ironic play of contrasts and associations. On the other hand, the enlargement of the painted object, the choice of detail, the textual and visual citations, or the use of a strictly rational (alphabetical) order in the placing of the books on the supposed shelf, touches upon the association processes that are activated in the spectator’s memory and upon their perspectives of perception.

ANNE BERNING’s works consider the viewer’s point of view. Book spines against the wall, covers of painting exhibition catalogues on bookcase of spectacular proportions, postcards form paintings in museums or exhibitions, all these serve as model for her works. The paintings are not exhibited in a traditional way and the spectator begins to search for explanations for that. The answer is to be found in the gaze. They are all references towards a false reality which actually does not exist for behind its appearance of reality. What the artist is portraying does not exist. Apart from a few of the objects, most of them are invented. As Joachin Jäger writes in The ABC of Painting. Anne Berning and the History of Art within the catalogue that accompanied the exhibition ain the CAC de Malaga: The sophistication of Anne Berning’s work lies in bravely and impressively mastering the tightrope between fiction and reality. The spines of the books are so well devised and at the same time, so convincing. Whether it is the master Grünewald in old German characters, Mondrian or Memling in distinctive capital letters or a stroke for Ronald B. Kitaj - they are almost always painted in a manner so close to the formation of existing books, that one surely believes themselves to have seen this or that book before.

ANNE BERNING (Werl, Germany 1958) had held individual shows at Kunsthalle in Bremerhaven, at Städtische Galerie Waldkraiburg, at CAC (Center of Contemporary Art) in Málaga, at Kuckei + Kuckei gallery in Berlin, at Grunt Gallery in Vancouver and has participated in distinguished collective shows such as “Io non ho paura del colore” at Villa Piccolomini de Roma, “Aldrei Nie Never” at Living Art Museum in Reykjavik, “Wonkenbilder” at Alte Nationalgalerie in Berlín, “Wie gemalt” at Städtische Galerie Neunkirchen, “Don” at Chianti Fundation in Texas, “Save the day” at the Museum of Modern Art in Frankfurt or “Die Orte der Kunst” at the Sprengel Museum in Hannover. She has also partaken in important art fairs such as ARCO in Madrid, Art Basel Miami Beach, Art Forum Berlín, SHContemporary in Shanghai or CIGE in Beijing.