Gathering is the structural foundation, the physical aspect of the exhibition consisting of a population of ceramic figures that are assembled around a bell tower resembling a prop from a fairytale. 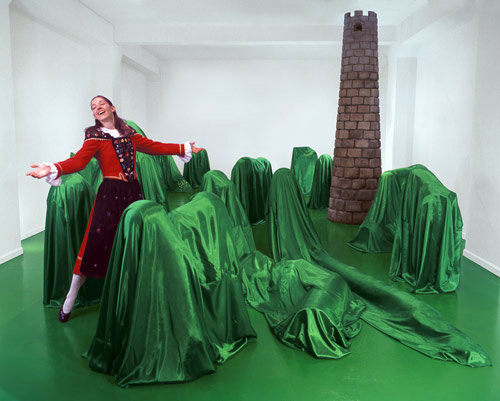 Galerie Nicola von Senger is pleased to present Clarina Bezzola’s first exhibition in Switzerland. The artist, who was born in Zurich in 1970, moved to New York seventeen years ago where she has regularly been exhibiting her work since the late nineties. Bezzola’s exhibitions are, for the most part, elaborate installations that become settings for her performances. Involving mind and body in a very direct way, these performances, which can change and grow over the years, are an essential part of her work. Originating in 2003, Swiss Miss: A Gathering will be shown in Zurich with a new addition to the performance preceding the opening of the show in January 2008.

The title of the exhibition refers to the elements of performance and installation that make up the exhibition. Gathering is the structural foundation, the physical aspect of the exhibition consisting of a population of ceramic figures that are assembled around a bell tower resembling a prop from a fairytale. The characters (with their minimal shape these cylinders with rounded tops resemble both finger puppets and bullet style trash cans) represent a group of villagers that appear to dwell in an idyllic green meadow. A hole in place of a face gives the otherwise identical figures a means of expression through which bizarrely formed organs and body parts that do not suit the unperturbed pastoral scene pour out: Innards, fingers and tongues, textile protrusions sprouting flowers, furry growths and teeth. These surreal characters generate a scene where the bucolic romance of the folktale meets the Kafkaesque semantics of a nightmare.

The dreamlike quality of this scene appears to refer to the psyche, where the incongruence between social expectations and personal comportment can result in a conflict endangering the balance of power in the state of consciousness. The performance, during which the eruptive surfacing of a hidden personality causes the transformation of an innocent, duly costumed Swiss maiden into a writhing, wormlike being, attests to the fragility of this equilibrium. As a result of this metamorphosis, the ceramic figures, which are covered in the beginning of the performance, are unveiled and brought to life. While these figures symbolically express the interior, the Swiss maiden withdraws from social compulsion by crawling into her vermicular costume. Through the acts of concealing and revealing, performance and installation address the question of identity by calling into question the role of social compulsion while the baring of social and personal fears becomes a means of exploring individuality.