Paesler played out painting in a kind of system. A system both in terms of form and context, but nonetheless in a way that contradicts the concept of a system, certainly not producing barren, unemotional surfaces, but rather demonstrating the analytical side to beauty in an optically scintillating manner. 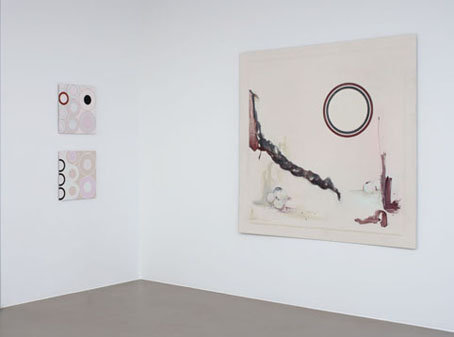 “For me, to become more radical or better: more consistent,” Susanne Paesler said in 1994, “means becoming more decorative. I believe that the decorative can be a way of conveying something that lies beyond decoration, but I would like my work to retain its ambivalence between questioning and confirming the status quo.” This ambivalence is highly significant in the reception of Susanne Paesler’s painting, because it challenges the rather uptight imperative that demands that critical and clever observers of art dislike her objects. But Susanne Paesler’s pictures are attractive; they draw us in inexorably, and our own pleasure then becomes uncanny because they defamiliarise the familiar: geometrical abstraction looks like patterns for materials, delicate pastel colours look like make-up, and imposing picture frames turn out to be optical illusions.

Susanne Paesler makes an issue of our sense of taste – this strange and productive dis/interest – and does not pretend as if it did not exist. It is a kind of domesticated modernism, in no way metaphysically charged, that enables this praxis of new abstraction in painting. Susanne Paesler’s works can be seen as creating a basis for painting only from the perspective of interior design and fashion, having nothing in common with irony or persiflage, but instead consistently continuing the history of the panel painting from a very specific point of view.
This includes reworking Jackson Pollock’s legendary drip paintings or Lucio Fontana’s cuts, and allusions to Bridget Riley’s optical illusions. Works like these have their own trademark signature in the cultural text of the twentieth century.

Susanne Paesler played out painting in a kind of system. A system both in terms of form and context, but nonetheless in a way that contradicts the concept of a system, certainly not producing barren, unemotional surfaces, but rather demonstrating the analytical side to beauty in an optically scintillating manner. Her oeuvre establishes critical elegance within the spectrum of geometrical abstraction, calligraphic abbreviations, elements of landscape, floral associations and ornamental patterns. Working on the basis of her awareness of a cultural history of the gestures of earlier painters, Susanne Paesler remodelled these gestures into her own gesture, and not as an exact copy, thereby examining them as patterns and models, or pictures in the sense of standards. Even the highly detailed and unblemished checked texture of her early work, which marked her artistic success right after finishing her studies at the Städelschule in Frankfurt/Main, can be understood as this kind of gesture.

For many years Susanne Paesler was interested in the picture frame as the test case of the limitations of the image, and this interest led her away from working with her hands to the materialisation of the framework conditions of contemporary painting. In a particularly astute way, and also with astute sensitivity, Susanne Paesler then transferred this approach to her own signature as a counterpart to the label used in fashion, but also as the traditional artistic authorisation which ends the painting. Using the computer – in general a very important means of production in her work – to translate the signature into pixels, Susanne Paesler cited her own signature again and again in her preferred typeface, and also in a handwritten version and above all in varying dimensions.

In some of the late compositions of regular geometrical forms and curves it became sufficient to use just the enlarged final letter of her surname, an “r”. This idiosyncratic dynamic trace carries the picture into dimensions of abstraction in a double sense: if the signature is used as the basis for calculating the actual size of a work, based on the accepted dimensions of an artist’s signature, then the size of this work would transcend all hitherto known large formats in painting. The signature also plays an important role in one of the artist’s most recent and most impressive pictures. Unlike the landscapes and the motifs reminiscent of still lifes, it continues the artist’s interest in patterns. Here Paesler adapted a version of a pattern in the style of folk art and developed a shining, ornamental figure in the shape of a candelabrum.

Notwithstanding all the aesthetic attraction of the surfaces, Susanne Paesler’s painting possesses both a complex and resistant visual intelligence, paired with a vulnerability that signifies every form of investigation of the personal. The artist died after a long illness in August 2006. This exhibition shows an inimitable oeuvre; it also marks the beginning of a re-evaluation, which will not only prove that this position in painting is unique, but also that it will bear fruit for the future.
Hanne Loreck