The Gallery open its centenary celebrations with Ireland's first major public art installation of works by internationally artist Julian Opie. "Walking on O'Connell Street" comprises of four animated LED screens placed on the central median of O'Connell Street and one outside the gallery on Parnell Square. Borrowing from scientific imagery and maps of both the natural and manmade world, Mark Francis' recent work renews one's interest in abstraction. 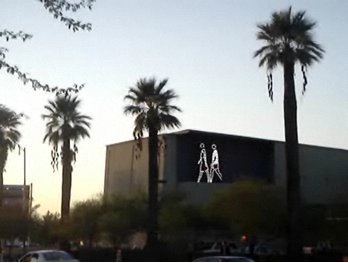 Curated by Barbara Dawson and entitled Julian Opie Walking on O’Connell Street the exhibition comprises of four animated LED screens placed on the central median of O’Connell Street and one outside the gallery on Parnell Square.

Julian Opie is widely recognised as one of the most pre-eminent artists working within the public realm today. Blurring the relations between artist and non-artist within our society, Opie’s images are elemental in appearance though amongst the most complex and sophisticated in contemporary art practice. They reveal to us that that culture is malleable, exciting, free, and all around us.

Challenging the traditional gallery relationship between art and its consumers, where the context alone demands concentration, intimacy, study and time, Julian Opie’s installation of works on Dublin’s O Connell Street allow everyone access, immediacy, and sophistication without the usual pomp of public art.

Today we are surrounded by so much culture that it tends to become invisible and much of it is of little concern to the everyday lives of individuals. This debate alone is worth the initial risk and investment of placing art in the public realm. It makes for the kind of robust exchange of views that is the lifeblood of any democracy.

As a successful artist who exhibits internationally, Opie uses computers in art to present items of everyday life. His style was brought to a wider audience as part of the stage sets for Dublin based rock band U2, and their Vertigo world tour of 2005, where he showed another LED screen displaying an aimless walking man figure.

Julian Opie was born in London and raised in Oxford He is a graduate of Goldsmiths College (1979–82).His highly stylised work, involves the reduction of photographs (or short films) into figurative reproductions (created using computer software). In his portraiture, the human face is characterised by black outlines with flat areas of colour, and minimalised detail, to the extent that an eye can become just the black circle of the pupil, and sometimes a head is represented by a circle with a space where the neck would be. Opie has exhibited to acclaim all over the world and his work features heavily in collections including the Carnegie Museum, Pittsburgh, Contemporary Art Society, Britain, Deutsche Bank, Frankfurt; ICA, Boston; Institut Valencià d'Art Modern, Spain; Kunsthaus Zurich; Museo d'Arte Contemporanea Prato; Museum of Modern Art, New York; National Gallery of Victoria, Melbourne; National Portrait Gallery, London; The British Museum, London; The Calouste Gulbenkia n Foundation, Portugal; The National Museum of Art, Osaka; The Tate Gallery, London; The Victoria and Albert Museum, London.

Images for this exhibition are featured on Julian Opie’s website http://www.julianopie.com

For further information on the temporary exhibitions programme contact

Borrowing from scientific imagery and maps of both the natural and manmade world, Mark Francis’ recent work renews one’s interest in abstraction. The exhibition centres around three large diptychs, titledTimbre I, II, and III, in which Francis responds directly to sound and vibration. The paintings of Mark Francis present us with rhythmic compositions that seem part-electronic, part-organic. Cadences made material with forms strung on supports throbbing across the picture plane. The content is neither figurative nor abstract. What are they? Pictures of things from so close up, that they seem to pixelate.

Admission to the Permanent Collection is free. Groups must contact the Education Department of the Gallery in advance to arrange visiting the Studio.