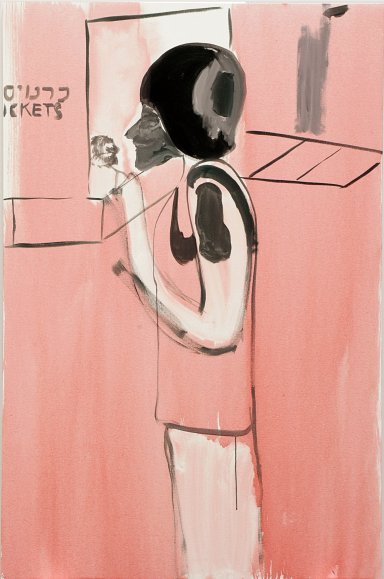 The work of Israeli painter and draftsman Avner Ben-Gal (b. 1966) shows barren land-scapes with burning houses and isolated figures. The implied narratives have nothing in common with the propagandistic images of the mass media which confront us from the Near East day after day. Instead they create a reality that interprets recent history within the framework of their own poetic and fantastical universe. At the same time, the grim undertones of these often mythologically or allegorically charged pictures engage in subtle reflection on the artist’s painterly means. Hence, the dreamlike scenarios literally escape observation, being obscured and sometimes even invisible under a monochrome veil of colour.

Because of his biography, Avner Ben-Gal’s work has often been brought into connection with current affairs in specific places, and interpreted as an apocalyptic vision. For the artist, history is not captured as an iconic distillation; instead, an atmospheric and emotional quality is set into the picture, as it emerges from the specific practice of painting. Underlying his pictures is the repressed and the already seen, which only in the process of painting can be unearthed and elaborated. New, never before seen images are not found in this way, but the entire complexity of visual representation makes itself visible.

Avner Ben-Gal has been represented in international solo and group exhibitions. The selection on view in this solo exhibition at the Museum für Gegenwartskunst Basel will include some of his most recent paintings and drawings.

On the occasion of the exhibition there will be a catalogue published at Hatje Cantz with a contribution by Philipp Kaiser and a conversation between Yael Bergstein and Avner Ben-Gal; 152 pages, CHF 42.--.

Andreas Gursky, who was born in Leipzig in 1955 and now lives in Dusseldorf , is widely regarded as one of the world’s foremost contemporary photographers.
This exhibition, in concentrated form, presents some 25 works by the artist, most of them created in 2007. They include new motifs within the familiar thematic spectrum of recent years, such as a stock exchange trading floor in and the interior of a Frankfurt nightclub, as well as photographs from the latest series Pyongyang and F1 Pit Stop.

Swiss artist Otto Meyer-Amden (1885-1933) and German painter Oskar Schlemmer (1888-1943) first met in the summer of 1911 in Christian Landenberger's painting class at the Stuttgart Academy. When Otto Meyer moved to Amden in Switzerland in the autumn of 1912, the two peers kept up a prolific correspondence. Their letters bear witness to a deep mutual respect and understanding. This exhibition juxtaposes the drawings and paintings of both artists. In spite of their superficial differences, both reveal a tendency towards geometric abstraction and forms charged with spiritual content. One of the highlights of the exhibition is the display of Schlemmer's rarely-seen "Fensterbilder " ("window pictures"), which are on permanent loan to the Kupferstichkabinett.