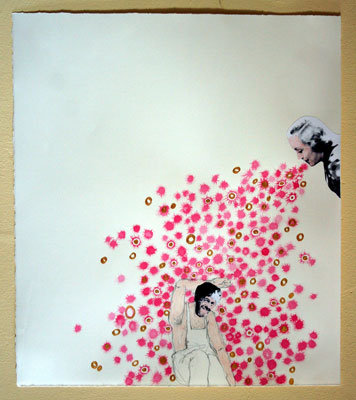 The exhibition includes a number of new animations and 20 works on paper. In all of these works, Yasinsky refers in different ways to Jean Vigo's 1934 feature film L'Atalante, which also provides the title for the exhibition. The film is both a source and a starting point for all these works, but then the artist abandons the filmâ€™s narrative, distancing herself from the lineal drama so as to draw closer to it through specific images.

It is important to note that the artist does not expect her audience to know the classic film L'Atalante and that it is not essential for an understanding of her work.

The key work in this show is the projected stop-motion animation La Nuit, shown in a completely darkened room. Here the two film characters Juliette und Jean, who are recently married, spend one night of willful seperation. As in several earlier Yasinsky animations, the characters are played by puppets made by the artist, and the scenes are enacted against a background of sound and music with no spoken words. The atmosphere is close, tense and sometimes oppressive, but not as a result of the lovers being separated--the characters appear inherently introspective, more interested in the hidden depths within themselves than their absent lover. Although the faces of the puppets do not change, they seem to come alive as the film progresses. But the film does not tell a story in the sense of a plot or some psychological development, as the work rather circles around an idea using the language of film.

Yasinsky's works on paper are based on film stills taken from a book about L'Atalante and copied or redrawn. Some stills have been reworked several times, using very differing drawing techniques in black and white and in color, as well as collages. Some of these works concentrate on the presentation of the characters, whereas others emphasize decorative elements. The patterns seem to become independent, and some are reminiscent of art nouveau ornament. Here too Yasinsky departs from the level of narration, but some of the selected scenes involve highly expressive situations between people--the lovers or newly wed Jean and Juliette, Juliette and the sailor Jules--so that the viewer inevitably starts to tell his or her own (new) story, especially as Yasinsky's drawing techniques also lead to new associations. Here Yasinsky moves progressively away from the film L'Atalante by intervening with drawing in the details of the stills.

A further focus of the exhibition is on three of the four drawn animations. Here Yasinsky operates within a classical medium, but uses it innovatively by attempting the paradox of a motionless animation. In the film Jules and Juliette, for example, Jules, the tattooed sailor from the ship called L'Atalante, is seen bending down over Juliette. This moment is "frozen" like in a still, and nonetheless the film is animated, as Yasinsky draws each of the 12 images per second anew as identical drawings that, however, cannot exactly reproduce the preceding image. This means that the picture is not standing completely still--it seems to be animated and the characters seem to be moving because their outlines shimmer gently.

Looking at the "still" but slightly animated image for a while on the monitor, the viewer imagines "real" movement--the sailor's chain sways and then stops moving again, and the viewer is not sure if this is an just optical illusion or one of the small movements of the animated picture.

This film in particular, with its subtle sexual energy, shows Yasinsky's aim of looking at complex issues beyond language and spoken words, and literally holding fast to the unspoken and unspeakable in various media.

Karen Yasinsky was born in 1965 in Pittsburgh, she lives and works in Baltimore, Maryland.

Her work has been recently exhibited at The Baltimore Museum of Art, at The Sculpture Center in Long Island City and in a solo installation at the Wexner Center for the Arts in Columbus, Ohio. In 2002, the UCLA Hammer Museum presented a solo exhibition of Yasinsky's "Still Life with Cows".

On April 28, 2008 Karen Yasinsky will be holding a lecture speaking about her work in the course of Modern Mondays at the Museum of Modern Art, New York.