A multi-channel video installation, Paradise, explores the construction of both the myth and reality of Southern California. It is installed in two concentric circles of monitors with a changing central figure, 24 in total. Each is audible through earphones, necessitating an intimate, one-on-one interaction with each storyteller. 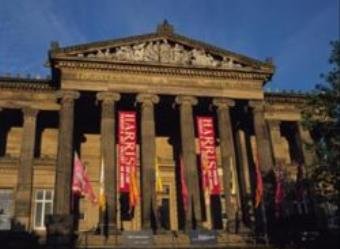 With the international popularity of television shows such as The O.C., The Real Housewives of Orange County and Laguna Beach, Orange County has come to represent a certain kind of paradise in the minds of millions of people who have never been there.

In response to this phenomenon, artist Kutlug Ataman’s new multi-channel video installation, Paradise, explores the construction of both the myth and reality of Southern California. Co-commissioned by Harris Museum & Art Gallery Preston, Paradise has its UK premiere at the gallery in January 2008 and will be a highlight of a larger presentation here of past work by Ataman.

Filmed in a wide-screen format suggestive of Hollywood films, the piece combines video interviews with 24 typical and a-typical residents of Southern California, including the teenager who wants to be a star, the founder of the first drive-in church and the Philip Johnson–designed Crystal Cathedral, a retired Emmy Award–winning producer who performs tableau-vivant recreations of celebrated art works, members of the Laguna Beach laughter yoga club, and Southern California’s most famous chronicler of the apocalypse. Other members of this ad hoc community include a wedding planner, a thanatologist who counsels on death, a space and time traveller, and a surfer and Quiksilver executive. Also participating is “the lingerie monk” - founder of a non-sectarian meditation and spiritual study group and former lingerie salesman at Playmates on Hollywood Boulevard, and the numerologist who offers predictions for the future of California.

Altogether, these personalities create a complex, multi-layered portrait of the region. According to Ataman “talking is the only meaningful activity we are capable of.” In keeping with this, Ataman’s new work explores “how individuals construct themselves within the play of paradise and how they engineer and construct paradise through their narratives.”

Paradise is installed in two concentric circles of monitors with a changing central figure, 24 in total. Each is audible through earphones, necessitating an intimate, one-on-one interaction with each storyteller. Walking into the circle, visitors enter the piece and become part of the community, part of the fabrication. Ataman deftly, and with great humanity, leads the viewer into this circle of personalities and their ideas, providing the means to weave a unique parable about paradise in America in the 21st century.

Born in Istanbul in 1961, Kutlug Ataman studied film at UCLA, graduating with an MFA in 1988. A resident of Istanbul, Buenos Aires, and London, Ataman has been featured in exhibitions at the Museum of Modern Art, New York, Tate Britain, and the Museum of Contemporary Art, Sydney. His work has also been included in the Venice Biennale (1999) and Documenta 11 (2002) and he is a recent recipient of the Carnegie Prize.

The Harris Museum & Art Gallery is one of the leading venues in the North West for exhibiting contemporary art and is the only venue in the region to have been short listed for the new international contemporary collecting scheme, Art Fund International.