Her work analyzes the possibilities of film in visual art. She often challenges the conventions and assumptions of the documentary genre. Drawn to individuals with unusual personal histories, she creates intimate portraits that question their own veracity, revealing the inherent instability (perhaps even impossibility) of narrating one's life as a coherent biography. In working with the same people (often actors, musicians, intellectuals) over extended periods of time, de Boer explores the disjunctions between lived time and recorded history. 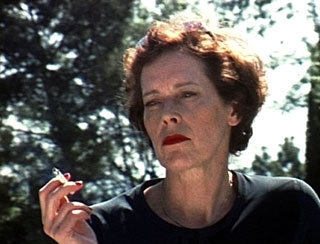 Manon de Boer’s work analyzes the possibilities of film in visual art. She often challenges the conventions and assumptions of the documentary genre. Drawn to individuals with unusual personal histories, she creates intimate portraits that question their own veracity, revealing the inherent instability (perhaps even impossibility) of narrating one’s life as a coherent biography.

In working with the same people (often actors, musicians, intellectuals) over extended periods of time, de Boer explores the disjunctions between lived time and recorded history. Her work captures the post-Modern shift from communal to individual histories. With the repetitions and cuts in her films, she avoids portraying time as either linear or chronological.

Witte de With presents two films by de Boer: Sylvia Kristel – Paris (2003) and Presto, Perfect Sound (2006). The earlier work is constructed around two interviews carried out by de Boer two years apart with the actress who rose to fame as the star of “Emmanuelle”. Kristel’s stories wander fluidly through key points in her life, turning mainly around her many love affairs and the cities in which they took place. The city to which her story returns most frequently is Paris, and while we hear Kristel’s voice, we see images of Paris filmed by a handheld camera. At first, the super-8 images seem to have been recorded in the era of which Kristel speaks, an illusion destroyed by the inclusion of architecture clearly built in recent years. We only see Kristel herself twice, smoking silently and resembling a screen goddess of the Golden Age of Hollywood. These brief appearances punctuate the two interviews, whose emphasis alters considerably, revealing certain inconsistencies in the process of remembering and recounting, her poignant pauses underlining what is left unsaid.

In addition to the sound of Kristel’s voice, we hear the muted sounds of the city intermingled with music by George van Dam, a composer with whom de Boer has also worked on previous films. He becomes the subject of Presto, Perfect Sound, which depicts van Dam playing his violin, his head centered in the frame. The film’s title comes from the piece he plays, the fourth movement of Belà Bartòk’s Sonata for Violin Solo Sz 117 (1944), chosen for its length (5 minutes), speed and plot-like structure. “We found this sequence of different moods or temperatures to be very rich in a narrative sense and particularly suited for a filmed performance”, explains the musician. De Boer then chose the edit together the various takes of this performance in a way that created a perfect sound, ie. that gave priority to the quality and continuity of sound rather than image. This means that when watching the film, we see the cuts but we do not hear them. This is not the first work of de Boer’s in which the central figure is playing music – in Robert, June 1996, for example, the main character played the guitar – but it is not so much the music itself as its repetition that makes it a key motif for de Boer. For her, whether she is working with a musical score or a personal narration, it is the shifts and changes that occur in repetition that are the most telling.

“Rather than suggesting that her subjects are permanently indelible forms or mere reflective surfaces, de Boer lets their identities emerge like photographs in a dark room, developing over the course of their recollections – exposing some areas and hiding others, until their surfaces reveal as much as they conceal” (Christy Lange, Frieze, Jun-Aug 2006, p. 234).

These two films will be screened within the framework of Liam Gillick’s solo exhibition at Witte de With, which has imposed an architectural meta-structure onto the gallery spaces, designating which rooms are to be used for the presentation of his own work and which are to be seen as “institutional zones”. The director, Nicolaus Schafhausen, has chosen to use these institutional zones to present the work of other artists, beginning with Manon de Boer.

Manon de Boer’s exhibition at Witte de With coincides with the International Film Festival Rotterdam, 23 Jan - 3 Feb 2008, highlighting her important contribution to film as a medium.
Visitors with a IFFR Tijgerpas are offered free entry to Witte de With for the duration of the festival.

The show in Rotterdam immediately precedes her solo exhibition at the Frankfurther Kunstverein (8 Feb – 27 Apr 2008), www.fkv.de, with whom Witte de With is collaborating to co-produce the first publication dedicated to her work, to appear in spring 2008. It includes contributions by Elena Crippa, Lars Bang Larsen, Chus Martínez, Suely Rolnik and Jon Wozzencroft.