Working independent of his contemporaries from the 1960's up to the 90's, Miroslav Tichy created an idiosyncratic style, fascinating in its imperfection and reminiscent of photography's early experimental years. By contrast photographer Julia Margaret Cameron (1815-1879), part of Victorian England's privileged cultural elite, was able to devote herself to exploring the new medium of her time, assiduously taking portraits of her circle of friends. 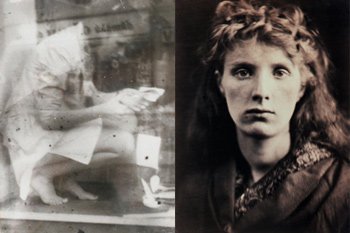 Magasin 3 Stockholm Konsthall starts this year’s exhibition program with an encounter between a recently “discovered” contemporary artist, Miroslav Tichy, and an early star in the writing of photographic history, Julia Margaret Cameron.

Working independent of his contemporaries from the 1960’s up to the 90’s, Miroslav Tichy (b. 1926, Czech Republic) created an idiosyncratic style, fascinating in its imperfection and reminiscent of photography’s early experimental years. Using homemade cameras Tichy took blurry, mottled photographs in his Moravian home town Kyjov. His anonymous portraits depict mothers, waitresses, students, sitting on park benches, waiting for the bus or in conversation with a friend – moments from everyday life and often framed by
elaborate mounts.

By contrast photographer Julia Margaret Cameron (1815–1879), part of Victorian England’s privileged cultural elite, was able to devote herself to exploring the new medium of her time, assiduously taking portraits of her circle of friends. Authors, scientists, artists and their families were captured in dream-like, allegorical images or intimate portraits. Cameron gained early acclaim as a photographic innovator for her experiments with composition and lighting, and today her works still surprise with their timeless expression.

The exhibition presents for the first time in Scandinavia a wide selection of Miroslav Tichy’s extensive production and a small group of excellent works by Julia Margaret Cameron. The curator Tessa Praun is pleased about this opportunity and says:
“It is fantastic to be able to show Tichy’s works that have been tucked away from a public until only a few years ago, and see them together with some of Cameron’s most distinguished and intriguing portraits”.

A documentary about Miroslav Tichy called “Tarzan retired”, 2004, made by Roman Buxbaum, founder of Foundation Tichy Ocean, will also be on view.

In conjunction to the exhibition Magasin 3 will publish a richly illustrated book.

Photographic works by Miroslav Tichy were for the first time shown in a group exhibition at Die Blaue Kunsthalle in Cologne (DE) in 1990 and in 2004 at the Seville Biennale. In 2005 Kunsthalle Zürich (CH) presented Tichy’s first solo exhibition and since then his work has been shown in Canada, USA, Germany, and most recently in China. The Centre Pompidou in Paris (FR) will also host a solo exhibition in May 2008.

Julia Margaret Cameron became a member of the Photographic Societies of London and Scotland in 1864, one year after she started to photograph. She exhibited and published her works extensively and sometimes charged for her portraits. Today Cameron’s photographs are widely known but rarely exhibited.

On Saturday, 26 January at 3pm Roman Buxbaum will give a lecture at Magasin 3.