The untitled installation of Terence Koh consists mainly of a superlatively bright electric light - so bright that the viewer is momentarily blinded by looking at it. Read My Lips is a group exhibition which brings to mind how the use of imagery related to the body, but also textual information (or both) is and has been used by artists addressing societal, sexual and political concerns. 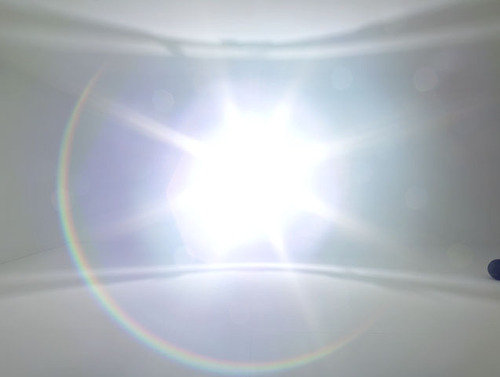 Javier Peres is pleased to present "Untitled," Terence Koh's third Berlin solo exhibition, a reprise of the artist's 2007 solo exhibition at the Whitney Museum of American Art in New York. The untitled installation consists mainly of a superlatively bright electric light - so bright that the viewer is momentarily blinded by looking at it. Holland Cotter of the New York Times called it one of the most memorable artistic events of 2007, commenting, "Like a person's life, it turned on; gave off its energy intensely, randomly, wastefully; and then turned off. Brilliant."

Koh's installation at Peres Projects II in Berlin marks the work's premiere in Europe, where it is presented alone in a 400 square meter space in a context that affords it freedom from institutional interference. The exhibition space – traditionally a void and projection screen for the viewer's contemplation – is inversed, indeed exploded by the super-luminescence of the work. It is the paradox of an infinitely radiating black hole – emptiness, and yet ecstasy, illumination.

Over the past 5 years, Terence Koh's works have been exhibited extensively in Europe and the United States. Upcoming museum solo exhibitions include the Schirn Kunsthalle, Frankfurt, Germany (with catalog by curator Martina Weinhart); and, the Museo de Arte Contemporaneo de Castilla y Leon, Leon, Spain (MUSAC), with an extensive monograph with essays by curator Agustin Perez Rubio, as well as by Hans Ulrich Obrist and Klaus Biesenbach. The artist will also be doing a site-specific performance and installation at the Yokohama Triennial, curated by Daniel Birnbaum, Hu Fang, Akiko Miyake, Hans Ulrich Obrist, and Beatrix Ruf. Recent solo museum exhibitions include the Whitney Museum of American Art, New York in 2007 curated by Shamim Momin, and in 2006 a solo exhibition at the Kunsthalle Zürich curated by Beatrix Ruf, with a catalog co-published by the two institutions. Koh's work can be found in important private collections in the US, Latin America, Europe and Asia, as well as in many public collections, including the Whitney Museum of American Art (NY); The Tate Modern (London); The Museum of Contemporary Art (LA); The Judith Rothschild Foundation Collection of Contemporary Drawings, The Museum of Modern Art (NY); and, the Grand Duke Jean Museum of Modern Art (Luxembourg).
"Untitled" by Terence Koh will be on view at Peres Projects II Berlin (Schlesische Str. 26, Berlin-Kreuzberg) through February 23.

"Read My Lips", initially a term immortalized by former president of the United States, George W. Bush in 1988 at the National Republican Convention as he accepted his nomination. Very soon after, used/appropriated by the American AIDS activist group Gran Fury, an ad hoc art collective (some autonomous and sometimes anonymous artists and designers) who exploited the power of art to end the AIDS crisis. They called themselves Gran Fury after the Plymouth model of automobile used by the New York City Police Department. This exhibition was conceived with the simple yet powerful Gran Fury poster of the late 1980s - Read My Lips - which brings to mind how the use of imagery related to the body, but also textual information (or both) is and has been used by artists addressing societal, sexual and political concerns.

There are vintage images of Eugen Sandow, who, in 1901, created the world's first physique competition at London's Royal Albert Hall. Not only deemed the first modern body builder, he is also the figure, on top of the trophy, of the ultimate prize in bodybuilding competitions, Mr. Olympia. 1950's infamous legend, AMG photographer/publisher, Bob Mizer, who for almost 50 years out of Los Angeles ran his in-house photo studio, also deemed "The Compound". Originally conceived as a talent agency of male archetypes for the booming film industry (not unlike a modeling agency), it would manage to survive the heavy-handed morality crusades of the 40's and 50's. He created a one-man industry of underground photographs that could be purchased via mail order, selected from his self-published magazine, Physique Pictorial, started in 1951 after his advertisements were refused by bodybuilder and health magazines of the day. On display here are the actual examples of the photos he would send out for the "clients'" selection. Many actors and muscle men, gay and straight, got their start posing for Mizer: Joe Dallesandro, Ed Fury, Glen Corbet, and California's current Governor, Arnold Schwarzenegger. As art critic Michael Duncan has stated: "Mizer showed his models as young gods, worthy of respect. A homegrown classicist, he presented an idealized side of desire that the ancient Greeks would have understood."

A schoolteacher in Omaha, Nebraska before he motored West, Bruce Bellas, better known as Bruce of LA, was also part of this small group of physique pictorialists. Much like Bob Mizer, he too photographed many of the same celebrities as Mizer…Ed Fury, Joe Dallesandro...etc. But Bruce of LA seemed to focus more of his attention on professional Southern California body builders than hunting Hollywood "street trade".

Tamotsu Yato worked throughout the 70's and still remains unknown to most but one of the first Japanese photographers to capture the Japanese male nude. His work has been published in three books during his lifetime, "Young Samurai: Young Bodybuilders of Japan", "Naked Festival", "Otoko: Photo studies of Japanese Male". A close friend of writer Yukio Mishima, and one of Mishima's favorite photographers, Mishima wrote the introduction to Yato's book, "Naked Festival". Yato was a very prolific photographer and yet few actual photographs remain (he requested that, right after he dies, only a few of his closest friends "clean out" his apartment and take away/destroy his negatives and photographs before any family arrived to view the apartment). Thus what remains of Yato's work, besides his published work, are the few photographs and negatives which are mainly in private collections of his personal friends and his ex lover, who still resides in Japan today.

Japanese master photographer, Nobuyoshi Araki: What keeps a man of 68 running like this, however, his motivations, he insists, are the great, eternal themes of art -- love and death -- which are forever twinned in his work, and which, he says, find their ultimate expression in explorations of the female nude. He has so famously become the master of the nude that would-be subjects -- housewives, celebrities, college students, aspiring actresses, dancers and models -- haunt him. Araki states, ''in the end, you reach shunga,'' he said, referring to the tradition of sexually explicit woodblock prints. ''I understand why Picasso painted erotica when he was older. As your physical capacity declines, the artist's mind becomes more excited. People say shunga depicted physicality, but it is actually the representation of these fantasies.''

In regards to his other well-known subject, flowers, this is how it all started: Higanbana (cluster-amaryllises) - flowers of the autumn equinox, flowers for the dead and graveyards... Reports have it that the first flowers that Araki captured in his photographic works happened to be these particular flowers. Araki was born in Minowa, in downtown Tokyo, and his childhood play grounds were the Yoshiwara gay quarters and Jokanji Temple, where Yoshiwara prostitutes who had died were brought and summarily buried. Cluster-amaryllises were everywhere in the temple's graveyards. Flowers are actually reproductive organs; they are wombs wherein new life materializes and the future begins. Flowers, in human terms, are the space where love is consummated. It is no wonder that they are often used as symbols of happiness. Mr. Araki's flowers, however, are moribund even in the prime of their life. They are flowers of Thanatos lurking in Eros and are starkly sterile. It is exactly for that reason that Araki's flowers can aptly symbolize our present time.

From Colt Studios, we have images of Chris Dickerson. Dickerson's career spanned 30 years and included approximately 50 contests. Over the decades, he built a dense and symmetrical physique augmented by a dramatic style of posing. Two particular achievements stand out in Dickerson's long career. He became the first African American AAU Mr. America in 1970 and by winning the IFBB Mr. Olympia in 1982, at the age of 43; which has also made him the oldest winner of the sport's most prestigious title to date.