The artist photographs places that have a personal significance for her, objects, self-portraits, and above all people that she loves. Goldin's work reflects her changing life situations, her ongoing relationships and lifestyles, building up into a virtual autobiography. Her landscapes and still lifes are also self-portraits of a kind, symbols of moods and emotions. Empty rooms and objects evoke the traces of life and presence and of loneliness, and they allude to departure and loss, a constant search for a place in this world. 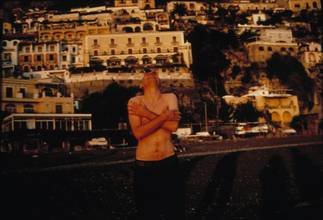 Nan Goldin's subjects are inseparable from her life. She photographs places that have a personal significance for her, objects, self-portraits, and above all people that she loves. Goldin speaks about the members of her extended family of friends and lovers as a tribe who are bound together by "bonds stronger than blood-family bonds, because the family was bonded by sensibilities, political views, aesthetics, sense of humor, shared history". Goldin's art reflects her changing life situations, her ongoing relationships and lifestyles, building up into a virtual autobiography.

Assumed Identity
Nan Goldin was born in 1953 in Washington D.C., and grew up in the suburb of Silver Spring in Maryland in a middle-class family with four children. Her sister Barbara's suicide at the age of 18 in 1965 was extremely traumatic for Goldin. As a result, she ran away from home when she was 14, adopted an alternative lifestyle and exchanged her biological family for a circle of friends.

Her wish to extricate herself from her family background led to an interest in assumed identities, taboo breaking and deviation from the norms. She began her career as a photographer in the early 1970s with black-and-white pictures of her transvestite friends, whose courage in transgressing gender roles she admired. The photos show the influence of fashion magazines such as Vogue and of the fashion photography of Helmut Newton and Guy Bourdin.

Goldin began her studies in photography at the Boston School of Fine Arts in 1974. She became acquainted with the work of Larry Clark and was impressed with his way of using his own life as material for his art and to depict reality directly, naturalistically. Goldin abandoned the calculated cool of glamour for a rougher and more candid approach. She exchanged black-and-white pictures for the vibrant and deep tones of colour slides, began using a flash and increasingly took pictures in interior settings.

Photographs of Life and Death
After moving to New York City in 1978, Goldin immersed herself in the nightlife of the city, its clubs and the drug scene. She worked for several years as a bartender in Times Square in a bar called Tin Pan Alley, which developed into a meeting place for the up-and-coming art scene in New York. Her abrasive lifestyle filled with drugs and alcohol abuse, parties and abusive relationships was reflected also in Goldin's photos. She showed her pictures in bars and clubs to the accompaniment of music. In 1986 she compiled photos of this stage in her life into a show of 800 slides entitled The Ballad of Sexual Dependency. The Ballad was Goldin's breakthrough as an artist. It is about the difficulty of relationships between women and men, about gender roles, the power of relationships, the struggle between independence and dependency, about violence, sexual desire and addiction.

In the mid-1980s AIDS began taking its toll in Goldin's circle of friends. Pictures of death, grief and loss emerged as a parallel to photos of sensuality, sexuality and passionate seizing of the day. According to Goldin, AIDS changed everything. The excessive lifestyle of her world with its idealisation of self-destruction and the romantic, suffering artist was replaced by a real will to survive and be supportive of one another. The Cookie Series (1978-1989) is about the life and death of Goldin's close friend, Cookie Mueller. It is a testament to Nan Goldin's life in the 1980s and also the end of an era.

Towards the Light
Goldin begun using drugs as a means to broaden her consciousness, to free herself of inhibitions and to feel togetherness, but the search for pleasure turned into a prison. Things culminated in Goldin's dark period in the mid-1980s. In 1988 she entered a detoxification clinic which marked the beginning of a new period in her life. According to Goldin she discovered daylight for the first time when she was hospitalised. She had previously taken photos almost exclusively in interiors. Her breaking of the vicious circle of drug abuse signified both a metaphorical and a visual step from darkness to light.

In the 1990s Goldin's photos became more introverted and silent, her subject matter more clearly defined. There is contact, gentleness and warmth in her pictures of couples. Relationships between women, a sensual and understanding intimacy, but also seductive beauty are among the main themes of her photos, especially those from her Paris period in the late 1990s. The locations in the photos moved from bars and clubs to the homes of friends and outdoors. Family life and affection between children and parents became a cherished subject for Goldin. She is fascinated by the authenticity of children, their simplicity and uncorrupted way of being themselves.

Self in Pictures
Goldin continuously takes self-portraits. She candidly depicts her own life, its different periods, her psychological states, dependencies and relationships. Withdrawal from a long period of drug abuse, a relapse in the beginning of the 2000s, depression and recovery are all preserved in photos where they appear as memories and moods, a kind of diary. Self-portraits are part of a process of recovery, self-discovery and reconstruction. The slide show All by Myself tells the story of Goldin's life over a period of more than 30 years, placing her in the same world as that whose inhabitants she has photographed throughout her career. The self-portraits are reminders of both destructive and happy relationships and periods in her life.

Goldin's landscapes and still lifes are also self-portraits of a kind, symbols of moods and emotions. In addition to remembering people, remembering places is important for Goldin. Empty rooms and objects evoke the traces of life and presence and of loneliness, and they allude to departure and loss, a constant search for a place in this world. Like many contemporary artists, Nan Goldin has many bases in different countries: she currently lives and works in Paris and New York City.