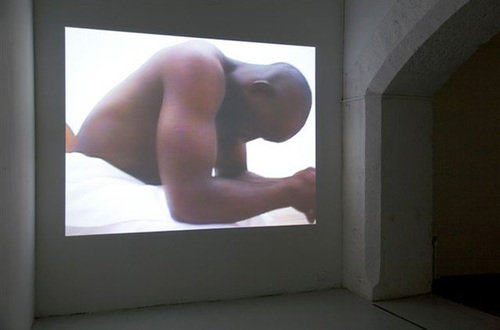 Barthélémy Toguo is a multi-disciplinary artist working in drawing, photography, sculpture, ceramics and performance. The artist will be in residency at BALTIC during December 2007 and January 2008 . As part of the residency process, Toguo will collaborate with Fine Art students from Northumbria University to produce new work.

The exhibition will comment on the use, abuse and excess of information in the era of global exchange. The artist and students will ‘censor’ pages from a UK daily broadsheet newspaper by deleting sections of text, using black marker pens, leaving only the images. This ‘democratic’ action will create a new ‘face’ for the newspaper page, allowing for new readings and asking us to question the information we receive.

Toguo believes that the media can be all consuming even intoxicating with its effects being both good and bad as he explains: “For me information is primordial. I’ve got the radio on all day. I like to read newspaper headlines and compare them according to their political sympathies. It’s a vital need to know what’s going on in the entire world. That overdose of information, scoops, scandals, disinformation naturally inspires me a lot. You need to step back, however, vis-à-vis the information, the press, precisely in order to disassociate the real info from the disinformation. But disinformation is a wonderful source of inspiration!”.

The ‘censored’ newspaper pages will be used as wallpaper, to transform the Ground Floor gallery, creating a poignant backdrop to a new series of integrated watercolours from the ongoing Dreamcatcher and Wild Cat Dinner series. Each painting will be approximately 280cm x 130cm in size. Using diluted colours the images investigate social concerns and depict bodies expressing universal emotional experiences including, joy, pain, pleasure, suffering, sex, violence and war.

2 As part of Heart Beat, Toguo will continue his ongoing Head Above Water project which has already been executed in Lagos, Cuba, Hiroshima, Johannesburg, Saint-Denis (France) and Kosovo… The artist will perform an action he describes as a ‘referendum’ by asking members of the community to send him a postcard with their message to the world. For the project in Gateshead, Toguo will ask for opinions about the presence of the UK Armed Forces in Iraq. 96 completed postcards will then be framed collectively and displayed alongside Toguo’s paintings.

Barthélémy Toguo was born in 1967 in Cameroon. In 1993 after studying at the School of Art, Abidjan, Ivory Coast he moved to Europe and began exhibiting and performing while finishing his studies at the Higher School of Art, Grenoble (France) and Kunstakademie of Dusseldorf (Germany). He currently lives and works between New York, Bandjoun (Cameroon) and Paris. Toguo has founded the Bandjoun Station Art Centre, Banjdoun to allow international artists from all disciplines to develop their work in collaboration with local communities.

Run, Black River, Run is the climax of the ongoing relationship between the 2006 Turner Prize nominee and BALTIC. After featuring in two group exhibitions and a small solo show The Future Is Behind Us, BALTIC is delighted to present this new show.

The eight giant banners are displayed on simple scaffolding frames, each presenting a positive slogan against a baroque, graphical background using only three colours: black, white and red. Motifs, such as particular leaves, decals and swirls can be found across all eight works in some form. Each of the short statements is derived from company mission and values statements of the world’s most successful brand. However it is suggested that as none of these slogans directly relate to the purpose of trying to sell a product, in isolation they can be perceived as a programme for selfimprovement for the individual.

WHAT WE DO WE DO WELL
IF IT IS TO BE IT IS UP TO ME
BE REAL
SEEK, IMAGINE, CREATE, DELIGHT
THE COURAGE TO SHAPE A BETTER FUTURE
COMMITTED IN HEART AND MIND
LEVERAGE COLLECTIVE GENIUS
EVERYWHERE WE ENGAGE

Despite the magnitude of these slogans Titchner explains: “Nowhere within them do they contain any real information about what they might really mean, let alone how they might actually be ideas that would be implemented in the world. After all, we would all like to ‘Be Real’, but what does that actually mean?” He adds: “What the emptiness in these slogans reveals is in fact the emptiness in us all. We continue to fall short of these aspirations that we have received, and our happiness will always depend on attaining what we endlessly aspire to.”

Also being shown in the exhibition is a recent kinetic sculpture, Ur Text (2006). Completing the exhibition is The Eye Don’t See Itself a kaleidoscopic projection of an unblinking eye against a phallic obelisk and presented in front of an endlessly shifting background based on a Rorschach inkblot, commonly believed to represent the father. Below the projection, this image is mirrored in a black reflecting pool. The obelisk and the reflecting pool reference The Washington Monument in Washington DC. The video employs a flickering light at a frequency of 10Hz which corresponds to the brain’s electrical activity in Alpha state as it attempts to alter the perception of the viewer (a reference to the work of the neuro-physiologist W Grey Walter and poet Brion Gysin). The video presentation is accompanied by a softly spoken audio of computerised male and female voices repeating a mantra to psychotic selfimprovement: ‘If you don’t like your life you can change it… After all what good is life without conquest?...If you can dream it you can do it.’

In addition to the exhibition being shown inside, BALTIC will present a giant banner I Want A Better Me, 2008 on the north face of its iconic building, standing some 18 by 14 meters.

CutUp are an anonymous group of artists whose practice incorporates collage, film and installation. They focus largely on the creative potential of the city as a site and inspiration for interventionist art and disruption. At BALTIC, they will create an installation in The Street using billboards, light boxes and reassembled bus shelter advertising posters. The exhibition alludes to the city's role in choreographing movements - both of the individual and the crowd amidst scenes of protest, celebration and modern spectacle.

BALTIC Centre for Contemporary Art is pleased to announce a solo show by American artist Barry McGee. Following his inclusion in BALTIC’s 2006 exhibition Spank the Monkey, McGee will combine new site-specific installations with a selection of reinterpretations on existing works.

Better known in the street art community of San Francisco by his graffiti tagging moniker ‘Twist’, Barry McGee is a clear and defiant voice in the persistent underground visual languages that narrate our cityscapes. Alongside his contemporaries, McGee is in constant battle to reclaim personal space in cities that are repainted with the same urgency that faceless commerce swells up around them. McGee describes his working as a way of taking back the surface of the streets and affirming a place in his surroundings.

His cult status within the street art community combined with a relevant and conscious understanding of his subject matter has allowed McGee to move confidently into gallery and institutional contexts. Using the same energy and frankness seen in his street works, McGee creates intricate environments within the exhibition space that are punctuated with the detritus of city excess. The seemingly disordered mass comprises of chaotic clusters of photos, drawings and paintings, flickering TV screens, an upturned vehicle, metal panels, electrical cabling and glass bottles. These are exhibited alongside failing, obsolete computers displaying the animated characters of McGee’s illustrated world. The sprawling installations are all individually consumed by the artist’s hand-painted figures and geometric shapes and contained within elaborate, mural-painted walls.

McGee carves a soulful and steady line through urban spaces, taking his influence from Mexican muralists, graffiti artists of the seventies and eighties as well as the lyric flow of the San Francisco beat poets. The tight graphic lines of McGee’s drawings maintain a quality of execution that show a practiced and marked respect for the traditional sign writers in the Mission district of San Francisco where he grew up.

At BALTIC, McGee will bring the elements of his varied working practices together to create an installation that will embody the spontaneity that has made him one of the most significant and respected graffiti artists to continue working since the early eighties.