Pictorialism and the Photograph as Art, 1845-1945 is a look at the artistic movement that transformed photography from a tool of documentation to one of the most exciting means of visual expression of the 20th century. The exhibition includes nearly 200 photographs. From the Sublime to the Social: artists have referenced the tree in order to make visible the forces that shape today's interpretations of the landscape. 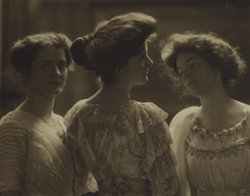 TruthBeauty
Pictorialism and the Photograph as Art, 1845-1945

TruthBeauty: Pictorialism and the Photograph as Art, 1845-1945 presents a fascinating look at the artistic movement that transformed photography from a tool of documentation to one of the most exciting means of visual expression of the twentieth century. Bringing together nearly 200 photographs from major museum collections around the world, the exhibition includes a large group of works from the George Eastman House International Museum of Photography and Film in Rochester, New York, the world’s oldest and most extensive photography museum, as well as important loans from The Museum of Modern Art and The Metropolitan Museum of Art in New York. On view at the Vancouver Art Gallery from February 2 to April 27, 2008, the exhibition is organized in collaboration with George Eastman House and is curated by Alison Nordström, curator of photographs, George Eastman House International Museum of Photography and Film.

“TruthBeauty presents a rare opportunity to experience a defining moment in the development of photography and the formation of modern photographic practice,” said Vancouver Art Gallery director Kathleen Bartels. “The conceptual, aesthetic and technical innovations of the Pictorialist artists continue to be highly influential more than 100 years later. Vancouver is one of the world’s foremost centres for contemporary photographic art, making the presentation of these masterworks of early photography especially meaningful.”

Reflecting the wide reach of Pictorialism, one of the first international artistic movements, this major presentation marks the first time that masterworks by renowned artists from North America, the United Kingdom, Europe, Japan and Australia have been brought together in a single exhibition. The presentation provides a historic overview of the full range of Pictorialism’s rich aesthetic photographic tradition and technical innovation.

Beginning in the late nineteenth century, Pictorialist artists sought to elevate photography to an art form equal to painting. Often compared to Impressionist painters, Pictorialist artists strove for an aesthetic that evoked a distinct mood or emotional response from the viewer. While painters achieved this through new ways of applying paint to canvas, Pictorialist artists experimented with a soft-focus approach, dramatic effects of light and richly coloured tones to create almost painterly works of art. Their compositions opened up a new world of visual expression in photography.

The main section of the exhibition features nearly 200 extraordinary Pictorialist photographs by the leading members of the movement, including Alvin Langdon Coburn, Robert Demachy, Frederick Evans, Elias Goldensky, Gertrude Käsebier, Heinrich Kühn, Edward Steichen and Alfred Stieglitz. The exhibition will trace the evolution of Pictorialism from its origins in the United Kingdom to its spread to Western Europe, Canada, the United States and beyond. Also included is a group of rare photographs by figures such as Julia Margaret Cameron and Peter Henry Emerson, British artists who preceded the origins of Pictorialism in the mid-1880s, but whose work would later inspire the Pictorialists to pursue photography as a true art form. Closing the exhibition is a selection of important photography by artists associated with the later Modernist tradition, such as Ansel Adams, Imogen Cunningham and Edward Weston, whose early work was firmly rooted in Pictorialist practice.

The Pictorialists were passionate proponents of art photography and formed a complex network of camera clubs, competitions and photography salons in key centres around the world. Instrumental in spreading the philosophy and visual aesthetic of Pictorialism worldwide were the number of photographic journals published by the movement’s champions. The exhibition includes a selection of these publications.

Led by Alison Nordström, Eastman House curator of photographs, the team contributing to the exhibition and accompanying publication includes scholars from the Tokyo Metropolitan Museum of Photography, the Museum of Decorative Arts, Prague and the National Gallery of Australia, Canberra. The exhibition is coordinated by Thomas Padon, adjunct curator, Vancouver Art Gallery.

The tree occupies a central role in many cultures and is deeply connected to personal and collective memory. It is especially meaningful in this country where the single tree has been a symbol of the solitary individual in nature and historically significant in the vocabulary of nation-building. In the early 20th century, the Group of Seven produced images of trees that articulated ideas of Canadian nationhood as bold breaks with British tradition. More recently, artists have referenced the tree in order to make visible the forces that shape today’s interpretations of the landscape.

The exhibition begins with images of the forest as a subject that inspires awe and instills reverence for the power of nature. This association with the spiritual and sublime is inherent in the historical work of Emily Carr and is further investigated by contemporary artists such as Ed Pien and Kevin Schmidt.

The Tree: From the Sublime to the Social is organized by the Vancouver Art Gallery and curated by Daina Augaitis, chief curator/associate director with assistant curator, Emmy Lee.