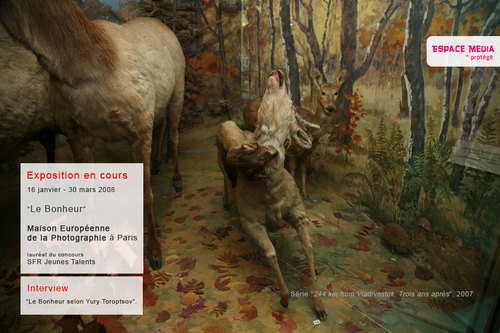 Jean-Christophe Ballot has been working with the urban landscape for the past twenty years, making "portraits of cities". He approaches the scenographic and symbolic dimension of public space, and urban tensions that arise when architectural volumes meet. Architectural features become protagonists in his compositions. Using a large-format camera, Jean-Christophe Ballot investigates the memory of places, revealing their theatricality and looking at city architecture in a contemplative and inspired way.
Jean-Christophe Ballot trained as an architect and pursues a dual career as both photographer and filmmaker (mainly documentaries).

"SFR Jeunes Talents Grafic" is an award scheme aimed at discovering young amateur and professional photographers. Open to all, it posts photographs on the Web and on mobile phones and offers the most talented participants professional support. The Maison Européenne de la Photographie supports this initiative by offering an exhibition space to the award-winner. Pictures by this year's winner Yury Toroptsov deal with the theme of happiness.

Born in 1974 in a small village near Vladivostok, Yury Toroptsov (www.toroptsov.com) left Russia in 1998 with a scholarship to study in New York. He graduated in management studies and began his career working for NGOs. In 2003, when he was working as a UN consultant, he decided to embark on a new career, pursuing his passion for photography in a professional capacity. He now lives and works in Paris.

Réalités was one of the most innovative and influential French magazines of the 50s and 60s. It was one of the most popular magazines in France, with 160,000 copies sold and more than a million readers. A luxurious, large-format publication, it set out to be " an observatory of the world " at a time when television was just beginning and when very few people were able to travel. It sent reporters and photographers to the four corners of the world, the most famous being Edouard Boubat and Jean-Philippe Charbonnier. This exhibition is an opportunity to discover the importance of photography in Réalités via 128 covers and double page spreads published in the magazine's heyday, and shows the pictures in the context in which they were published.

A "Peace Correspondent" in Jacques Prévert's words, Edouard Boubat was one of the leading French humanist photographers. From 1946 to 1999, he travelled through France and around the world as a reporter, capturing fleeting moments of happiness. His work, free of pain and tension, is a celebration of life, full of poetry, purity and tenderness. "A poet living in a world for which he had the key" (Raymond Grosset), he used to say that "Taking photographs is a way of expressing gratitude".

This retrospective presents a selection of over 150 prints, from his first photograph -La petite fille aux feuilles mortes- to his late photogrammes. It also includes photographs of some of the countries he visited.

Shoji Ueda is famous for his photographs taken against a backdrop of sand dunes. The charm and originality of these strange staged images - usually involving family members - have no equivalent in the history of photography. The rest of his work, on the fringes of documentary and realism, is less well known, at least outside Japan. The exhibition sets out to remedy this, presenting a themed retrospective of his career. Shoji Ueda uses a spare, poetic visual vocabulary, avoiding anything that is picturesque or trivial. He is hailed as one of the most brilliant Japanese photographers of the 20th century.

Peter Knapp's name is closely associated with Elle magazine, where he was artistic director for many years. A great page designer, Peter Knapp is also a photographer and filmmaker. His artistic work addresses both plastic and conceptual questions. This exhibition is an opportunity to explore the many facets of his work: photography, film, page design and drawing. Focusing on key stages in Knapp's vibrant career, it reflects his passionate curiosity for the endless forms and meanings images can have.