Since the inauguration of the building at the end of September 2007, this will be the first time that all of the galleries at this location will open together with new exhibitions on the same evening. For this occasion, the 8 international galleries within the building will each present a new solo exhibition, from a diverse range of both emerging and established contemporary artists. 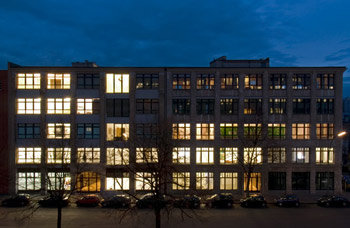 The galleries of the Lindenhaus in Berlin are pleased to announce an evening of new exhibitions opening on Friday, 1st February, 2008, 7-9 pm.

For this occasion, the 8 international galleries within the building will each present a new solo exhibition, from a diverse range of both emerging and established contemporary artists.
Since the inauguration of the building at the end of September 2007, this will be the first time that all of the galleries at this location will open together with new exhibitions on the same evening.

"Every artifact of culture has no other purpose than to be used by someone". Tal R

Over the past ten years, Tal R has developed a practice of generating ideas for his paintings through a series of etchings. This enormous collection of first hand material is featured in the upcoming exhibition. http://www.berlin-kopenhagen.de

For the first time, the artist Angela Dwyer throws figuration into her installation of paper works to reveal conflicts of meaning in words and imagery. http://www.galerievolkerdiehl.com

Takeoka, whose work has become well known since his participation in Documenta IX in 1992, has been living and working in Düsseldorf since 1973. In the mid-eighties, Takeoka started to explore the theme of the pedestal, which soon after became the focus of his sculptural work. Against their traditional function as instruments of distinction, his pedestals always remain empty. Thus Takeoka confronts us with pedestals as autonomous and fully legible sculptural forms, and by doing so comments on the development of modern sculpture. http://www.konradfischergalerie.de

In "Zensur 2 - Berlin" - the second exhibition since the opening of the new Galerie Gebr. Lehmann space in Berlin - Eberhard Havekost will present a new body of work. In parallel, his "Zensur 2 - Dresden" show will open simultaneously at the main gallery in Dresden. Eberhard Havekost’s 'Zensur' [Censorship] exhibitions are concerned with censorship and self-censorship in the translation of information, and the work presented in Berlin will be more specifically interested in space and rooms. http://www.galerie-gebr-lehmann.de

In his new project 'Millennium School', Krzysztof Zielinski returns to his hometown of Wabrzezno, Poland. The series of photographs of his former primary school, reveals how strongly images can return from the past, as in Proust's intense recollections of the Madeleine. "Millennium School" continues and compliments the photographer's well known project "Hometown", which has been exhibited internationally at the 26th Sao Paulo Biennale (2004) and the Prague Biennale (2003). http://www.galeriemagazin.com

Galerie Nordenhake is pleased to present a solo exhibition by the German artist Meuser. On display will be works made during the '90s, as well as a new piece prepared for the exhibition. Using almost exclusively salvaged pieces of scrap metal, Meuser's work is cast somewhere between sculpture, painting, and found objects. http://www.nordenhake.com

For his first solo exhibition in Germany, Austrian artist Christian Eisenberger (b. 1978) will use cardboard, wood and other disposable materials to create a large, sculptural installation at Galerie Opdahl. Additional works by Christian Eisenberger will be appear outside the gallery building and throughout the city of Berlin during the exhibition period, as a continuation of the artist's interest in spatial interventions in so-called public spaces. http://www.galerieopdahl.de

"STUFF" is the first solo exhibition in Berlin of the Bucharest based artist Dan Perjovschi (b. 1961). By staging postcards, faxes, drawings on paper and blackboards, notebooks and slide projection, the work presented at Galerija Gregor Podnar illustrates the different facets and the richness of Dan Perjovschi's drawing process. In parallel to these works, a large installation of hundreds of drawings will cover a major part of the gallery floor. http://www.gregorpodnar.com