A smile of the poet Wladyslaw Broniewski shines from one of the photographs of Zielinski's new series entitled "Millennium School". Broniewski's portrait brings us back to those educational realities of the communist era, to which the series corresponds. The artist's composition, deprived of artificial attractiveness, does not dominate over the recorded image. 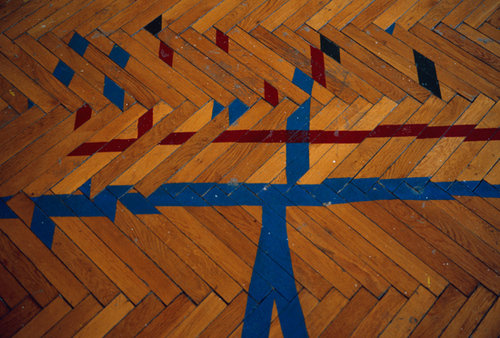 A smile of the poet Wladyslaw Broniewski shines from one of the photographs of Krzysztof Zielinski's series entitled Millennium School (2007). Broniewski's portrait was probably mounted on the school wall as far back as 30 or 40 years ago by the PRL ideologists who elevated him to the forefront of national poets and Polish Nobel prize winners. A couple of generations of school children have been taught to memorize and flawlessly recite his pre-war revolutionary prose and poetry glorifying socialism. During the wave of change that took place in 1989 in Poland, Broniewski disappeared from the mandatory school reading lists. His smile, beaming from the modern school classroom, doesn't entirely surprise those who still remember the "realities" of the polish school: Gone, but not entirely...

Broniewski's portrait brings us back to those educational realities of the communist era, to which the "Millennium School" series corresponds. Specifically, to the massive project of building "a thousand schools for the 1000 year existence of the Polish state" in 1966. Influenced by government propaganda, Polish citizens backed the program and a series of architecturally similar buildings from prefabricates were erected. On daily basis, these buildings served as a regular school facilities equipped with school tables and chairs; however, they were also built to be used in the event of an attack - let's not forget, this was during the cold war - as air raid shelters or temporary hospitals.
Everyone who has ever attended one of these schools remembers their multifunctional character (before summer holidays, schools located in tourist regions had their classrooms emptied and were transformed into youth hostels) and construction flaws resulting from hastened construction. Still, "millennium schools" were generally well liked. Their wide corridors were the perfect place for young students to play, huge window panes allowed lots of sunlight into classrooms, which were spatial enough to hold every child born in the postwar demographic boom period.

Primary School Nr 3 is a typical " Millennium School", situated in northern Poland in the town of Wabrzezno. Zielinski was proud to attend "Nr 3" - "it had the largest sports hall of all schools in town, and a football pitch, which I used as my own backyard"
The eight-year period of Zieliński's primary education is marked with significant dates: he started his first form in the year of the martial law declaration (1981) and left the school in 1989 the fall of communism in Poland

The artist began his primary education during the last regime, and grew up in times of political transition and eastern capitalism. He returned to Wabrzezno after subsequent periods of living abroad and suddenly saw a different town, one seen with the eyes of a visitor, with a surprisingly different perspective: Hometown (2000-03). Next, in the project Random Pleasures 2001-04, Zielinski attempted to discover the "heart" of the town through exploration of familiar interiors and close observation of intimate privacy.

It was then that he visited his school. "I'm entering something that I know well and remember as being dull-gray, and suddenly there's this orgy of colors. A complete shock". One can wonder what made a stronger impact on the artist: the rainbow of colors and ornaments that inundate the school walls, or the clash of what is known and personal with the new and alien. Analyzing Millennium School series it's hard to separate one from the other. It seems that behind his work lies in equal part a concept of an esthetical nature as well as a philosophical one. The series does not concentrate specifically on architecture or people's stories: it doesn't try to create a visualization of a school concept. Zielinski concentrates on the cognitive object, not yielding to the naive concept of cognitivity just for the sake of it. And not only do his objects escape experience, but they also evade any order or logic.
The artist has to face the chaos of multiple layers of political rule, a curious mix of old and new, with the exotic. He has to confront the weight of past experience and enigmatic present, the here and now, but also the shock mentioned above.

The viewer of Millennium School looks at Primary School Nr 3 in Wabrzezno differently, at the pictorial image and the picture itself simultaneously. The mentioned layers are present in the current series: we have the first stage of the story of "Millennium Schools" and the regime in which they functioned, with the patronizing picture of Broniewski on the wall and "obligatory" potted fern on the windowsill; there is the transition period with the already crowned polish eagle and the cross next to it, finally we have the computerized school classrooms symbolizing EU membership. Black chalkboards from the 60's can be seen next to newer green ones, all of them dominated by modern, recently introduced whiteboards.
A few dozen year old didactic aids and equipment stand next to new, so called European standard, probably seen as boring - masked under a coat of new, colorful paint.

In fact there seems to be a lot of paint everywhere. Following the Polish mindset, any leftover paint should be used. But the gray walls are not only splashed with colored paint, they are also covered with decorative, ornamental, often geometrically abstract forms. Suddenly from this horror vacui emerges consequence and conceptual thinking.

Zielinski's lens is not exclusively focused on the paintwork. He's also interested in the installation-like character of space, arranged perspective or detail. The shots are invariably characterized by a disciplined point of view and natural viewing angle. (due to standard viewing angle of the lens) and central perspective. Sometimes we come across a more dynamic, diagonal view, providing depth and stimulating the viewers' imagination. High quality silver dye bleach prints with their unique intensity, vivid colors, clarity and sharpness, provides interesting contrast with the spontaneous mediocrity of educational reality.

The composition, deprived of artificial attractiveness, does not dominate over the recorded image. The artist's creation gives way to documentation, the method of presentation is governed by the images presented (typical for Zielinski's work, who never interferes with reality or manipulates images). The photographer's objective attitude invites objects or beings from beyond the frame, leaving the audience to decide on their potential shape or appearance. The artist's image does not define everything, allowing the thinking eye of the receiver to notice more than is visible. Something accidental, but at the same time strong enough to sting, something Barthes called punctum. In that sense Millennium School is a universal experience. The series ends with one photograph showing students, a girl in the foreground looking straight into the camera, her outline slightly blurred...

The Millennium School project emerged during Zielinski's research on his Random Pleasures series. Both focus on objects and interiors known to the artist, although decidedly differ from one another when it comes to technique as well as the approach of the subject. Millennium school lacks that picturesque play of diffused light and subdued color with lyrical intimacy emphasized by the composition and small, vertical format of Random Pleasures. The previous project seems closer to the intimate character of Czech photography, which Zielinski explored during his studies at FAMU in Prague. In Millennium School, confrontation with the object, though intense, lacks intimacy. The photographer's decision not to stage the image, his disciplined approach to perspective, the choice of elevated viewpoint and concentration on a single thematic cycle bring him closer to the Dusseldorf school of photography. In terms of perspective and composition, some analogies can be made with Thomas Ruff's work from the 70's/80's (Interieur series). And yet the very same images simultaneously stress the distance between Millennium School and the achievements of Düsseldorf school photography.
Unlike the cold, documentary like style of the Dusseldorf school, Zielinski's work is more expressive. His" views" are disciplined but not exclusively focused on sociological, historical or biographical aspects. In the case of Millennium School, the mood often seems to be personal, resembling human emotions: from euphoria to sadness.

The project should be perceived in its entirety, as a complete series of 44 photographs, telling their own, rhythmical narrative. And pauses - minimalist white lamps or graphic outlines of a wall chart - breaking the ever-present fear of void in schools. Zielinski's series is not a simple illustration. It's a narrative based on the author's own experience - that's why it's far from being an ornament catalogue or overview of school typology. Nor is it a dry documentation of museum inventory. There is change of scenes, not only fragments visualization. We are given simple object identification and also space permeated with cultural meanings. Millennium School is a document of time and space, of the past and the present; it is a portrait of a place, capturing its unique atmosphere.