In Teenage Stories Julia Fullerton-Batten is exploring a state of mind which is interesting precisely because it does not know itself. Laura Henno's photographs trigger the impression that time has been suspended, frozen. Patricia & Marie-France Martin explore our sentiments and emotions, tracking and dissecting the human species and lifting the veil on its conscious and unconscious aspects. 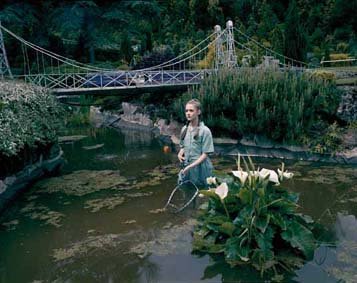 Galerie Les filles du calvaire is pleased to present the first solo exhibition in Belgium of the British photographer artist Julia Fullerton-Batten award winner 2007 of the Photography Foundation HSBC. Few subjects are more photographed than girls or young women. We live in a society that sometimes seems actually to be powered by pictures of women. From cheesecake to autobiography, from the oldest sales trick to the newest fashion, these are the most overwhelmingly numerous of images of all. To have something new to say in all that mass is an achievement of its own, but Julia Fullerton-Batten has found a subject and a manner both wholly compelling.

She sees with the clarity of a commercial photographer. A highly accurate user of the camera, she is not frightened of controlling a team of assistants or an elaborate arrangement of lights. But where commercial photography uses all those skills to arrive essentially at simplicity, Fullerton-Batten revels in using them to arrive at a lovely degree of sensitive complexity. When you photograph with Julia Fullerton-Batten’s determination to explore big subjects in detail, you discover that clarity need not involve any loss of subtlety.
She does not yet use the huge feature-film crews of Gregory Crewdson, but among many things that she shares with Crewdson is the determination that every detail of the print shall be fully her responsibility. There are no accidents in these pictures.

Fullerton-Batten, in spite of the daily bombardment of pictures of girls that we all take for granted, is dealing with a subject more usually dealt with in words or on film. A transitional phase, adolescence seems to demand a medium with time built into it. Yet knowing well that her pictures are not of individual moments, Fullerton-Batten has happily and brilliantly taken them on in a series of stills.

Sometimes she reminds me of the great Bernard Plossu, who has the gift of seeming to photograph the very moment when what you see shades into memory. But where Plossu is perpetually photographing on the point of departure, glancing behind him as he moves on, (and where ordinary snapshots take something which is not yet a memory and freeze it to be revisited later), Fullerton-Batten takes the memories and turns them into fully realized images. She admits cheerfully that a good part of her series on girlhood is from her own experience, as indeed how could it not be? But she is not remaking incidents or events.

She is exploring a state of mind which is interesting precisely because it does not know itself. Whether from social awkwardness or from sharp hormonal changes or simply from the kind of sensory overload that goes with the sheer volume of new things that teenage girls need to sort out, Fullerton-Batten’s girls are in perpetual instability. So the childish sprawled poses of one instant, flopped off the sofa or shamelessly handstanding so the skirt tumbles over one’s face, become the modest or coy poses of the next. Confidence and insecurity jostle each other in these pictures, but not always in the way we expect.

It’s not by any means clear that the young women are more certain of their place in the world and their power in it than the young girls. In Julia Fullerton-Batten’s world, childhood had its certainties. There is no single subject of these series (they’re far more complex than that) but every picture toys with the idea of self-consciousness. The models are normally strangers street-cast- for the purpose of the shoot. They are not professional models. Inevitably, they really are self-conscious. But they are also playing the parts of acutely self-conscious teenagers who sometimes lose their awareness of themselves in reverie or in fantasy. This is complicated and difficult. Fullerton-Batten works slowly, but she also has to be as quick as a kingfisher to spot their shifting moods as they progress through the shoot. Unlike most photographers working with most models, it is not their physique that she needs to capture, but something far more elusive. (...)

Occasionally, just occasionally, it works, even when there is still exploitation there. Nan Goldin at her best was as accurately elegiac about the painful verities of youth as anyone, and in another register entirely, Bernard Faucon seemed generous enough to give his own dreams to his subjects. Yet one needs to draw distinctions. There are straight-forward pictures of the subjects. There are properly autobiographical pictures in which photographer and subject are one and the same. And then there is the group into which Fullerton-Batten fits, where the people photographed are actors in the photographer’s own drama. The girls in these photographs are two things at once. They are (perfectly genuinely) young girls thrown into a strange environment and reacting to it. But they are at the same time the representatives of grown-up thoughts that are not their own but Fullerton-Batten’s about the changing state that they are in. In the contrast between those two roles lies the central tension of these pictures. (...)

Galerie Les filles du calvaire is pleased to present the solo exhibition of Laura Henno, Summer Crossing, after a noticed passing in Arles were she has been nominated Award winner Découverte des Rencontres de la Photographie 2007.

Anyone who ever witnessed a total eclipse remembers the disturbing and yet fascinating moment that precedes the darkness: animals fall silent and cease all movement, everything seems halted, hanging fire. Laura Henno's photographs trigger the same kind of feeling: the impression that time has been suspended, frozen; and that during this intervening period, human beings are delivered up to some invisible, mysterious force.

Here we see teenagers or very young people lost in their musings or suddenly immobilised by something out of our perception. They indubitably appear to us as characters from a narrative, but we will never know anything about their history, about what they are looking at or what they are thinking of. Sometimes we shall not even see their faces, when they turn their backs on us or are engulfed by darkness. Laura Henno's photographs are mostly built on pronounced chiaroscuro: the character is alone in the light while the surroundings are deliberately left in shadow. When the entire scene is lit, as in Freezing, in which an icy white pallor covers the landscape, there remains what we might call the "out of field mystery", the conviction that there is something there of which we know nothing, but which exerts an irresistible pull on the character.

These photographs are not portraits, and psychology is not their concern. Laura Henno's mises en scène place characters in meticulously chosen settings from which they seem indissociable: they give themselves up to their surroundings, letting themselves be aspirated and maybe engulfed by darkness or murky, viscous water. In these images, we sense the photographer's painstaking work with each model: finding just the right pose for the body, the right movement for a hand or a neck, the right expression in the eyes. And what in turn captures our eye is the tension of the character towards a presence which is invisible to our eyes.

The distinctiveness of these photographs doubtlessly reflects both Laura Henno's profound modesty and intense ambition: she makes no claim to capture the "soul" of a character in a "decisive moment", she rather succeeds in preserving the mystery of places and beings, because she transcends the trivial and knows what to leave obscure or unsaid.
Marie-Thérèse Champesme

Patricia & Marie-France Martin ruthlessly explore our sentiments and emotions, ceaselessly tracking and dissecting the human species and lifting the veil on its conscious and unconscious aspects – the double image here finds its full strength. The video, entitled Du noir dans le vert, was inspired by the cabin which artist Hans Op De Beeck developed in situ in 2001 for that same exhibition series. The work sits there like a drab observatory, with a view of two walnuts trees, lost in the middle of a vast, green meadow. One tree is alive, towering high above the caved-in remains of the other, dead tree. Around this almost romantic image, the Martins created a story of their own, and as usual the idea of duality plays an important role.

Two sisters are roaming around in a meadow, near two trees. They chop the dead tree to pieces and take the wood to a pool, deep in the surrounding forest. At night, in the moonlight, they dress in hermetical white costumes and paint the stump that is left over, as if this were part of some ritual. They are observed from the window of the cabin by a(nother?) woman. The video develops a multi-layered exploration of the space between the self and the other, the confusion between the genuine and the copy, between reality and fiction. Similarly to such directors as Lynch (Mulholland Drive), Bergman (Persona) and Hitchcock (Vertigo) they explore the concept of identity in their work, amidst an illusory world of reflections and fusions. The electro-acoustic soundtrack is by the Brussels' sound artist Arnaud Jacobs (Missfit).
Day after Day, Kunsthalle Fribourg, Fri-Art 2003-2007 (catalogue)
by Stoffel Debuysere, Argos festival Brussels, 2005 (catalogue)

« A short news item. On an electronic composition (made to measure): pace across an idyllic landscape (Swiss mountain air, Flemish light), measure the space between the walnut trees, juggle hypotheses, draw lines (in search of clues between the upright tree and the fallen one). Chop, separate, move (pieces of the dead walnut tree). Gaze at one’s reflection in a pond (favorable for apparitions; check that two and two make four? Mirror, mirror on the wall who is…). Step over barbed-wire (holding a basket from a fairy tale). Swap tops and bottoms (shirts and skirts, to confuse everything). Busy oneself around the fallen tree, wearing white overalls, splashing it in red (fake blood). Approach the window of the shed (it seems as though someone may be inside), be scared at the appearance of faces in the window (exact superimposition), run away in terror. Roam the countryside (legs immersed in dandelions, cuckoo-perched-bird-cuckoo-drowned-tree). Repeat (obsessively) pointless chores. Lose one’s bearings (trapped in fields, in the forest, in a charming spot). Fear (one-two lost faces). Do as if (minor drama).»