Play the story. His films, slide shows, and photographs all present various historical figures, real and make-believe alike: a politician, a freed slave, a drama coach, a lexicographer, a camera inventor, a philosopher, and the like. The artist chooses such figures for what their life experience reveals about issues running through the contemporary world. 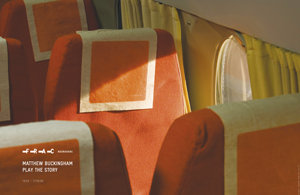 The FRAC Bourgogne -Burgundy Regional Contemporary Art Collection- is hosting the first solo show in France of the work of the American artist Matthew Buckingham (born in 1963 in Nevada, Iowa, USA). His films, slide shows, and photographs all present various historical figures, real and make-believe alike: a politician, a freed slave, a drama coach, a lexicographer, a camera inventor, a philosopher, and the like. The artist chooses such figures for what their life experience reveals about issues running through the contemporary world.

For this exhibition, titled Play the Story, he is presenting three video installations produced in 2007. They revisit the route taken by two women of importance in the feminist movement, as well as an influential episode of film history. As a fully-fledged historiographer, no less, Matthew Buckingham invites viewers to experience history and its constructive methods, as well as feel its closeness to the present.

“The past is never dead. It's not even past”, wrote William Faulkner. This oft-repeated quotation perfectly situates what he has been involved with since the mid-1990s: challenging the connection we have with history. Surprised by our understanding of history, as well as by the objectivity value we grant it, the artist re-interprets historical facts, the better to question the meaning of documents and images, and incorporate them on the basis of different viewpoints.

For Buckingham, each work is the springboard for nothing less than an historical investigation. He seeks out ancient sources as well as the way in which publications have reported the event in the course of history. He chooses situations which retain an extreme topicality. Matthew Buckingham’s work may be fuelled by an important theoretical basis, but it matters to him to come up with installations whose scope is based on textual experience as much as imagery and space. Understanding, representation, and physical experience are all worked in such a way as to lend substance to thoughts and events.

Three installations made in 2007 are brought together in this show: The Spirit and the Letter presents the writings of the novella writer, essayist and feminist Mary Wollstonecraft (1759-1797); Everything I Need imagines the thoughts of Charlotte Wolff (1897-1986), forerunner of gender theories and theories about homosexuality, during her flight back to Berlin in 1978, after 35 years of exile in England; and False Future links back up with the early cinematographic images shot by Louis Le Prince (1841-1890), French inventor of the camera, who mysteriously disappeared in a train between Dijon and Paris. In these three installations the artist makes use of the principle of spectator identification associated with different image arrangements, aimed at giving to each one of these situations a stronger actuality.

These three works well illustrate Matthew Buckingham’s approach and method, which also borrows from the historian, the archivist, the anthropologist and the detective. In his installations, the artist gives preference to the way the viewer negotiates between several sources and documents. He is interested by the encounter between work and viewer, leaving the latter a great deal of autonomy, running counter to the conveyance of a more unified sense. Each project seems comparable to the state of the beginning of his own research, when things crop up in a dispersed way, without any immediate coherence. By summoning up historiography within the exhibition venue, Matthew Buckingham recognizes in the exhibition’s form a capacity for honing the onlooker’s perceptions. ”Looking for forms of interdependence, analyzing contemporary problems by nearing their complex relationships in mind, this is perhaps a way of sidestepping cynicism and naivety.”[Conversation between Matthew Buckingham and Mark Godfrey: New York and London, February 2007”,in Matthew Buckingham Play the Story, Camden Arts Centre, (Londres – GB), Frac Bourgogne, (Dijon – France), Dundee Contemporary Arts (Dundee, Écosse - GB), Des Moines Art Centre (Des Moines - USA), Henry Art Gallery (Seattle - USA), 2007, vol.1, p.45].

Text by Claire Legrand, manager of the visitor’s department
Translated by Simon Pleasance

Supporting Bodies: This exhibition was produced with the support of the Ministry of Culture and Communication (DRAC: Regional Direction of Cultural Affairs of Burgundy), the Burgundy Regional Council and the Côte d'Or General Council.