A group exhibition featuring artists who use other people as a medium. The show contains works in a variety of media, including video and live performance - works which are often slippery in meaning or disquieting in effect. Participating artists: Pawel Althamer / Nowolipie Group, Phil Collins, Dora Garcia, Christoph Schlingensief, Barbara Visser, Donelle Woolford, Artur Zmijewski. Curated by Claire Bishop and Mark Sladen. 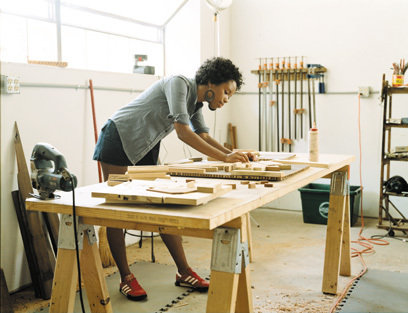 Double Agent is a group exhibition featuring artists who use other people as a medium. The show contains works in a variety of media, including video and live performance - works which are often slippery in meaning or disquieting in effect.

A number of the pieces in Double Agent explore the ethics of performance and representation. Christoph Schlingensief (www.schlingensief.com) presents a video installation using footage from his project The African Twin Towers, staged in Namibia using a group of non-professional performers. Artur Zmijewski exhibits a video of an art workshop in which he contrived a series of confrontations between groups of Christians, Jews, young socialists and Polish nationalists. Phil Collins shows a version of you'll never work in this town again, photographic portraits of curators, critics and other art world authorities invited by Collins to be photographed immediately after he has slapped them across the face.

Other works were made by, or feature, figures who operate as extensions for the artist. Paweł Althamer and the Nowolipie Group exhibit ceramic objects made by a class for adults with multiple sclerosis which Althamer has taught for 15 years. Barbara Visser shows a video installation employing footage of lectures in which she has cast actresses to appear as herself. A final pair of works brings a live component into the exhibition. Dora García exhibits Instant Narrative, which involves a writer staged within the gallery space. Joe Scanlan presents the up-and-coming artist Donelle Woolford, who at set times is using one of the ICA's upper galleries as a studio to construct her own sculptures.

All of the works in Double Agent raise questions of performance and authorship, and in particular the issues that arise when the artist is no longer the central agent in his or her own work, but operates through a range of individuals, communities and surrogates.

The exhibition has been curated by Claire Bishop (assistant professor of history of art at Warwick University) and Mark Sladen (director of exhibitions, ICA).

After the ICA Double Agent will be shown at Mead Gallery, Warwick Arts Centre (26 April – 28 June 2008), and Baltic Centre for Contemporary Art, Gateshead (21 May – 17 Aug 2008). At both of these venues the exhibition will be refreshed by new commissions that have been programmed locally.