Under Pain of Death 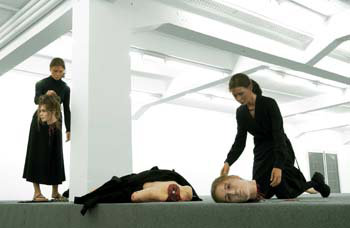 In 2006, 1,591 people were executed around the world. They were hanged, shot, beheaded, poisoned, or tortured to death. In China, the country where most executions were carried out, the bodies of delinquents were often used as organ banks. What some view as justified punishment for the protection of human beings and society, others consider an affront, a sin against humanity and creation or a violation of human rights. The question of the legitimacy and non-legitimacy of the death penalty – its history and practice from the electric chair to lynchings and vigilantism – has been dividing humanity from the very outset. It fascinates and disgusts people, including artists. The exhibition surveys the questions and answers explored by contemporary artists in connection with the death penalty as an existentialist phenomenon involving human feelings ranging between fear, hate, anger, revenge, shame, forgiveness, and mercy.


Sanctioned Killings, and the Very Many That Aren't

One problem is that some of the works selected by the curators, Gerald Matt and Abraham Orden, are not clearly on topic. Andres Serrano's portrait of a hooded Klansman might call to mind lynching, and Steven Cohen's spike-heeled platform sandals with real human skulls as part of their soles might evoke human sacrifice. If you think of the Unabomber as a kind of self-appointed executioner, then Constanze Ruhm's ghostly color photograph of his cabin qualifies. But you have to stretch to make these connections.

Is Artur Zmijewski's short film showing a group of naked people playing tag in the dank gas chamber of a former Nazi concentration camp about capital punishment? Maybe, if you broaden - and confuse - the concept enough. Barnaby Furnas's painting "The Execution of John Brown" is more about the civil war between abstraction and representation than about the death penalty.

Most of the works that explicitly address capital punishment do so in a dry, cerebrally distanced way. Mary Ellen Carroll offers a bag filled with her own weight in sand, for example, to represent the practice of using sandbags to test gallows.

Andy Warhol's screen print of an electric chair has a mordant poetry, and Lucinda Devlin's glossy photographs of execution chambers in American prisons are coolly mysterious, but both artists' works are extremely reticent. A full-size electric chair made of Legos by Manfred Erjautz suggests that we need a moratorium on building electric-chair sculptures out of unlikely materials.

Ken Gonzales-Day presents a selection of antique photographic postcards depicting lynchings attended by festive crowds. He has erased the victim from each card as a way to symbolize collective amnesia. (One of his altered cards has been blown up into a stylishly lugubrious, wall-to-wall photo-mural.) Though effectively pointed on its own, in the context of this exhibition that erasure seems the sign of a broader reluctance to imagine more fully what capital punishment is all about.

But some works point in potentially fruitful directions. In a Halloweenlike tableau by Mathilde ter Heijne, three identical women dressed in black stand on a raised white stage, one holding a fourth's severed head by the hair. On the corner of the platform lies the cut-off head of yet another sister and a severed arm.

As a kind of waxworks horror show, Ms. ter Heijne's work is only momentarily diverting, but a wall label gives pause for reflection. It explains that the stage is meant to recall a time when human sacrifices were presented as public spectacles, and it suggests that such displays gave rise to modern tragic theater.

What if, rather than tiptoeing around the theme, artists were to explore unflinchingly how we fantasize, consciously and unconsciously, about punitive killing? Who, after all, has not imagined subjecting a heinous criminal to some horrific retribution?

Adam McEwen's enlarged and inverted copy of the famous photograph of Mussolini and his girlfriend hung upside-down for public viewing after their execution is too trendy as appropriation art, but it vividly illustrates the primal joy in extreme revenge that persists in modern times.

Harun Farocki's artfully composed 20-minute video "I Thought I Was Seeing Convicts" is made up mainly of surveillance tapes from a high-tech grocery store and a maximum security prison in California. While explaining modern forms of crowd control, it reveals that prison guards liked to put prisoners they knew would fight into the exercise yard together and bet on outcomes. Sometimes the prisoners would be shot and killed by guards trying to stop the fighting. One riveting passage shows exactly that happening in jerky, stop-action slow motion.

"The Last Supper," by Mats Bigert and Lars Bergström, an Errol Morris-style documentary about condemned prisoners' final meals, asks the question: Why go to the trouble of making a special dinner for someone you're going to kill? The film includes interviews with a former inmate from Huntsville State Prison in Texas who had the job of preparing last meals, a former Bangkok prison warden and a man who spent seven years on death row in South Africa. It comes to no conclusions, but it evokes a rich mix of ideas, including the intriguing notion of the last supper as a vestige of ancient rituals of human sacrifice.

The most provocative works in this exhibition invite us to wonder whether we have really outgrown ancient tendencies to find not only entertainment, but also transcendental meaning, in officially sanctioned killing. We don't need an art exhibition to tell us what we ought to think about legalized murder. But one that fearlessly delved into the psychic muck underlying common, socially approved ideas about it could be illuminating.