Sound. Four positions were chosen in a multi-staged procedure for the exhibition tour. The spectrum ranges from sound art and sound installations to videos in which the subject plays an essential role. Partecipatins artists: Astrid Nippoldt, Nico Dockx, Marcellvs L. With and many others. 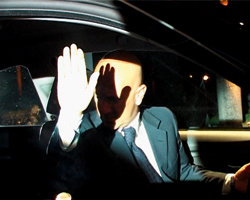 The Cultural Circle of the German Economy in the Federal Association of German Industry awards the “ars viva” art prize in conjunction with an exhibition series since 1953 that has established itself as one of the most important art prizes in the Federal Republic of Germany. Accordingly, the list of previous prize winners ranging from Gerhard Merz, Rosemarie Trockel, and Olaf Metzel to Albert Oehlen, Amelie von Wulffen, and Wolfgang Tillmans reads like a who’s who of the contemporary art scene. The series thanks its special quality to thematic emphases that each engages in topical and aesthetic discussions, for example questions dealing with “time” or “identity.” By deciding on the subject matter of “sound,” the Cultural Circle responds its growing importance in contemporary art.

Four positions were chosen in a multi-staged procedure for the exhibition tour. The spectrum ranges from sound art and sound installations to videos in which the subject plays an essential role. Florian Hecker is “on the search for new sounds and unheard structures” (Hecker) with his psychoacoustic “Sound Pieces” that are precisely positioned in the space. Nico Dockx is also active in the field of pure sonoric structures. But he primarily constructs his often performative sound installations out of found sound material which he expands into room filling collages through sampling. Sound plays a central role on a par with the images in the films and videos by Astrid Nippoldt and Marcellvs L. With the help of sounds, the physical presence of the images in the space is alternately heightened and pictorial statements are commented upon or contrapuntally mirrored. “Tracks can be changed through sound," is how Astrid Nippoldt describes her method of employing sounds within the broken narrative of her film sequences. In this cooperation, the Kunstverein Hannover links onto the “ars viva 93/94” presentation devoted to the subject matter “Sculpture, for example” in which works by Iris Häussler, Leni Hoffmann, Eran Schaerf, Pia Stadtbäumer, Ute Weiss-Leder were exhibited. “Sound” was organised in close cooperation with the Museum Morsboich in Leverkusen and the Contemporary Art Center in Vilnius.

guided tour: each sunday at 3 pm and after telephone arrangement
talking labels: assistants from Kunstverein answere your question
about the exibition each sunday at 4 pm to 5 pm each wednesday from 5 pm to 7 pm