Toward a Sustainable Art 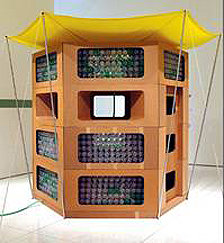 iCI announces the tour of Slightly Unbalanced, an exhibition of works by artists who have focused on neurosis of various kinds in their work, using themselves and the people around them as fodder for their investigations. During the past fifteen years, inspired by the work of several prominent older artists, a younger generation has expanded the contemporary art vocabulary to encompass a subject that is now well known to the general public. The exhibition brings together 35 works by 18 artists or artists’ groups who make use of psychology as a kind of lingua franca—we all know what the symptoms of neurosis are, if not the particular diagnoses.

Curated by iCI’s director of exhibitions, Susan Hapgood, Slightly Unbalanced premiered at the Chicago Cultural Center, Chicago, Illinois, on January 26, 2008, and continues there through April 13, 2008. The exhibition travels through December 2009 and will also be hosted by the Huntington Museum of Art, Huntington, West Virginia (March 13 – May 24, 2009) and the Paul and Lulu Hilliard University Art Museum in Lafayette, Louisiana (September 18, 2009 – December 31, 2009). Additional venues will be announced.

The exhibition spans four distinct thematic sections. The first one features several artists (Louise Bourgeois, Bruce Nauman, Cindy Sherman, Mike Kelley, and Sophie Calle) who have introduced psychological imagery and content into recent art, building a foundation of artistic possibilities. The second section coalesces around artists who play a performative role in their own videos; most of these explore the cultural stereotype of the narcissistic creative persona, such as the idiosyncratic, manipulative character named “Lois” in Harry Dodge and Stanya Kahn’s work Winner. The third section focuses on diaristic or confessional formats, as if the viewer were bearing witness to different individuals’ inner monologues, or reading their diary entries. The last section, which includes several sculptural installations, explores the house as a fertile metaphor for the mind—the domestic interior as a stand-in for the psyche.

The field of psychology is 150 years old, and many of its basic concepts and terminology are embedded in our presuppositions about how people think and act, what drives and motivates us. The artists whose works are presented in Slightly Unbalanced, in choosing to concentrate on neurosis, have tapped into a charged theme that provokes a range of responses, including discomfort, recognition, empathy, and humor. Their development of psychologically loaded subject matter provides a deeply enriched vocabulary for contemporary art.

The illustrated, 72-page exhibition catalogue includes an essay by curator Susan Hapgood, a text by Susan M. Andersen, Professor of Psychology, New York University, and brief statements by the artists. The catalogue is published by iCI and distributed by D.A.P.

Slightly Unbalanced is a traveling exhibition organized and circulated by iCI (Independent Curators International), New York. The exhibition, tour, and catalogue are made possible, in part, by the Horace W. Goldsmith Foundation, the iCI Advocates, and the iCI Partners.