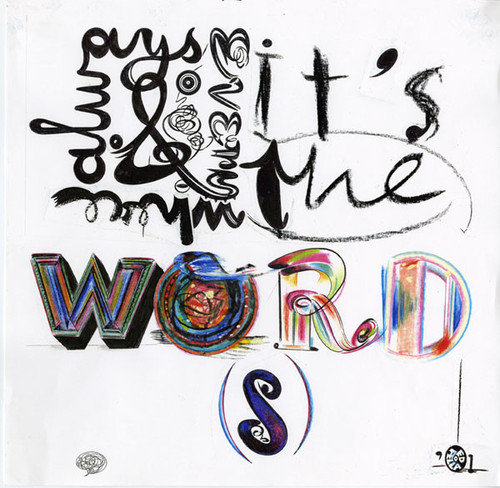 The practices of Los Angeles-based graphic designers Ed Fella and Geoff McFetridge explore the tenuous relationship between visual art and independent graphic design in two very different generations. Fella has taught design at the California Institute of the Arts for over 20 years. His illustrations, photographs, and typographic experiments, have long served as vehicles for his philosophical musings on art, design, literature, and typography. McFetridge, a CalArts alumnus, has worked on a range of commercial and independent projects: designing billboards, skateboards, toys, wallpaper, and even a shoe for Nike.. He has exhibited both nationally and internationally as a designer and artist.

Ed Fella practiced professionally as a commercial artist in Detroit for 30 years before receiving his MFA in Design from the Cranbrook Academy of Art in 1987. He has since devoted his time to teaching and his own unique self-published work, which has appeared in many design publications and anthologies. In 1997 he received the Chrysler Award and in 1999 an honorary doctorate from CCS in Detroit. His work is in the collections of the National Design Museum, New York and the Museum of Modern Art, New York. Fella is the recipient of the 2007 AIGA Medal.

Originally from Canada, Geoff McFetridge came to California to earn his MFA in Graphic Design at CalArts. His thesis project Chinatown won a distinctive merit award from ID magazine. While working as art director for Grand Royal Magazine (1995-1997), McFetridge founded his own design studio, Champion Graphics. He has had solo shows at galleries around the world including Parco Gallery, Tokyo and Colette, Paris. His work is in the permanent collection of the San Francisco Museum of Modern Art.

This exhibition is conceived and organized by Michael Worthington, an award-winning graphic designer, faculty member of CalArts’ School of Art, and alumnus of the CalArts Program in Graphic Design. The exhibition is accompanied by a color catalogue designed by Worthington.

This exhibition is made possible in part by Everloving and Feal Mor and 2K by Gingham.