Divided into five thematic sections, the exhibition looks into the way the Surrealists embraced the world of design and the way designers used Surrealism as a source of inspiration. A unique view of some of the most unusual objects created by the movement's leading figures, including Salvador Dali', Rene' Magritte, Joan Miro', Giorgio de Chirico, Jean-Michel Frank, Frederick Kiesler, and Max Ernst. Curated by Ghislaine Wood. 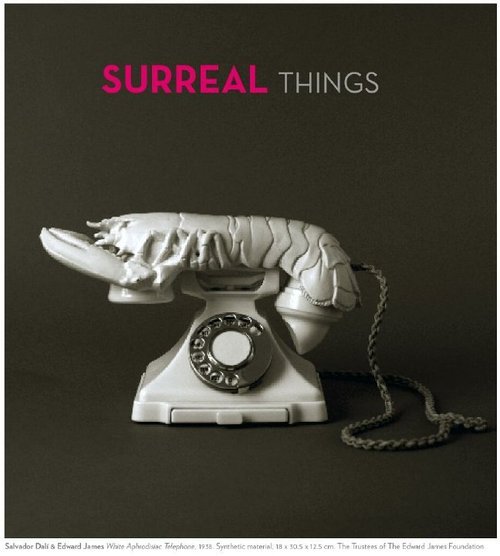 • Organized by the Victoria & Albert Museum, London, and co-produced by the Guggenheim Museum Bilbao, the exhibition brings together some 250 objects to explore, for the first time, the Surrealist movement’s influence on design, painting, theater, interior design, furniture, fashion, films, advertising and architecture.

• Divided into five thematic sections, the exhibition looks into the way the Surrealists embraced the world of design and the way designers used Surrealism as a source of inspiration.

• A unique view of some of the most unusual objects created by the movement’s leading figures, including Salvador Dalí, René Magritte, Joan Miró, Giorgio de Chirico, Elsa Schiaparelli, Jean-Michel Frank, Frederick Kiesler, and Max Ernst, many of which are on show for the first time.

This winter the Guggenheim Museum Bilbao presents one o f the most important temporary exhibitions of 2008: Surreal Things. Sponsored by BBVA, the exhibition is the first show to explore the influence of one of the 20th century’s leading movements on the world of design, including theater, interior design, fashion, film, architecture, furniture, and advertising.

Organized by London’s Victoria & Albert Museum, Surreal Things includes some 250 objects from public and private collections the world over. Some objects are on display to the general public for the first time. The exhibition comes to the Guggenheim Museum Bilbao, co-producer of the show, after major successes with public and critics alike at the two previous venues, the Victoria & Albert Museum itself and the Museum Boijmans Van Beuningen in Rotterdam.

A setting specially designed for Bilbao by London-based architects Metaphor, and inspired by the Surrealists’ own stunningly exciting mise-en-scènes, will transform the entire third floor of Frank Gehry’s building. Against this spectacular backdrop, visitors will be able to see how the last century’s most influential avant-garde art movement actually developed from its beginnings in the political ideology of Karl Marx and the psychoanalysis of Sigmund Freud. The highly unusual, and often very familiar objects on display are by some of the movement’s leading figures, including Salvador Dalí, René Magritte, Jean Arp, Joan Miró, Giorgio de Chirico, Isamu Noguchi, Eileen Agar, Jean Michel Frank, Frederick Kiesler, and Max Ernst.

Divided into five theme-based sections, called “The Ballet”, “Surrealism and the Object”, “Nature made Strange”, “Displaying the Body” and “The Illusory Interior”, Surreal Things highlights the evolution of Surrealism from its beginnings as a politically radical avant-garde art movement to its transformation into a worldwide cultural phenomenon which, in just a single decade, revolutionized the world of art, design, fashion, advertising, jewelry, photography, the movies, and the decorative arts and which, even today, continues to exert a good deal of influence on many fields of artistic and cultural endeavor.

Salvador Dalí, one of the movement’s most controversial artists, generated no little tension with the original Surrealist group through his commitment to the world of objects and commerce. Dalí summed up his desire to create objects thus: “I try to create fantastic things, magical things, things like in a dream. The world needs more fantasy. Our civilization is too mechanical. We can make the fantastic real, transforming it into something more real than what really exists.”

But Dalí was not the only artist criticized by others in the movement for his relation with the world of commerce. When Joan Miró and Max Ernst created a series of stage settings and costume designs for the Russian Ballet, André Breton, the movement’s founder, and one of the most intransigent defenders of the original Surrealist spirit as an aesthetic movement using automatic techniques to reflect the dream world, launched a ferocious attack.

Another of the figures responsible for the ideological dissemination of the movement was British millionaire Edward James, patron of both Magritte and Dalí, who turned his home, Monkton House, into an authentic Surrealist dream and was involved in the creation of some major Surrealist legacies, including Mae West’s lips sofa, the lobster telephones and almost certainly the rose-glove tea set, all of which became part of the decor of this most unusual studio.

To show how, despite these discrepancies, most of the artists associated with Surrealism also worked in other media, the exhibition presents, together with paintings by artists like René Magritte, Max Ernst, Salvador Dalí and Yves Tanguy, some objects that have become genuine icons of the movement: from Dalí’s Mae West Lips Sofa (1938) to his Lobster Telephone (Téléphone-Homard, 1938), not forgetting the creations of inspired fashion designer Elsa Schiaparelli, including her Tear o Skeleton dresses (both from 1938), or Meret Oppenheim’s recently discovered Table with Bird’s Legs (Tisch mit Vogelfüssen, from 1939). Other outstanding exhibits in Surreal Things include Giorgio de Chirico’s costume designs and stage settings for Diaghilev’s Le Bal (1929), Dalí’s 1963/64 creation Venus de Milo with Drawers (Venus de Milo aux Tiroirs , 1936/64), Oscar Dominguez’s Wheelbarrow (Brouette , c. 1937), the recently discovered Surrealist cage, by Jean-Michel Frank for Elsa Schiaparelli’s boutique in the Place Vendôme in Paris (1937) or Max Ernst’s Bed-cage with Screen (Lit-Cage et son Paravent, 1974).

As exhibition curator and curator of the Victoria and Albert Museum Ghislaine Wood commented at the opening of the exhibition in London: “The Surrealist movement produced some of the most visually intriguing objects of the 20th century. It gripped the public imagination and has retained its hold ever since.”

At the Guggenheim Museum Bilbao, the exhibition’s third world venue, Surreal Things will be paying special tribute to the legacy of two of the movement’s leading figures. One is Salvador Dalí, whose prolific output is given pride of place throughout the exhibition, with some thirty works included. The other is Peggy Guggenheim, who over the years put together one of the major collections of Surrealist art, presented in 1942 in the museum/gallery called Art of This Century, at the very heart of the New York vanguard. Also included in the exhibition is a scale model of this remarkable venue, designed by visionary architect Frederick Kiesler. Peggy Guggenheim’s personal collection, complete with some major Surrealist works, has been an integral part of the permanent Collections of the Guggenheim Museums since the 1970s, being on show in a Venetian palace which first opened its doors to the public in 1951.

Surreal Things provides a historical context for the most outstanding Surrealist exhibitions and events. An educational area, conceived as a complement for the exhibition, will contextualize and describe the movement’s history through texts and educational pictures. Didaktika will also offer visitors an interactive site where they will find the key works of Surrealism, a selection of musical pieces related to the movement, and original audio files with first-hand accounts of some of the most representative Surreal artists such as André Bretón, Man Ray, Salvador Dalí, and Tristan Tzara. Finally, a workshop area will allow visitors to learn the creative processes and techniques most frequently used by these artists in their works. A collective “exquisite corpse” game, created and made popular by members of the Surrealist movement after an old living room pastime, completes this didactic space.

Guggenheim Museum
Avenida Abandoibarra, 2 48001 Bilbao Spain
Hours of operation
Tuesday to Sunday: from 10 am to 08 pm
Monday: July and August from 10 am to 8 pm; closed the rest of the year.
The Museum will be closed on December 25 and January 1. On December 24 and 31 the Museum will close at 5 pm.
The ticket office closes half an hour before museum closing time. Visitors will be asked to begin leaving the galleries 15 minutes before closing time.