The boys are back in town 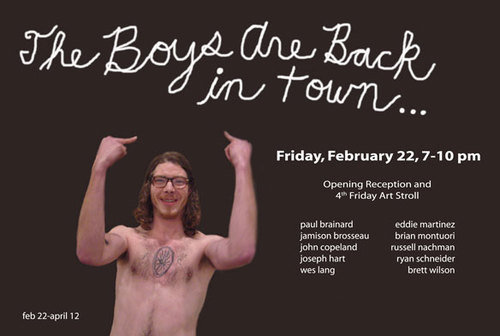 Paul Brainard
In Paul Brainard's paintings and drawings compositional elements refer simultaneously to deep space and surface arrangement. This formal device reflects the position of one’s reality, the gulf between where one exists in their mind as opposed to the reality of one’s existence. The images reflect the artist's position in a media saturated consumerist society, combing elements of random advertising, personal photographs and religious imagery. Icons from early puritan New England gravestones mingle with images of pornography and homogenized culture. Time is compressed; forms overlap and eradicate one another. Random figures exist in a semi-abstracted environment to which they cannot relate. Both abstraction and representation push and pull off of one another to develop a dynamic within the works that captures the void of substance in everyday life. The emotional despair in Brainard's work stems from a distinct lack of spirituality that is very representative of today’s society. Each piece evolves as Brainard follows intuition and by altering the image through elimination, embellishment or eradication. The process is one by which intuitive discoveries lead in new directions in the piece, preserving a feeling of spontaneity in the final image.
Brainard was born in Pittsburgh, Pennsylvania and now lives and works in Brooklyn, New York. Brainard earned his BA in Studio Art at the University of Pittsburgh and his MFA in Painting at Pratt Institute. He also studied at the Carnegie Museum of Art Studio School and has exhibited throughout New York.

jamison brosseau
Jamison Brosseau was born in 1976 in Iowa. He did his undergraduate work at the University of Iowa and received his masters from Rhode Island School of Design. He has shown his work in Iowa, New York and Providence. He has upcoming shows in Philadelphia and Minneapolis. He will be showing paintings and drawings. Brosseau’s sketchbooks were a favorite at the Sketchbook: As Concept, Process, and Finished Project at Delta Axis @ Marshall Arts in 1999.

john copeland
John Copeland received his BFA from California College of Arts and Craft in 1998. In Copeland’s hands, mortality, physicality, and a past that seems to be shadowing us take form in a manner that is fluid, fleeting, and at the same time, meaty, undeniably present. His liquid style and muted palette create a contradictory sense of reality and irreality within each canvas. Skulls, rabbits and rope all figure in his work, as do war and cartoons; in an interview on fecalface.com , he explains, “How we get along or don’t, social issues, conflict, how we manage to keep going, this crazy place we live in, are all things that I’m trying to talk about. Trying to laugh, have fun and move ahead with it, let things evolve.”
Copeland’s work was included in the group show “We are near,” curated by Eddie Martinez at Allston Skirt Gallery in April 2007, in “Are You Having a Good Time?” at Galerie de Meerse in the Netherlands, October 2007, and “Undercurrents” at 31 Grand, Brooklyn in Spring 2006. He currently lives and works in New York

joseph hart
Originally from New Hampshire, Joseph Hart currently lives and works in Brooklyn, New York. His mixed media works on paper (and panel) investigate the exchanges between belief and value systems, and how these ideologies relate to tradition, influence, economics, power and control. His work has recently been exhibited at The Bronx Museum of the Arts, Galleri LOYAL in Stockholm, Galerie Vidal Saint-Phalle in Paris, Galerie Markus Winter in Berlin and Freight & Volume Gallery in New York.

wes lang
Though early U.S. expansion provides the most obvious references, Wes Lang's work equally reflects his personal history. His sources range from the Bible to Johnny Cash to Walt Whitman to his own grandfather, a cigarette salesman. The artist has long fused ancient stories with those of his own and combined the antique and the kitsch with contemporary aesthetics. More broadly, Lang's work resonates as a raw and instinctual search for guidance through a world constantly plagued by issues of war, prejudice, and hatred.
Lang has been obsessed with the culture, imagery, and idealism of the American Indians since he was a child. As a young artist, he began tattooing their iconography on his own body in a further attempt to connect with this culture. Symbols of Americana and the Wild West have served as equal fascination for the artist, and he brings together a love of his country and history. At the same time, he has referenced a delicate moment that attempted to destroy a race and its culture.
About the personal aspects of his work, Lang has stated "It is an autobiographical journal, using American Indians, birds, song lyrics, trees, houses, etc. and turning each of them into reflections of myself. A bird on a branch is just as much me as is an ancient Medicine Man. We are all coming from the same, wondrous place, a world we can't control, but we try to make sense out of it while we are blessed with the chance."

eddie martinez
Eddie Martinez’s drawings and paintings are assemblages of reoccurring characters, objects, and motifs that loosely recreate everyday life into chaotic and exhilarating events. Interiors may feature peaked, colorfully shingled roofs, while landscapes are littered with potted plants and bowls of fruit. Those objects may also appear in more straightforward still life paintings that pulsate with the energy of modern masters of the genre, such as Marsden Hartley. Though his style is unabashedly untrained, a wide range of comparisons from Picasso to comics to folk art assert themselves. Martinez’s practice of constant drawing, an obsessive recording of life, provides his oeuvre’s foundation, one characterized by a vibrancy and energy that can barely be contained. The paintings substantiate his visions in expanded scale and palette. For all, his process is instinctual, idiosyncratic, and self-assured, professing an outlook that is at turns genuine, optimistic, and hilarious.
Martinez has had solo exhibitions at ZieherSmith in New York and Galleri Loyal in Stockholm Sweden. Since 2002 Martinez has also exhibited extensively in group exhibitions in New York, Boston, Texas and throughout Europe.

brian montuori
Brian Montuori uses the tranquility and beauty of classical landscape painting as a perfect stage to present tragic scenes of disorder and chaos and typically depicts animals in hyperbolically perilous scenarios. Painted with a deft variation of styles which he conducts seamlessly, Montuori breaks from tradition, finding new techniques to portray the active motion. Montuori describes the exquisite agony of an explosion of fire and carnage while also maintaining an intangible humor which penetrates the despair.
Born in 1977, Brian Montuori lives and works in New York. Montuori has completed a solo exhibition at Christian Ehrentraut in Berlin, Germany where he presented a wall sized painting of his representation of Noah’s Ark gone asunder. This piece was recently acquired by Sammlung Essl in Vienna, Austria.

russell nachman
Combining personal and cultural history, Russell Nachman's work is a meditation on utopian dreams. Growing up in the 1970s Nachman witnessed the decay of 1960s idealism where thoughts of social change, alternative beliefs, and cultural experimentation gave way to feelings of lost desperation. The aesthetics and period characterizations, as well as the knowledge that the hippie utopian had failed, greatly influenced him. "The world I saw was a baroque, childlike vision of dystopia that I constructed as utopia - as if loss and disappointment were somehow integral parts of happiness."
Russell Nachman (lives Brooklyn, New York) received his MFA from the San Francisco Art Institute in 1996 and his BFA from Colorado State University in 1990. His most recent solo exhibition Trad, Gras och Stenar earlier this year was held at Jack the Pelican, Brooklyn, NY. Additionally Nachman has exhibited in cities such as New York, Los Angeles, Philadelphia, San Francisco, and Cleveland. Reviews of his work have been included in New York Arts, New York Times, Time Out New York, Art in America, San Francisco Weekly, and Art Issues.

ryan schneider
Intimate and affecting, Schneider's paintings render powerful manifestations of emotion that range from diabolical affection to quiet connectivity. For Schneider, painting is a physical and dynamic process that develops organically upon the surface of the canvas. Crafting forms from thick paint — he gradually formulates and juxtaposes layers of vibrant patterns, dominant figures, and spatial attributes ultimately constructing the illusion of space. While he draws upon inspirations such as Pierre Bonnard, Henri Matisse and Francis Bacon, the resulting compositions are entirely intuitive and genuinely subjective. In a unique and candid language, Schneider thus reflects the emotional imprints that past interactions have left upon him.
Although not wholly biographical, his paintings function as a depository for fractions of knowledge and experiences Schneider has acquired. His works communicate private moments filled with intensity and significance, in turn situating the viewer in a voyeuristic stance.
Ryan Schneider was born in Indianapolis, IN and currently lives and works in New York. He holds a BFA from the Maryland Institute College of Art, Baltimore. He has previously exhibited in numerous group shows in the US, and has independently published several poetry anthologies.

brett wilson
Brett Wilson does what few others dare to do when he takes the craft of painting at face value, making naive oil paintings that use a sharp wit to convey meaning. Since life is so fragile it should be taken with the best of humor, Wilson reminds us.