Illusion, Reality, and the Moving Image 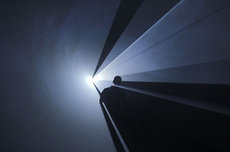 The Hirshhorn presents an unprecedented two-part exploration of contemporary moving-image art that focuses on the ways in which the cinematic has blurred distinctions between illusion and reality. "The Cinema Effect" includes film, video and digital works by a range of influential and emerging international artists. Organized by acting director and chief curator Kerry Brougher and associate curator Kelly Gordon, part one of "The Cinema Effect" exhibition, "Dreams," addresses film’s ability to transport viewers out of their everyday lives and into states that lie between wakefulness and sleep, sending them on journeys into the darker recesses of the imagination. "Dreams" is on view from Feb. 14 to May 11. The second part of the exhibition, "Realisms," is organized by curator Anne Ellegood and associate curator Kristen Hileman. It explores the irony that in an age when documenting "real life" in moving image formats becomes ever easier, the line between fact and fiction is increasingly complicated. "Realisms" is on view from June 19 to Sept. 7.

"Today, the cinema is everywhere," explains Brougher. "It is on television, your computer screen, projected onto buildings, and carried around with you on your iPod. The cinematic is in the way we perceive the world, in the way we speak, in the way we dream. We have no need to enter a movie theater to escape into an illusory world; life itself is just like a movie."

To illustrate this phenomenon, the artists in "The Cinema Effect" appropriate vocabularies and techniques from feature films, news broadcasts, reality TV shows, video games, "manga" comics, music videos, surveillance systems and the Internet. Following tracks laid down by cinema’s earliest pioneers at the end of the 19th century—the escapist, magical films of George Méliès ("Dreams") and the documentary work of the Lumière brothers ("Realisms"), the two exhibitions explore the idea that, in contemporary culture, whether something resembles fact or fiction, it remains difficult to determined reality from illusion.

Influential figures such as Warhol and Conner created work that first raised many of the questions explored in this exhibition and signaled the collapsing boundaries between art and popular culture. Film and video installations by Dean, Gordon, Graham, Hill, Huyghe, Islam and McQueen dismantle the film machine and the psychological nature of cinema.

Propelling the art of the moving image forward is a spectrum of emerging artists who work with film and video, as well as with digital technology. These artists rely on a range of methods and varying intents to engage with and transform elements of contemporary culture. Deller restages the clash between police and striking workers at Orgreave in collaboration with director Mike Figgis for British television. Ezawa turns broadcast footage from the O.J. Simpson trial into animation. McCall projects digitally created geometric images through vapor. Breitz appropriates feature film footage for her commentary on gender roles in society. Vezzoli fictionalizes his own life in the style of an "E! True Hollywood Story," and Staehle creates a mesmerizing video of Niagara Falls that suggests real-time Internet streaming.

Dreams
"Dreams" presents a series of artist’s installations that move viewers through different stages of consciousness, ranging from hypnagogic moments between wakefulness and sleep that act as a passageway to the dream world (Douglas, Graham, Gordon, Versteeg and Warhol) to the darker recesses of the imagination reached during deep sleep (Almond, Girardet, Hill, McQueen, Oursler) onward to a return to consciousness and, perhaps, the real world (Aoshima, Bell-Smith, Dean, Farocki, Hubbard/Birchler, Olde Wolbers, Richardson, Staehle). Many of these works also reflect on the ways that cinema works to suspend disbelief, turning illusion into something seemingly real. In the installation, the visitor moves through a kind of dark ride or labyrinth of chambers that encompass the entire second level of the museum. Along the way viewers may abandon the sensibilities that drive waking hours—the urgency of time and the distinct dimensions of space—and become "lost" in a 3-D dreamscape.

Related Programs
Throughout the eight-month presentation, several artists will participate in Meet the Artist talks: Oursler (Feb. 14), Hubbard/Birchler (March 27), Julien (June 19) and Breitz (June 26). Lectures by Brougher (Feb. 23) and architectural historian Deitrich Neumann (April 12) explore aspects of the exhibition in depth. Hands-on activities for youth and families (beginning Feb. 23) and interactive Friday gallery talks offer a range of educational experiences designed to engage people of all ages and interest levels in contemporary art. After Hours (April 4 and June 20) evening events offer extended hours to view the exhibition (8 p.m. to midnight) and enjoy content-based programming, music and tours in a late-night social setting that attracts large numbers of attendees from around the Washington, D.C.-area. The museum’s ever-expanding library of Podcasts (featured on iTunes in the top 100 Arts and Entertainment Podcasts) make walkthroughs and interviews with artists accessible internationally.

Catalog
The fully illustrated catalog includes essays by Hirshhorn curators Brougher, Ellegood, Gordon and Hileman, as well as a chronology of cinema by artist Tony Oursler. The catalogue is co-published with D Giles Ltd, London, a fine arts publisher, and distributed worldwide.

Image: Still from Anthony McCall's, You and I Horizontal, 2005, courtesy of the artist.

About the Hirshhorn Museum and Sculpture Garden
The Hirshhorn Museum and Sculpture Garden, the Smithsonian’s museum of international modern and contemporary art, has some 11,500 paintings, sculptures, mixed media installations and works on paper in its collection. The Hirshhorn maintains an active and diverse exhibition program and offers an array of free public programs that explore the art of our time.
The museum, located at Independence Avenue and Seventh Street, S.W. is open daily from 10 a.m. to 5:30 p.m. (closed Dec. 25), and admission is free.