The Cult of Personality

Portraits and mass culture. The show attempts to locate the manner in which the development of an identity for mass consumption adopts the traditional viewer/subject relationship, often with the expectation that viewer will "lose themselves" in the protectiveness or superiority of the subject while finding momentary fulfillment in a distraction from what they are meant to feel that they lack. 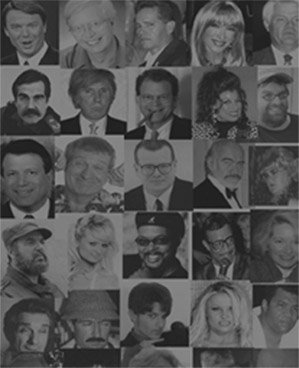 “Someone said that Brecht wanted everybody to think alike. I want everybody to think alike. But Brecht wanted to do it through Communism, in a way. Russia is doing it under government. It’s happening here all by itself without being under a strict government; so if it’s working without trying, why can’t it work without being Communist? Everybody looks alike and acts alike, and we’re getting more and more that way.”
Andy Warhol

Unlike the crude forms of thought control and idolatry found in Stalinist Russia and present day North Korea, the American media’s presentation of its leaders is predicated on the notion of a free press and an open exchange of ideas. In practice, the ideal of the public airwaves is currently suffering under the weight of media consolidation by a few corporate entities whose agendas are often expressed by omission rather than outright suppression (witness the exclusion of certain candidates from recent network sponsored debates). The dilemma for those (government or private interests) who wish to influence public opinion within democracies is that, unlike totalitarian systems, they do not have the option of force.

Persuasion, seduction, and manipulation are often employed as part of a phenomenon known as “soft power”, a seemingly benign means of governmental influence on mass media whereby a democratic citizen’s position is more or less co-opted through overwhelming saturation of “preferred” information. The influence on mass sentiment by public relations firms, lobbyists and the frequently used “anonymous” sources within the news, when taken as a whole, is often dismissed as conspiratorial. But when considered in practical terms (success or failure), the effectiveness of a democratic government’s use of mass media to convince the public, for example, that it is in their best interest to go to war, recent history has proven these methods to be extremely reliable.

Any plausible narrative requires characters, and the role that personality plays in developing the story line is significant. The process of crafting present-day myths to be served up for the purpose of turning the news into entertainment requires some belief in charismatic personalities. While the concept of a “cult of personality” is most often associated with autocratic leaders who use mass media to develop and sustain their “popularity” in an undemocratic state, the sphere of influence enjoyed by the media within a democratic system, and recent cases of its manipulation by government, suggest that this concept is ready for an expanded definition.

In adopting the genre of portraiture, a form associated with traditional identity construction which focuses on the relative psychological interest of the subject, “The Cult of Personality/Portraits and Mass Culture” attempts to locate the manner in which the development of an identity for mass consumption adopts the traditional viewer/subject relationship, often with the expectation that viewer will “lose themselves” in the protectiveness or superiority of the subject while finding momentary fulfillment in a distraction from what they are meant to feel that they lack. Depending on whether the goal is to make the subject appear “familiar” or “in charge”, remnants of various types of portraiture, from the snapshot to the honorific, are often visible in the fabricated image of a politician or celebrity. The seductive chemistry of personality cults also relies heavily on an element of a “suspension of disbelief” characteristic of all good theatre. The audience both wills these heroes into being, and is carried away by their stage-managed charisma.

In the run up to an election which is mercifully overshadowing our current leader’s long, slow decline in popularity, the mechanisms through which personality can trump reason in the public sphere might be worth revisiting, if only as a reminder of the very real consequences of allowing fictions to displace facts.