New from Mount Analogue: the exhibition may be read as a homage to Julius Koller and his utopian vision. More than 30 pieces provide a survey of invisible subjective Utopian or fictional spaces that can nevertheless be shared or inhabited by our own thoughts. Included are works by Robert Barry, Felix Gonzalez-Torres, Douglas Gordon, Nam June Paik, Michelangelo Pistoletto, Tobias Rehberger, Ed Ruscha. Jean-Pascal Flavien: over 60 drawings, models and films from Viewer, a fictional yet functional architectural structure recently completed in Brazil. 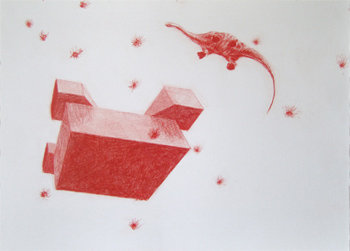 The surrealist writer René Daumal (1908-1944) left his novel, Mount Analogue, unfinished. Its full title was A Tale of Non-Euclidian and Symbolically Authentic Mountaineering Adventures and it described the discovery of an island in the middle of which stood the world's tallest mountain, “linking heaven and earth”. Even though the summit seemed beyond reach, its lower slopes could be climbed since according to Daumel, “the doorway to the invisible must be visible”.

In the early seventies, Slovak artist Július Koller (1939-2007) founded the “U.F.O. Gallery Ganek” on the Ganek Peak of the Upper Tatras Mountains in Slovakia, a place situated between “heaven and earth”. Physically inaccessible, the gallery was only partially fictional because exhibiting artists could build it in their mind's eye, turning it into an intellectual refuge, a space of freedom devoid of any frontiers. The exhibition at Rochechouart underlines parallels between Daumal's novel and Koller's project (the museum has recently acquired a large collection of the latter's works), and may be read as a homage to the artist and his utopian vision. More than thirty pieces drawn from the museum's collection or loaned by other galleries provide a survey of invisible subjective Utopian or fictional spaces that can nevertheless be shared or inhabited by our own thoughts. Included are works by Robert Barry, Marius Boezem, Céleste Boursier-Mougenot, Ian Hamilton Finlay, Dora Garcia, Mario Garcia-Torres, Felix Gonzalez-Torres, Douglas Gordon, Raoul Hausmann, Július Koller, Marcel Märien, Roman Ondak, Nam June Paik, Michelangelo Pistoletto, Tobias Rehberger, Ed Ruscha, a set of artists' books by Seth Siegelaub plus the secret door used by 18th century French economist and statesman Anne Robert Jacques Turgot.

The Musée départemental d’art contemporain de Rochechouart is an initiative of the Conseil général de la Haute-Vienne. Those exhibitions were made possible through the support of the Minister of Culture
(DRAC Limousin).

Flavien's works encompass a wide range of forms, from drawing and architecture to poetry and publishing. Their force derives from an unbounded imagination, fascination with strange events and temporal accidents. Ever since 2002, the enigmatic presence of dinosaurs have haunted a cycle of works he is currently still engaged in making: “[Dinosaurs] mainly interest me because of what they enable me to build and think, and what I can contribute myself. They only emerged in my work because they come from a totally alien world, outside anything I've made before or lived through. They continue to constitute an alien world, or rather this alien world never stops making itself. Their distance from us, helps me re-examine my own ways of working. It facilitates the elaboration of an architecture suited to their existence and the development of ways to exhibit it that correspond to the time scale they inhabited. Each drawing, sculpture or intervention is an attempt to alienate myself from our familiar environment... to create a world where we don't exist.”

For what is his first solo exhibition in a public museum, Jean-Pascal Flavien has chosen to show over sixty drawings, models and films from Viewer, a fictional yet functional architectural structure recently completed in Brazil. The exhibition is accompanied by the printing of a new publication edited by the Devonian Press, jointly founded and run by Jean-Pascal Flavien and Julien Bismuth.