Sagarmatha. The artist work examines the way geography is perceived and represented abstractly and concretely in map, relief, painting form. In the gallery space, a video, like a cloud of crimson suns, is projected and lights up two white and large reliefs: Mount Everest, (Sagarmatha, 'the front of the sky' in Sanskrit). 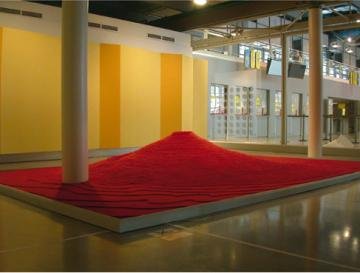 In the gallery space, a video, like a cloud of crimson suns, is projected and lights up two white and large
reliefs : Mount Everest, (Sagarmatha, “ the front of the sky” in Sanskrit). Mount Everest: a geographical utopia, a nineteenth century dream which comes up in a paradoxical world the access to which is nowadays more and more trivial, busy, in which unknown areas move toward virtual territories.

But this mount is also like a geographical paragon linked to History and politics, its rivalries, its covetousness, a “record” space which can be felt through the figures and the picture painted by geography, more than through one's own physical experience.

Here, Monunt Everest stands as a pure object, made of wood painted white, rising like a minimalist peak where each slope becomes another variation echoing those of the moving bulbs of the video projected on the wall...Patterns are repeated and slowly go out of synchronization as with repetitive and psychedelic music.

You experiment the replica of the universe from an ambivalent point of view : you feel as if outside the landscape, rationally seen as a whole (you have an overall view as with a map), and at the same time, you are lost inside it (scales and captions disappear), as if in a “real” space, and therefore inevitably subjective.
The artificial side is emphasized : the circles of the video projection, these “Psycho reliefs” opening out and closing up, look like stars, but are not stars, the highest mountain in the world is reduced to a human scale, a nearly perfect setting, in which “nearly” is perhaps the answer.

The light and rhythm variations, the trace of a digital time passing on the mountain change our visual experience which, with each pulsation, alters the installation and the viewer's perception.