The exhibition presents 30 of the artist's works, including a selection of the Twilight of the Goddess series, showcasing celebrities such as Madonna and Sophia Loren. In addition, Zanolari exhibits his series Dolls, inspired by classic fairy-tale characters, reinterpreted in a contemporary way. 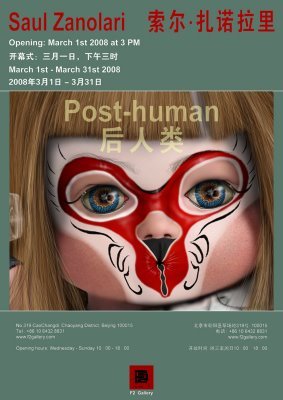 In 1992 Jeffrey Deitch invented the term "Post-human" to define an artistic current which now numbers, among others, Matthew Barney and Jeff Koons. Post-human is the world where we now live, a world of transformation, manipulation and contrivance which is a consequence of scientific and technological advancement, especially in the field of genetics: we are no longer bound to our original appearance, as we now have the opportunity to rebuild and totally change ourselves, passing from a natural human evolution to an artificial one.

The original art works of the young Swiss artist Saul Zanolari, who has absorbed the characteristics of the Post-human current to perfection, will be presented in his first solo exhibition in China at F2 Gallery in Beijing from March 1st to 31st, 2008.

Saul Zanolari's technique, which cannot be placed in a common artistic language, takes the observer by surprise, since his works are neither photographs, paintings or digital designs, but an original combination of them all. He doesn't confine himself to the realism of a picture or the stillness of a painting, but strays from the classical techniques into a personal artistic code. Starting from a simple figurative picture, Zanolari digitally transforms the photo into a whole new portrait in which the protagonist's original identity is undermined by the one of his antagonist, a sort of avatar, who steals natural and human details in order to transform, exasperate or destroy them in a surreal balance between inner identity and exterior body.

The Beijing exhibition at F2 Gallery will present about 30 of Saul Zanolari¡¯s works, including a selection of the Twilight of the Goddess series, showcasing celebrities such as Madonna and Sophia Loren. In addition, Zanolari will exhibit his 2006 series Dolls, a collection inspired by classic fairy-tale characters, reinterpreted in a contemporary way. With his Post-human Dolls the artist looks for new ways to report our childhood stories, showing a Little Red Riding Hood with wooden legs, a Princess and the pea who cries silently, and an Alice in Wonderland dressed up as a fetish waitress. Exclusively for this exhibition, Zanolari has also created three dimensional sculptures of a selection of 6 Dolls.

To complete the event two huge linked compositions will also be presented, symbols of the artist's Chinese experience. Four big eyes, the artist's own in one of the works and a pair of almond-shaped ones in the other, investigate and question a Chinese reality which is still at the centre of intense social, political and environmental debates. These two original works close an exhibition that puts together, for the first time, the greatest part of Zanolari's artistic flair, featuring a young talented artist whose success is his own personal and bizarre artistic language.

Saul Zanolari was born in Mendrisio, Switzerland, in 1977. He has a degree in Philosophy. His work has gained considerable attention in Rome, Milan, Paris, London, New York and Miami.